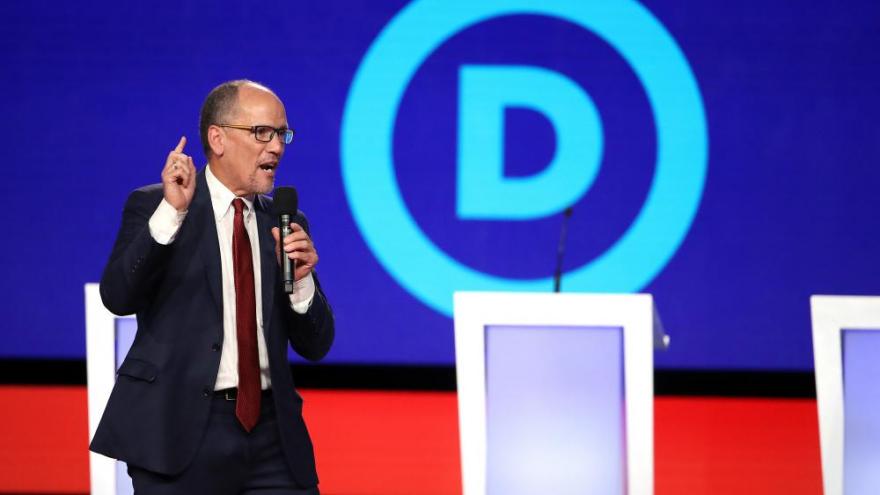 (CNN) -- The Democratic National Committee is on the precipice of a dramatic change, shifting its role from oppositional force challenging Donald Trump at every turn to a political megaphone for a Democrat-dominated Washington.

And the man multiple top Democrats say is expected to become the next chair of the party -- Jaime Harrison, the former South Carolina Democratic Party chair and a Senate candidate in 2020 -- is eager to get to work.

"I don't have the job yet," Harrison said on Thursday, a day after both Senate races in Georgia were called for the Democrats, giving the party control of Congress in Washington. "I hope I get it."

Before the Georgia races were called, Democrats were preparing for President-elect Joe Biden's first years in office to be a slog defined by Republican roadblocks in the Senate. But once Jon Ossoff and Raphael Warnock swept to victory in Georgia, a new reality dawned on Democrats: The Democratic National Committee will not only be an extension of the White House political operation over the next four years, but arguably the party's most potent amplifier to herald and brag about Democratic accomplishments in Washington.

Harrison said he believes, especially after Georgia, that the first job of the DNC will be touting legislative victories.

"The job of doing the work is on the Hill and in the White House, the job of making sure that message gets out and it is promoted and disseminated to voters and so those voters have an understanding of it, I believe that's the job of the DNC," Harrison said, describing the job as getting "that message out" so people "understand this is what you get, when you have Democrats in control."

He added: "The ante has increased dramatically after Georgia."

The scenario also presents a second chance for Biden and his team of advisers, many of whom were top officials during the eight years of Obama's presidency, a time that corresponded with Democratic state parties struggling and significant losses in down ballot races.

In response to questions about how Biden will approach the Democratic National Committee as president, a Biden campaign official said, unlike the Obama White House, the Biden team will not be creating an outside group like Obama's Organizing for America and "instead will be channeling our efforts through the party structure."

"Moving forward, the DNC under President-elect Biden will continue to invest in state parties and maintain a strong partnership with them," the official said, an important point for state party chairs who, more than anything, just want to know that the funding from the national party will continue.

But questions remain about just how the Biden White House will work with the committee, with much of the focus falling to Jen O'Malley Dillon, Biden's incoming deputy chief of staff.

The Democratic National Committee will fall within O'Malley Dillon's purview in the White House, Democratic sources tell CNN, meaning Biden's former campaign manager will be tasked with ensuring that the political committee works in step with Biden's political goals. O'Malley Dillon was the executive director of the DNC after Obama's 2008 election.

Harrison is widely seen by broad swaths of the Democratic Party as the only real contender for the job of party chair. After running the South Carolina Democratic Party, Harrison ran to be party chair after the 2016 election, eventually losing to Perez. Harrison then ran for Senate in 2020, challenging Trump loyalist Sen. Lindsey Graham. While he failed to unseat Graham, Harrison raised his profile and turned himself into a prolific fundraiser, raising over $130 million in what became a nationalized campaign.

The committee will officially consider current chairman Tom Perez's successor, along with a slate of vice chairs and other top positions, at a virtual meeting on January 21. But the decision is primarily Biden's, who will be able highlight his DNC pick ahead of the meeting.

Harrison is seen as a strong pick by Democrats because he has held a number of party roles -- state chair, DNC officer, candidate -- and is viewed as someone who understands what it is like to be a Democrats in a red state the investment needed in places like South Carolina.

The Democratic National Committee thrived in resistance to Trump over the last four years under Perez, turning what had been a rudderless and scandal-prone organization into a key figure in Biden's win. The shift helped Democrats shatter fundraising records.

When Perez took over the DNC in 2017, party loyalists were aghast at two key issues: The state of disrepair inside the committee after the departure of former chair Debbie Wasserman Schultz and the level of distrust raging among more progressive Democrats over how Bernie Sanders was treated in his 2016 nominating fight against Hillary Clinton. Perez got to work on addressing both those issues, investing millions in rebuilding the party's infrastructure and overseeing the creation of the Unity Reform Commission that studied the issues that led to the widespread mistrust.

And, by many measures, the work paid off. Heading into 2021, according to party officials, the base of donors who give to the committee every month is twice as high as it has been at any points in the committee's history. The party raised $102 million in online fundraising alone in 2020, dwarfing the $61 million they raised in 2004, what had previously been their best year.

Perez, reflecting on the last four years, said that whoever takes over for him in the coming weeks will have a job much more focused on touting wins than cleaning up after losses.

"I'm a firm believer that good governance is great politics," Perez said in an interview with CNN. "But what I've learned from 2009 and 2010 is that the misinformation campaigns that are going to come out there are going to be relentless. And so we need to make sure that we are not only delivering on our promises, but communicating to people across this country, exactly what we are doing."

With the committee's role changing, however, Democrats are now facing stark reality: For as bad as the Democratic National Committee argued Trump was for the country, he was stunningly good for business.

"Donald Trump was the best tool the Democratic Party ever had," said Chris Korge, the committee's national finance chair.

Trump provided Democrats cover for four years, tamping down much of the interparty fights that mired the committee ahead of the 2016 election and allowing the party to focus more directly on defeating every Democrat's shared enemy -- Trump. He also boosted excitement among Democrats and surged fundraising numbers.

"One of the challenges that we obviously can try to say while we defeated Trump, we haven't yet defeated Trumpism," Perez said. "Trumpism is something that persists across America. There's no doubt about it."

Harrison said he does not worry about the future of the party after Trump, arguing that continuing to invest in infrastructure and build out parties across the country will make the party into a resilient force beyond the Trump presidency. At the heart of that, he said, was Biden, who he argued was a committed party builder.

"I believe President-elect Biden has the potential to not only be an amazing president," Harrison said, "but to be one of the best, if not the best party builders that we have seen in my lifetime."

For Biden, the prospect of a Democratic National Committee focused on investing in state parties and down ballot races is a second chance.

Although President Barack Obama invigorated Democrats in his two runs for president, even loyal party members believe one area where he failed was in growing the party's political infrastructure, instead focusing his attention on his own outside political committee following his wins in 2008 and 2012. The results were disastrous for the party, including a Democratic National Committee that was in shambles by 2016 and substantial losses to state legislatures across the country.

"When I got to the DNC, we had not only a crisis of confidence, but we had an infrastructure that was embarrassingly bereft of the critical components," said Perez, noting that in the days following Trump's election, the DNC has little capacity to mobilize around what was a groundswell of opposition to the Republican leader.

While Biden was not the top political figure in the eight years that saw the DNC fall into disrepair, he and a number of people close to him were in positions of power and some Democrats have worried the same mistakes that mired the Obama years could follow in the Biden White House.

In a sign of hope for Democrats, the Biden campaign and Democratic National Committee worked closely during the 2020 campaign, running a coordinated effort that included both the national committee and state parties. And a Biden campaign official told CNN that both Biden and Vice President-elect Kamala Harris "understand the important role the DNC and state parties play" in the Democratic ecosystem.

"Everything happens in a historical context," Weaver said. "President Obama's relationship with the party apparatus was not great in 2008, but we are in a different place now and the challenges facing the party are different."

Now that Democrats have succeeded in ousting Trump, top Democrats believe the way to continue much of the work that happened over the last four years is to commit to building on the party's infrastructure.

"What's really important and not necessarily easy is to build upon the infrastructure improvements that have been made in the last four years," said Rep. Grace Meng, a committee vice chair. "The easiest thing and the last thing we want to do is to go backwards and not build upon the success that we already have made in the last few years and take voters for granted."

To other Democrats, though, the lessons from Trump are more existential, and highlight the need to create a specific brand that confronts the fact that Trumpism will be a resilient force in politics for years to come.

"Trump is still going to be around. The wannabes will be around. The Republican Party is the Party of Trump now," said Kelly Dietrich, the founder and CEO of National Democratic Training Committee. "We need to learn some of the lessons from Trump. Nobody ever says, 'Oh, Obama shouldn't have done so much his first two years.' No, forget that, we should be overwhelming people with action and then bragging about it, holding people's feet to the fire."

He added: "I would rather not believe (that aspects of Trump's style works), but that's not how life works."

CORRECTION: An earlier version of this story contained a transcription error in Kelly Dietrich's quote.