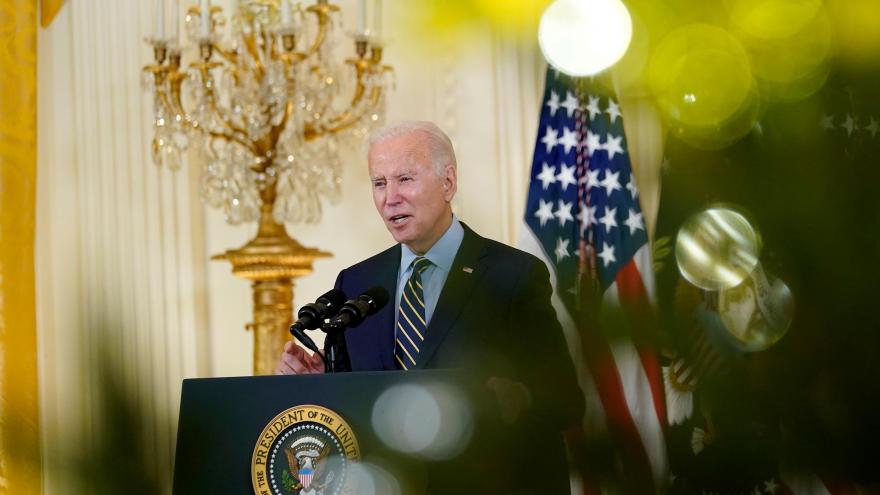 (CNN) -- President Joe Biden on Thursday took the next step in his plans to promote democracy against rising autocracies when he convened a virtual "Summit for Democracy," which hosted more than 100 participants representing governments, civil society and private-sector leaders.

"In the face of sustained and alarming challenges to democracy, universal human rights, and all around the world, democracy needs champions," Biden said as he kicked off the summit, adding this summit "has been on my mind for a long time."

The President continued: "I wanted to host this summit because ... here in the United States we know as well as anyone that renewing our democracy and strengthening our democratic institutions requires constant effort."

"American democracy is an ongoing struggle to live up to our highest ideals and to heal our divisions and recommit ourselves to the founding idea of our nation captured in our Declaration of Independence, not unlike many of your documents," Biden said.

The virtual gathering of leaders is focused on combating corruption, defending against authoritarianism and promoting human rights. It's part of a broader theme Biden has frequently reinforced throughout his time in office -- that the global competition of the 21st century is one defined by democracies versus autocracies and America has a responsibility in ensuring democracies prevail.

Since coming into office last January, Biden has promised to hold the gathering as a show of force against autocracies around the world. The administration is facing some criticism for its guest list for the summit. Invitees include representation from nations with spotty records on democracy, the rule of law and human rights, including the Philippines, Pakistan, Nigeria, Brazil and Turkey.

White House principal deputy press secretary Karine Jean-Pierre told reporters on Wednesday that the focus of the summit will be "on what the President has called 'the challenge of our time' -- reversing the ongoing global democratic recession and ensuring that democracies deliver for their people."

The summit comes after a week of Biden confronting two emerging global, authoritarian superpowers -- Russia and China -- over their actions.

Earlier this week, Biden held a two-hour call with Russian President Vladimir Putin -- threatening economic sanctions against Russia in an attempt to dissuade him from invading Ukraine. The White House also recently announced that American diplomats would boycott the 2022 Winter Olympic Games in China in response to the country's ongoing human rights abuses.

The President is separately expected to speak with Ukrainian President Volodymyr Zelensky "to discuss Russia's military buildup on Ukraine's borders" and the Bucharest Nine group "to brief them on his call with President Putin, hear their perspectives on the current security situation and underscore the United States' commitment to trans-Atlantic security."

Ahead of the summit, the White House highlighted provisions in Biden's social safety net bill, which has yet to be passed by the Senate. The administration says many of the provisions will "make critical investments in American democracy," such as expanding access to broadband, establishing a Civilian Climate Corps, investing in civic infrastructure and providing tax credits for local newsrooms.

A White House statement ahead of the summit also promoted the administration's "decisive action to restore and strengthen American democracy, from cracking down on corruption and promoting transparency to taking critical steps to ensure the federal government works for every American -- no matter what they look like or where they live."

"This cause will be a guiding principle throughout the President's time in office, and that includes prioritizing the fight to pass the Freedom to Vote Act and the John Lewis Voting Rights Advancement Act to protect the sacred right to vote in free, fair, and secure elections," the statement said.

When asked on Wednesday whether the President would use the summit to address what he's doing to uphold democracy in the US -- including in regard to the January 6 insurrection and the struggle to get voting rights legislation passed -- Jean-Pierre said, "I don't want to get ahead of what the President is going to say tomorrow. But ... all the things that you just mentioned ... are clearly things that the President feels are key and important things that we need to address here in our country."

Along with existing actions, the White House has put forward new initiatives aimed at the summit's goals.

On Wednesday the White House announced that an interagency Information Integrity Research and Development Working Group will develop a strategic plan "to better understand the full information ecosystem."

Also on Wednesday, "day zero" of the democracy summit, Secretary of State Antony Blinken announced that the US will provide new funding to protect reporters who are targeted because of their work and to support independent international journalism.

The new "liability fund" will support "reporters and news organizations that are targeted with litigation as a result of their reporting," said Blinken.

Following the summit, the Biden administration "will convene governmental, civil society and private-sector partners during a year of consultation, coordination and action to advance democracy," the White House said.

The White House says Biden intends to gather world leaders again in a year "to showcase our collective progress and forge a path forward."