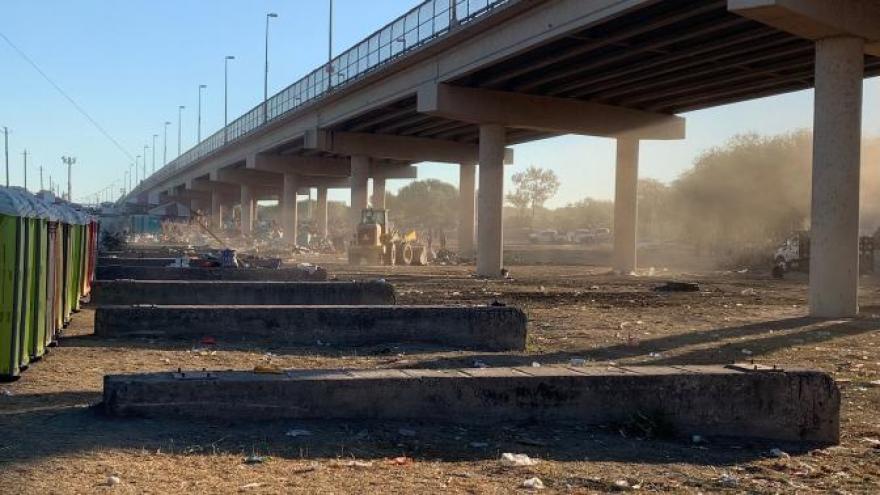 CNN obtained new images from under the Del Rio International Bridge, taken Friday by a law enforcement official inside the secured perimeter. The images show current conditions after authorities began cleaning up the makeshift camp on Thursday.

(CNN) -- After several days of living in squalid conditions under the Del Rio International Bridge, the last remaining migrants departed a makeshift camp there just before noon local time on Friday.

A CNN team captured images under the bridge of the final two buses as they departed for US Customs and Border Protection processing centers.

A surge of migrants -- many of them Haitian -- had converged on the temporary site at the bridge, the result of word-of-mouth or social media posts saying that the border at Del Rio was open, US Border Patrol Chief Raul Ortiz previously said. At times the number topped 14,000.

Chaotic scenes at the bridge, including law enforcement on horseback using aggressive tactics against migrants, had sparked anger from both local and federal officials.

US Customs and Border Protection facilities along the US-Mexico border are at capacity or over capacity as officials try to process migrants moved from Del Rio in addition to the usual flow, a Department of Homeland Security official told CNN.

Some of those processed at these facilities will be released on a case-by-case basis -- for example, based on a determination of vulnerability -- while the majority is likely to be expelled, the official said.

Homeland Security has been moving migrants to other processing facilities along the US southern border to empty the camp under the Del Rio International Bridge. According to DHS, more than 3,900 Haitians have been moved from the Del Rio camp to CBP custody or other sectors of the border to be processed.

Homeland Security Secretary Alejandro Mayorkas told CNN's Wolf Blitzer Thursday that a "very small percentage of the total that assembled in Del Rio, Texas" have been released in the United States while officials continue removal proceedings.

"It's a minority of the individuals," Mayorkas said, adding: "They are placed in immigration enforcement proceedings where they appear before a judge and if they in fact, make a valid claim to remain in the United States, then of course we honor that. And if not, they are removed as well."

DHS officials have declined to provide a number of how many migrants have been released.

Mayorkas confirmed in a news conference Friday that no migrants remained beneath the Del Rio bridge, telling reporters the situation was the "result of an unprecedented movement of a very large number of people moving to a single point."

In his own news conference, Lozano said the fact no migrants were left was "phenomenal news."

The rush of migrants had prompted officials to close the bridge temporarily, and in terms of financial loss, Lozano said there was a deficit of $17,000 a day in tolls alone.

"We're reaching out to our business communities to see how that's impacted them as well, just because we also have employees that have had to detour up to four hours to get to work," Lozano said, adding, "I can tell you that it has been a big toll on businesses, on industry and also the schoolchildren that were going to school here in the United States to the private charter schools."

The bridge will remain closed for another 48 to 96 hours, Lozano said, while officials assess the area around it. That effort includes ensuring the environment is clean by picking up trash that had been left behind, he said.