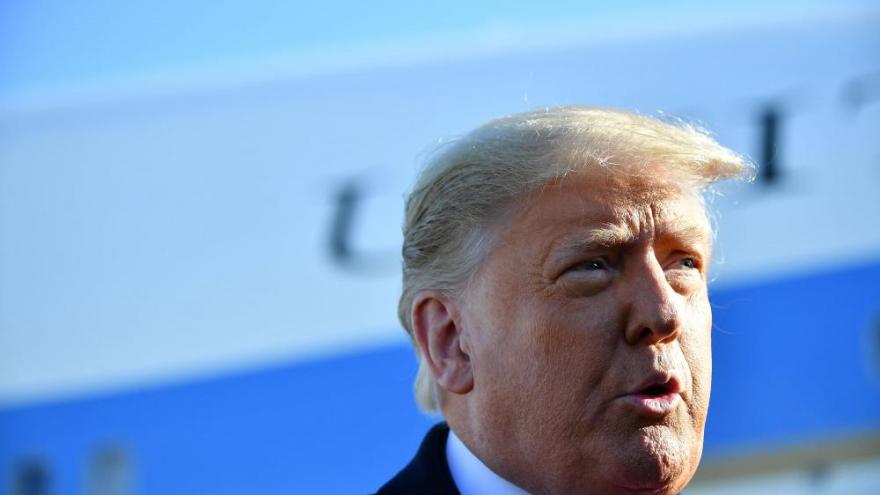 President Donald Trump speaks to the media as he makes his way to board Air Force One before departing from Andrews Air Force Base in Maryland on January 12.

(CNN) -- A defiant President Donald Trump insisted Tuesday his speech inciting the riot at the US Capitol was "totally appropriate" while at the same time calling for "no violence" in his first public remarks to reporters after the insurrection last week.

Later, Trump likened attempts to impeach him for a second time to a "witch hunt" and baselessly warned that his successor, President-elect Joe Biden, might be removed from office himself.

Trump assumed no responsibility for what happened last Wednesday, despite telling his supporters in the hour beforehand to "fight like hell." And he did not specifically decry attempts to find and kill political leaders, including his own vice president.

Instead, speaking at the White House and later at Joint Base Andrews before departing for Texas, Trump suggested attempts by Democrats and tech companies to rein in his dangerous rhetoric could themselves lead to violence.

He falsely said those who'd analyzed his remarks before the deadly insurrection attempt had found no fault in them.

"They've analyzed my speech, my words," he said. "Everybody to a T thought it was appropriate."

It was a characteristically belligerent stance for a President who enters his final week in office under looming threat of a second impeachment. As he has previously, Trump sought to deflect blame on Democrats and equivocated on his own role in fomenting dangerous behavior.

He claimed the "real problem" is what other politicians said about protests over the summer in Seattle and Portland, Oregon.

It was only in an aside that he said: "You always have to avoid violence."

Standing in front of a newly constructed stretch of border wall, Trump opened his speech by declaring: "Free speech is under assault like never before."

"The 25th Amendment is of zero risk to me, but will come back to haunt Joe Biden and the Biden administration," he said without evidence, referring to renewed talk of invoking the Constitution to remove him from office.

Only in a brief scripted portion of his speech did Trump appeal for "peace and calm."

"Now is the time for our nation to heal," he said, the sentiment entirely undercut by his attacks on Democrats and tech companies.

Earlier, as he departed the White House, the President denounced Democrats pursuing his historic second impeachment, seeming to imply they could provoke a violent response.

He similarly said the decisions by Twitter, Facebook and other platforms to suspend his accounts were causing fury among his supporters -- suggesting that could itself cause violence, and not his own language fanning violence among his base.

"It causes a lot of problems and a lot of anger," he said. "There's always a counter-move when they do that."

Trump's remarks on the White House South Lawn were his first in days and his first engagement with reporters in weeks.

He has isolated himself in the White House following riots at the US Capitol that he incited during a rally in the hour beforehand.

Senate Democratic Leader Chuck Schumer said on Tuesday that Trump's comments taking no responsibility for the attack on the Capitol were "despicable."

"What Trump did today, blaming others for what he caused, is a pathological technique used by the worst of dictators," said Schumer. "Trump causes the anger. He causes the divisiveness. He foments the violence and blames others for it. That is despicable."

Trump was slow to condemn the protests, which he watched on television from the dining room next to the Oval Office. He was convinced by advisers that a forceful denunciation of his own supporters was necessary, both because he was facing removal from office and because he faces potential legal questions about his role in inciting the riots.

Later, Trump appeared to some aides to regret taping a video in which he denounced the violence and conceded he would not be serving a second term in office.

Trump spent the weekend largely in isolation, as aides either distanced themselves from him or limited their time in his presence. Trump canceled a planned trip to Camp David, where his closest aides were hoping he would get into a good mindset ahead of his final stretch in office. Instead, he spent the weekend stewing to his deputy chief of staff, Dan Scavino, and entered his final full week angrier than ever.

Despite Trump's comments Tuesday, advisers and lawyers speaking with Trump in recent days have encouraged him to soften his rhetoric and denounce violence in order to reduce his legal liability for the deadly insurrection at the Capitol, two sources familiar with the discussions told CNN's Jim Acosta.

"Lawyers have been recommending a de-escalation of rhetoric, not just for the good of the country, but also to reduce the risk of legal jeopardy," one source familiar with the discussions said.

The sources said Trump has been told in the days following the siege at the Capitol that he could be charged with inciting violence by local and federal authorities and be sued by relatives of the victims who were harmed in the insurrection.

"He absolutely can be sued," a separate source said, reflecting concerns among Trump's advisers that the President's actions have once again put himself in legal jeopardy.