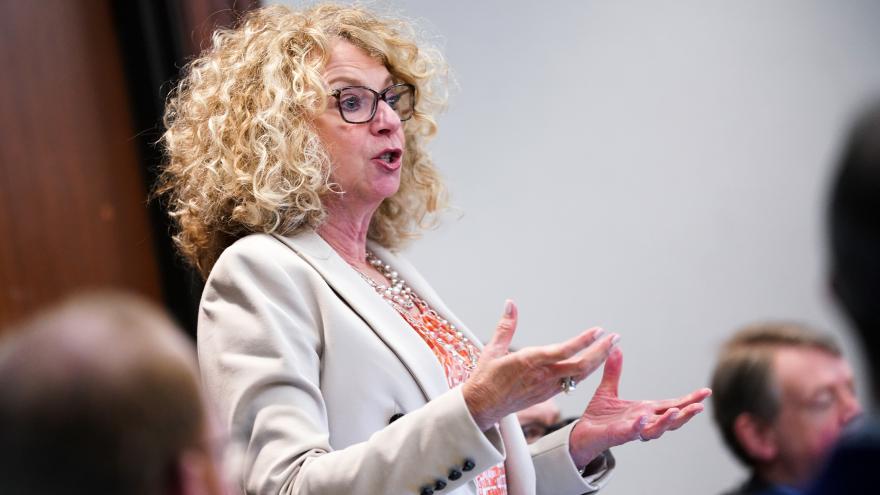 (CNN) -- A sentence uttered by a defense attorney in the trial of those accused in the killing of Ahmaud Arbery brought an audible gasp from people in the courtroom Monday -- and elicited outrage from his family and legal experts.

The defense attorneys for Gregory and Travis McMichael, who are charged with Arbery's murder, repeatedly have tried to present Arbery as a criminal. On Monday, Laura Hogue, one of Gregory McMichael's lawyers, went further.

"Turning Ahmaud Arbery into a victim after the choices that he made does not reflect the reality of what brought Ahmaud Arbery to Satilla Shores in his khaki shorts with no socks to cover his long, dirty toenails," Hogue told jurors.

Arbery was Black. The three defendants, who also include William "Roddie" Bryan, are White and face charges including malice and felony murder in the killing of Arbery after chasing him in a neighborhood near Brunswick, Georgia, on February 23, 2020. They have pleaded not guilty.

Arbery's mother, Wanda Cooper-Jones, got up and left the courtroom after Hogue's remark, saying "I gotta get out of here."

Later Monday, she told CNN that the comment was very disturbing.

"I thought it was very, very rude to talk about his long, dirty toenails and to totally neglect that my son had a huge hole in his chest when he was shot with that shotgun," she said.

The defense is just trying to deflect from the fact that they "don't have the proper evidence to get a conviction," Cooper-Jones said.

"So they're actually going to any measure to get it, to get a conviction, which is not there for them," she said.

In that moment, Hogue took the opportunity to portray Arbery as a "runaway slave," said Charles Coleman Jr., a civil rights attorney and former prosecutor

"Her word choice was intentional, her descriptions were unnecessary. And the description ultimately is inflammatory," Coleman told CNN.

It was an "attempt to sort of really trigger some of the racial tropes and stereotypes that may be deeply embedded in the psyche of some of the jurors," Coleman said.

Glynn County, where the trial is being held, is made up of 69% White residents and 27% Black. Just one of the 12 jurors is Black.

"It was disrespectful, it was horrific, and attorney Hogue should be ashamed of herself, to bring up his feet in the middle of trial. What is wrong with you?," said civil rights attorney L. Chris Stewart,

"Not only disrespecting Ahmaud, but you know his mother's right there. It was horrific," Stewart said.

Hogue's comment appears to be based on the autopsy of Arbery's body by the forensic sciences division of the Georgia Bureau of Investigation, which states that "the toenails are long and very dirty."

Former prosecutor Mark Eiglarsh said Hogue had the pulse of the jury.

"I did find the defense lawyer's comments, personally, extremely offensive," Eiglarch said. "That said, I'm going to defend her right to make it, because her job is to do everything that she can to get an acquittal, as long as it's within the confines of what the law allows."

"As outrageous and offensive as I found it personally, I know that she wouldn't have made it if she didn't think it would resonate with those particular jurors," Eiglarsh said. "And that's what she did."

Monday's closing statements by the defense attorneys follow 10 days of proceedings and testimony from 23 witnesses.

On Tuesday, prosecutor Linda Dunikoski will give her rebuttal.