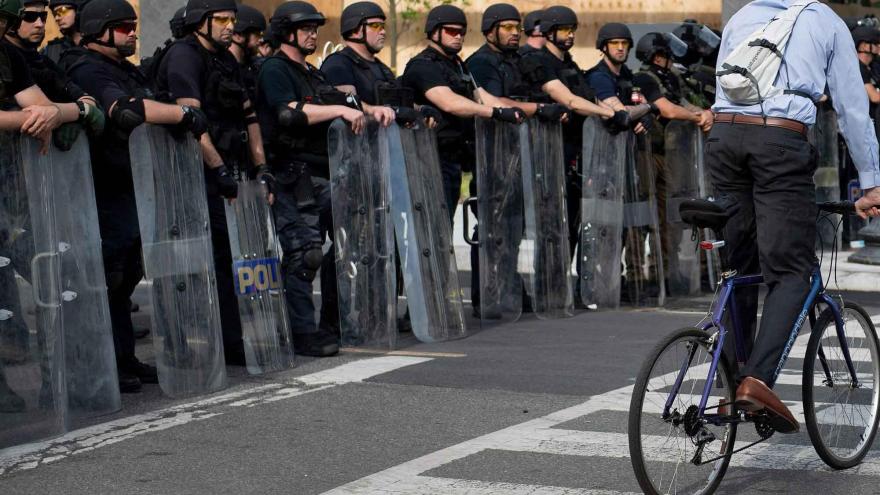 Members of the Federal Bureau of Prisons and other law enforcement block 16th Street, NW near the White House during protests over the death of George Floyd.

(CNN) -- Federal agents patrolling American streets without badges or insignias identifying who they are would become a thing of the past if a defense bill working its way through Congress becomes federal law.

The proposed bill, summarized in a conference report this week by the House Armed Services Committee, would specifically require federal officers and members of the armed forces and National Guard dispatched to assist federal authorities in response to civil disturbances to visibly display their name or other unique identifier, such as a badge number, on their uniform, as well as the name of their agency.

The bill includes an exception for federal agents working in an undercover capacity.

The fate of the NDAA in its current form remains unclear. On Tuesday, President Donald Trump threatened to veto the legislation unless Congress removes legal protections for social media companies as part of the bill, setting up a showdown with Congress over legislation that would also give troops a raise and set defense policy.

The controversy surrounding anonymous, tactically equipped federal officers in public came to light during demonstrations across the country earlier this year as hundreds of thousands of protesters took to the streets following the death of George Floyd at the hands of Minneapolis police officers.

In the nation's capital and cities across the country, federal and state forces were deployed to provide security as some demonstrations turned violent with rioters attacking law enforcement and buildings.

In some instances, including outside the White House, heavily armed people were seen blocking protesters, but had no apparent insignias or markings on their uniforms to identify them as federal forces.

In other areas across the country, city officials received reports that police officers had covered up their badge numbers while on patrol.

Following the uproar over the use of unidentified federal agents to quell civil unrest, Attorney General William Barr defended the practice.

CNN has reached out to the Justice Department for comment on the new draft legislation that will require officers to identify themselves.

Another flashpoint this year occurred in Portland, Oregon, as federal agents were sent into the city by the Trump administration to quell weeks of nightly rioting targeting a downtown federal courthouse.

In July, the US attorney in Oregon requested an investigation into reports of masked, camouflaged federal authorities without identification badges arresting protesters in Portland.

In one viral video posted online, tactical officers were seen arresting a man and taking him away in an unmarked van. While the individuals wore police insignias, they refused to answer questions from bystanders about what they were doing as they took the man into custody, adding to the already tense relationship between some demonstrators and law enforcement in the city.

The officers were later identified as agents from US Customs and Border Protection. In a statement, the agency said the individual seen in the video was suspected of "assaults against federal agents or destruction of federal property," and that they moved the individual to a safer location for questioning after they saw "a large and violent mob move towards" them. CNN could not independently verify what happened before or after the video was recorded.

"You will not see names on their uniforms [because] these same violent criminals use this information to target them & their families, putting both at risk," he wrote on Twitter, adding, "as Acting Commissioner, I will not let that happen!"

But critics of the use of anonymous officers slammed the practice and equated such actions to those done in authoritarian states.

"There is no generic DOJ police force, obviously," tweeted Matthew Miller, former Justice Department spokesman in the Obama administration, after images surfaced appearing to show unidentified forces fanned out in Washington. "No badges, no identifying info, refusal to say who they represent - it's like Russia's little green men have taken over the nation's capital."

Security experts also raised concerns about whether unidentified federal officers could be mistaken for armed militia members, who often dress up in military-like clothing and have been seen at various demonstrations across the country.

The bill will also require "annual training by participating law enforcement agencies in de-escalation of force, and respect for the rights of citizens under the Constitution of the United States," according to the House conference report summary released this week.