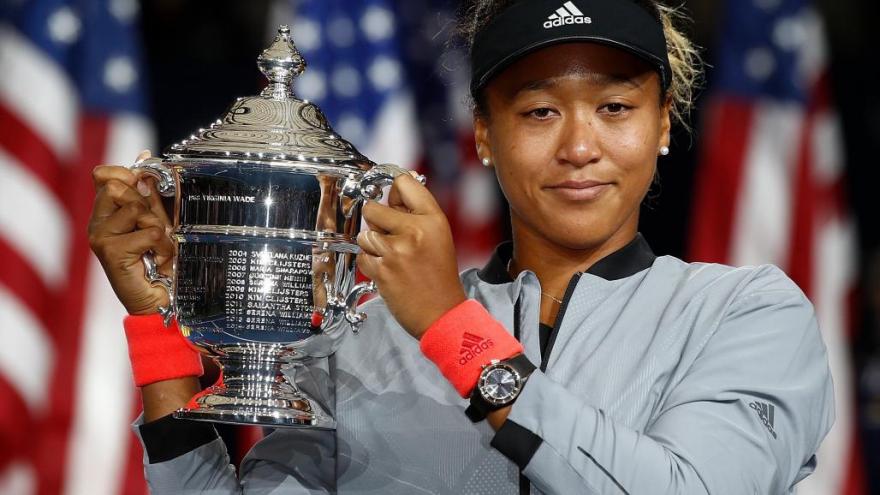 In a blockbuster third-round matchup and in their first career meeting, the world No. 1 and 21-year-old from Japan bested the 15-year old American 6-3, 6-0 on Saturday to advance to the round of 16.

(CNN) -- Coco Gauff will not match her magical Wimbledon run -- and Naomi Osaka's quest to defend her US Open title continues.

In a blockbuster third-round matchup and in their first career meeting, the world No. 1 and 21-year-old from Japan bested the 15-year old American 6-3, 6-0 on Saturday to advance to the round of 16.

After the match, in a move not seen often in tennis, Osaka embraced Gauff and asked the teen if she would share her interview with her on court at Arthur Ashe Stadium.

Gauff initially said she didn't want to do it, because she knew she would cry.

"She encouraged me to do it," Gauff said through tears to ESPN.

Gauff went on to say: "I'm going to learn a lot from this match. She's been so sweet to me, so thank you for this. Thank you."

After Gauff finished her interview, she said, "Thank you, Naomi. I don't want people to think that I'm trying to take this moment away from her, because she really deserves it."

Before ESPN could ask Osaka a question, she went up to Gauff and gave her another hug, which drew roars from the crowd.

"I don't think I'm a mentor," Osaka said to ESPN, and then turned to Gauff's player box, which included the teen's parents. Both Osaka and Gauff live in Florida and have known each other for a few years.

"You guys raised an amazing player," Osaka said through her own tears.

"I remember I used to see you guys training in the same place as us," Osaka continued. "For me, like the fact that both of us made it, and we're both still working as hard as we can, I think it's incredible. I think you guys are amazing. I think, Coco, you're amazing."

'It's better than crying in the shower'

Gauff became an overnight sensation in July when she reached the fourth round of Wimbledon, beating the likes of Venus Williams in the process.

In her run, she also became the first 15-year-old to reach the last 16 at Wimbledon since Martina Hingis in 1996. Gauff's Wimbledon came to an end at the hands of eventual champion Simona Halep, who lost Thursday to 23-year-old American Taylor Townsend.

"After the match, I think she just proved that she's a true athlete," Gauff said. "For me the definition of an athlete is someone who on the court treats you like your worst enemy but off the court can be your best friend. I think that's what she did tonight."

Gauff also said she was glad she was able to experience that moment with Osaka, and she shared some of what Osaka said to her.

"She told me it's better than crying in the shower," Gauff said. "She convinced me, like, multiple times to stay. I kept saying no. Finally I said, 'OK, I'll do it.' Because I didn't know what to do. I'm happy that she kind of convinced me to do it because, I mean, I'm not used to crying in front of everyone."

For Osaka, she said her decision to ask Gauff to do the interview with her was instinctive.

"When I shook her hand, I saw that she was kind of tearing up a little," Osaka said to reporters at her press conference. "Then it reminded me how young she was.

"For me, at least when I lose, I just come into the locker room and I cry, then I do press, like, here. I love you guys, but it's not the greatest. Then I was thinking normal people don't actually watch the press conferences unless they're, like, fan fans.

"The people that are out there, they're probably going to just stay and watch the next person who's playing, then they go home, and they wouldn't know immediately what's on her mind.

"I was just thinking, like, it would be nice for her to address the people that came and watched her play. They were cheering for her."

Osaka next will face No. 13 seed Belinda Bencic of Switzerland, who received a walkover to the fourth round when Anett Kontaveit withdrew ahead of their match due to illness. Bencic leads Osaka 2-1 in the head to head. Those two wins from the Swiss came this year, at Indian Wells and Madrid.

Osaka became the first Japanese player to win a major singles title when she defeated her idol, Serena Williams, in last year's US Open final, making her a megastar. The Japanese-Haitian, who has dual Japanese and American citizenship, won her second grand slam crown at the Australian Open in January. She is bidding to become the first woman to defend the US Open since Serena Williams won three in a row from 2012 to 2014.

This was Gauff's first match against an opponent ranked in the top 5 in her career. She was looking to be youngest player to reach the fourth round at the US Open since Anna Kournikova in 1996.

The youngest player in the draw, Gauff was making her US Open singles debut as a wild card. Her tournament is not yet complete, however, as she's teaming up in women's doubles with 17-year-old fellow American Caty McNally, who lost to Serena Williams on Wednesday.

Gauff and McNally defeated Julia Goerges and Katerina Siniakova in the first round and will face the No. 9 seeds, Nicole Melichar and Kveta Peschke, in the second round Sunday. The pair claimed the women's doubles title at the Citi Open in Washington earlier in August. In 2018, Gauff and McNally won the US Open girls' doubles title.