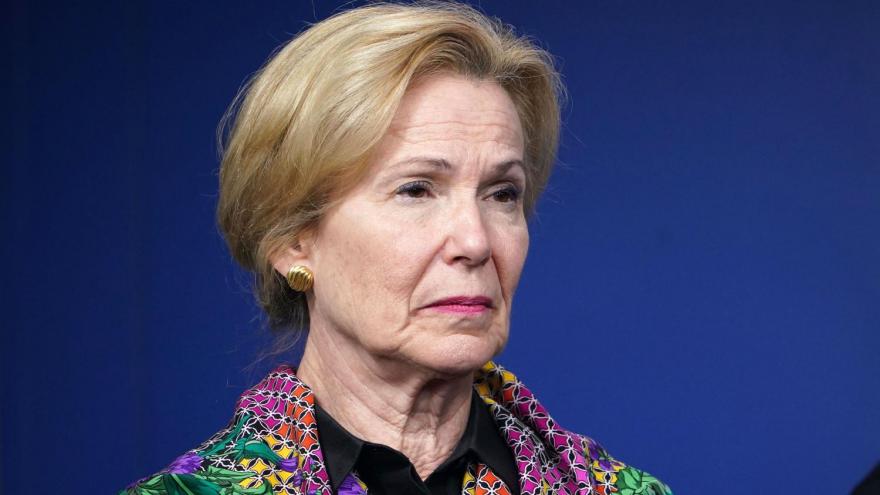 Deborah Birx has not been approached by team Joe Biden about staying on as a government employee. Birx, in this image, listens as US President Donald Trump speaks at the White House in Washington, DC on April 20, 2020.

(CNN) -- Dr. Deborah Birx has privately told colleagues she has not yet been contacted by anyone on President-elect Joe Biden's team, and whether she will be staying on as a government employee in the fight against the coronavirus pandemic remains up in the air.

While not publicly commenting on what her future plans could entail, Birx has privately expressed interest in keeping her current role as coordinator of the White House coronavirus task force, or a similar position within a Biden-led government.

On Monday morning, Biden announced members of his new coronavirus task force and outlined his plans to combat the virus as case counts continue to balloon across the United States. Despite the challenges of a foreboding winter season, and what promises to be a complicated presidential transition, Birx has indicated to friends she has no desire to give up her career as a public servant and enter the corporate world, which could certainly be an option.

The White House did not immediately responded to CNN's request for comment. The Biden team declined to comment.

Birx has been a government employee since 1980 when she joined the Army shortly after receiving her medical degree, and is now one of the country's top immunologists.

A major caveat that could prevent Biden's from reaching out to Birx thus far involves the new administration having to get permission from the current administration if it wishes to employ or officially approach anyone in the executive branch or any federal post.

Biden cannot technically move to form a government using current federal employees until his January inauguration, unless permission from President Donald Trump is granted to do so. Trump has not conceded to Biden or publicly accepted his loss. The President instead continues to baselessly contest the results of the election.

In recent months, Birx has not been at the White House as much as she was in the early days of the pandemic, choosing instead to travel the country and speak about Covid-19 prevention best practices on a state and local level.

The desire to hit the road was spurred by intense clashes with Dr. Scott Atlas, the doctor Trump has most recently relied on to receive his coronavirus information -- much of it not supported by scientific evidence.

Birx vowed in August to never again be in a face-to-face meeting with Atlas, whose medical opinions about Covid-19 she vehemently opposes.

Though her visual presence beside Trump at press briefings has diminished -- along with the briefings themselves -- one person who has known Birx for more than a decade says her association with the current administration could be too strong for the new one to keep her on, despite her desire to remain.

The source reminded, however, if anyone could make a tricky transition, it's Birx, who moved from senior positions in George W. Bush's administration to Barack Obama's before the current administration.