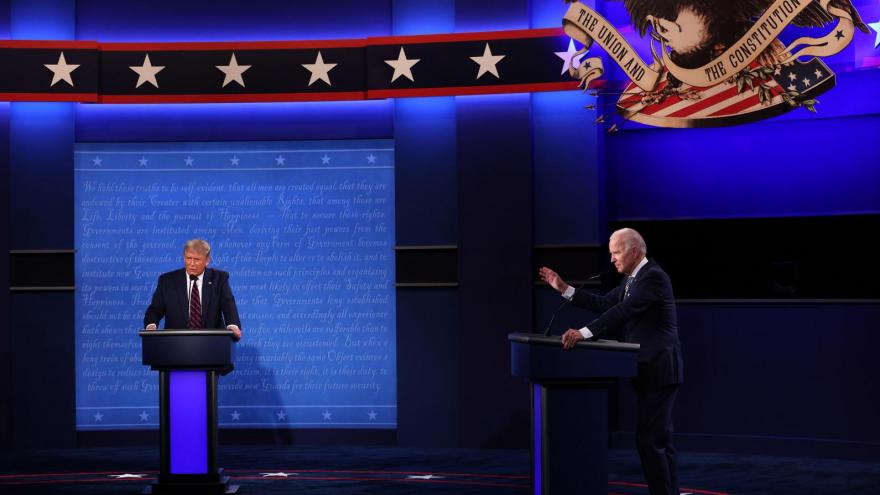 (CNN) -- The Commission on Presidential debates announced on Friday the six topics for the second and final debate between President Donald Trump and Democratic nominee Joe Biden set to take place next week.

The final debate between Trump and Biden is scheduled to take place on October 22 from 9 p.m. to 10:30 p.m. ET in Tennessee. The format is the same as the first debate: Each segment will last about 15 minutes, and the candidates will have two minutes to respond after the moderator, NBC's Kristen Welker, opens each segment with a question. Welker will then use the rest of the time in the segment to facilitate further discussion on the topic.

In Friday's announcement, the commission did not explain any further rule changes for the final contest, something it said it would do after the first debate between the presidential candidates devolved into a chaotic affair with the President flouting the rules and repeatedly interrupting the former vice president. The day after the first debate, the commission acknowledged the chaos of the night before and said it would look into rule changes in order to "ensure a more orderly discussion."

"The Commission on Presidential Debates sponsors televised debates for the benefit of the American electorate. Last night's debate made clear that additional structure should be added to the format of the remaining debates to ensure a more orderly discussion of the issues," a September 30 statement from the CPD reads.

The commission did not specify what changes they would be making, but their statement at the time said they intended "to ensure that additional tools to maintain order are in place for the remaining debates," and that they would be announced "shortly."

The chaos of the first debate, which was marked by frequent incoherent cross talk, left a stain on the contest. Trump frequently interrupted and heckled Biden and ignored repeated pleas from the debate moderator, Chris Wallace of Fox News, for Trump to stick to his allotted time. At one point, an exasperated Biden turned to the President and said, "Will you shut up, man?"

Trump and Biden were supposed to debate on Thursday, but that debate was canceled after Trump declined to participate in a virtual debate. The commission changed the format to a virtual debate due to the President's positive coronavirus diagnosis earlier this month, which left him hospitalized for three days.

Both candidates instead participated in town halls on the night the debate was originally scheduled to take place. Biden appeared on ABC for an hour and a half town hall, and Trump appeared on NBC for an hour-long town hall.

Biden has made clear that he wants the debate commission to change the rules ahead of the third contest, and said the way Trump conducted himself at the first debate was a "national embarrassment."

"I just hope there's a way in which the debate commission can control the ability of us to answer the questions without interruptions," Biden told CNN's Arlette Saenz the day after the first debate. "I'm not going to speculate on what happens in the second or third debate -- my hope is that they're able to literally -- say the question gets asked of Trump, he has a microphone, he has two minutes, no one else has the microphone, and then I don't know what the rules are going to be. That seems to me to make some sense."

The Trump campaign has come out against any changes to the rules. Campaign communications director Tim Murtaugh told CNN in a statement after the first debate that the commission "shouldn't be moving the goalposts and changing the rules in the middle of the game."

"They're only doing this because their guy got pummeled last night," Murtaugh said. "President Trump was the dominant force and now Joe Biden is trying to work the refs."