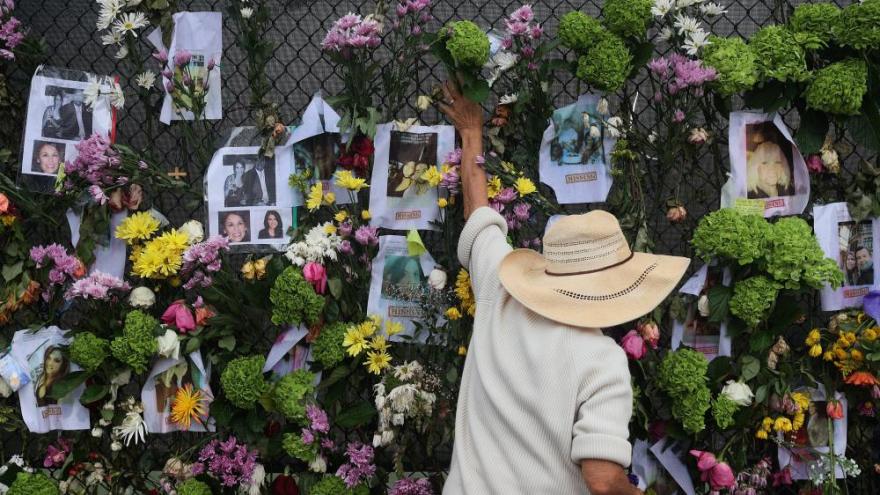 A person adds flowers to a memorial that has pictures of some of the missing from the partially collapsed Champlain Towers South condo building in Surfside.

Rescue crews found another victim of the South Florida condo collapse on Tuesday, bringing the death toll from the tragedy to 12, Miami-Dade Mayor Daniella Levine Cava said at an afternoon news conference.

A total of 149 people are unaccounted for, she added.

The commander of an Israeli team helping to search the rubble of a deadly condominium building collapse in South Florida told CNN on Tuesday that he still had hope for finding people alive.

Col. Golan Vach, commander of the Israeli National Rescue Unit, said that while this is the most difficult site he has ever worked, his team found new spaces in the rubble to search Monday and Tuesday.

"So there is still hope," Vach told CNN's Wolf Blitzer. "Until one week, I have a solid hope that we will find someone. After one week, it's minor."

The building partially collapsed in the middle of the night last Thursday.

Vach's team comprises 15 engineers, search and rescue experts and others. He said he's never seen a collapse like this one.

"This building collapsed very, very badly, if I can use this word, because it collapsed into itself," he said. "And the bedrooms that we are looking for, because the people (slept) in the bedrooms, are under 4 or 5 meters (13 to 16 feet) of concrete."

At least 11 people have died in the partial collapse of the building Thursday, and 150 remain unaccounted for, officials have said. Those confirmed to have died ranged in age from 26 to 82.

"It's hard to stay composed," Shelly Angle, whose friend Elaine Sabino lived on the building's top floor and has not been found, told CNN on Tuesday. Angle said she is holding onto "the glimmer of hope that just maybe somebody survived."

Rescuers will continue to consider the unaccounted-for as "missing until they are found," Gov. Ron DeSantis said in a news conference late Tuesday morning.

"Nobody is giving up hope here. Nobody is stopping," Surfiside Mayor Charles Burkett said at the same news conference.

Still, officials acknowledged that conditions at the site are challenging for emergency workers. Burkett told CNN's John Berman earlier on Tuesday that debris had fallen overnight Monday into Tuesday from portions of the building that remain standing.

Additionally, workers are steering clear of a "45-foot area next to the building" because of concerns about overhanging debris from the standing portion, Miami-Dade Fire Chief Alan Cominsky said Tuesday.

More than 3 million pounds of concrete have been removed during the rescue operation, Cominsky said.

A six-person team of federal officials from the National Institute of Standards and Technology -- consisting of scientists, structural engineers and a geotechnical engineer -- is conducting a preliminary investigation of the collapsed building's materials, history and applicable building codes at the time the condo was built, the ground surrounding the building and numerous other factors, according to an agency official.

The White House announced President Joe Biden planned to be in Surfside on Thursday to visit with victims' families and first responders.

As investigators converge on the scene, questions are being asked about the building's structural integrity.

An April 2021 letter from the condo's board president to residents said some damage observed in a 2018 engineer's report, including in the garage, "has gotten significantly worse."

"The concrete deterioration is accelerating. The roof situation got much worse, so extensive roof repairs had to be incorporated," the letter from board President Jean Wodnicki reads.

Wodnicki further described issues facing the building: "When you can visually see the concrete spalling (cracking), that means that the rebar holding it together is rusting and deteriorating beneath the surface."

CNN has reached out to representatives of the condominium association for further comment.

The 2018 report from an engineering firm documented severe structural damage to the concrete slab below the pool deck and "cracking and spalling" located in the parking garage. Spalling is a term used to describe areas of concrete that have cracked or crumbled.

The 2021 letter sought to explain a $15 million assessment that condo owners were to pay for repairs to the building, with payments set to begin July 1. The association approved the assessment in April to complete repairs required under the county's 40-year recertification process, according to documents obtained by CNN.

Building residents also had raised concerns over tremors during construction of a nearby building in 2019, according to documents obtained by CNN and interviews with the family members of people missing in the collapse.

The 2018 report didn't say whether the structure was at risk of collapse. Donna DiMaggio Berger, an attorney for the condominium board, told CNN's Chris Cuomo on Monday that she didn't think the building was in a state of disrepair prior to its collapse.

While there are no clear answers on the cause, early signs point to some failure in the lower reaches of the 13-story building, perhaps in its foundation, columns or underground parking garage, experts have told CNN.

The lawsuit was filed on Monday on behalf of Raysa Rodriguez, a resident who lives on the ninth floor of the building, as well as other residents.

The suit states the condominium association had the duty to maintain the building in a safe condition and good working order.

"Despite the obvious duties required by Florida law, and this admitted duty of care by the Association's Declaration and other governing documents, Defendant, through their own reckless and negligent conduct, caused a catastrophic deadly collapse of Champlain Towers South in Surfside," the complaint alleges.

In filing the complaint, Rodriguez is seeking class action status to represent all of the people who were affected by the tragedy, and is asking the court to help preserve any materials so everyone who is to blame can be held responsible.

CNN's calls to the Champlain Towers South Condominium Association seeking comment on the lawsuit have not been returned.

Because of the collapse, a building audit is underway across the county, and that audit has already uncovered serious issues, said Mayor Daniella Levine Cava.

"Just last night, our building officer notified one of those properties, a building in northeast Dade, that four balconies must be immediately closed to residents due to safety conditions," Levine Cava said at Tuesday morning's news conference.

"We're taking swift action to immediately identify and address any outstanding issues with the buildings that have not yet completed their 40-year certification process -- that's our priority right now," she said.

Levine Cava says she expects all issues the audit turns up will be addressed in a matter of weeks.

Families and friends are waiting for answers

Family members of those still unaccounted for are waiting for any answers they can get as the search continues.

Rachel Spiegel, whose mother Judy Spiegel is unaccounted for, said it's been difficult to relay to Rachel's 4-year-old daughter what has been happening. Rachel told her daughter that there was an accident in the building, and that "grandma is missing."

"And she told me, 'I can go get her. ... I know where she hides. I'm really good at finding her,'" Rachel Spiegel told CNN on Tuesday morning. "When she's telling me that, I'm ... crying even more, but at the same time trying to keep my composure because I don't want my 4-year-old to worry too much."

"I hope my mom is alive ... but we also are very aware of the reality of the situation and the time -- I mean, it's Day 6. And the fact that they aren't finding people is of tremendous concern," Rachel Spiegel said.

Ronit Felszer and Carlos Naibryf told CNN's Alisyn Camerota on Monday that they are being realistic about the possible outcome.

Carlos Naibryf said his son, Ilan Naibryf, "was a 21-year-old young adult. Bright. Everywhere he went, he made an impact ... now he's at U. Chicago, physics major."

When Camerota asked the parents if they're sill believing in a miracle, Felszer shook her head. "We want to believe in a miracle because we still don't have the physical presence, in part or in whole, of our son," she said.

"A miracle can come, yes, but we have to be very realistic," the father told CNN.