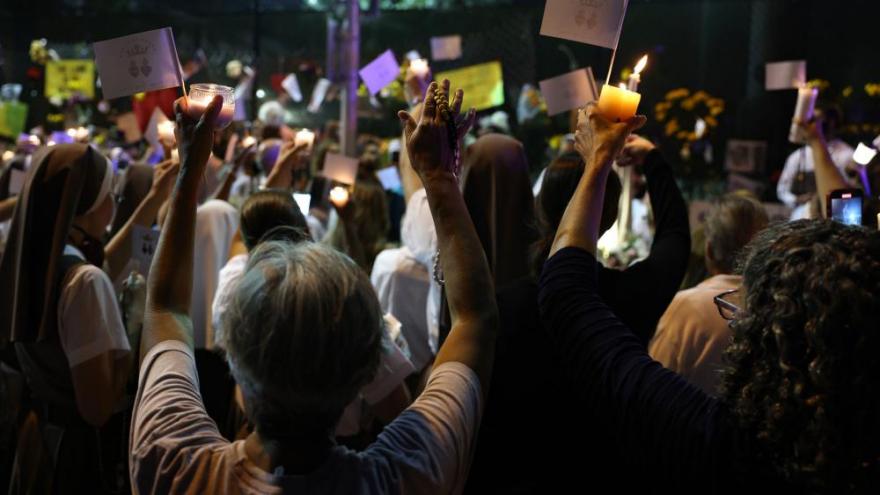 People lift their hands during a prayer at the memorial site for victims of the collapsed condo building.

(CNN) -- The death toll in a condo building collapse in Surfside, Florida, has risen to 64, Miami-Dade County Mayor Daniella Levine Cava said, after authorities made the decision to shift the search effort from rescue to recovery.

Seventy-six people are "potentially unaccounted for," the mayor said at a news conference Thursday afternoon, two weeks after the Champlain Towers South condo building collapse, which is among the deadliest mass casualty building collapses in US history, not including acts of terror or fires.

A total of 200 people have been accounted for, 40 have been identified, and of those, 39 families have been notified, Levine Cava said.

Authorities transitioned to search and recovery at midnight overnight, after determining "the viability of life in the rubble" was low, Miami-Dade County Fire Chief Alan Cominsky said Wednesday.

Still, Levine Cava said the recovery effort is "proceeding just as rapidly with just as many people on the pile," and authorities are "taking as much care as ever" to find victims.

The National Institute of Standards and Technology (NIST) has been scanning the collapse site twice a day and "flying drones to collect essential imaging that will support the fact-finding process," Levine Cava said. So far, NIST has tagged 182 specimens.

Levine Cava told CNN's Wolf Blitzer that victim families have been meeting with NIST and other experts and understand the need to transition from rescue to recovery.

"They understood there was no more hope or possibility of finding someone alive," she said. "So they are just now waiting for closure, they're waiting to have a chance to find the victims and put this to rest."

Surfside Mayor Charles Burkett said that a representative from the fire department told the families "the Miami-Dade Fire Department will not stop working until they've gotten to the bottom of the pile and recovered every single one of the family's missing loved ones."

"The speaker further said that 'I can assure you, we are not stopping. And your missing children are coming back to your family,'" Burkett said.

How to help Surfside victims

A moment of silence

Search and recovery teams paused work around 1:20 a.m. to honor the victims, the mayor said.

At the edge of the rubble, first responders, officials, faith leaders and journalists bowed their heads for a moment of silence Wednesday evening, honoring those who lost their lives under the debris.

The scene was largely monochromatic: gray concrete, gray dry wall, gray rebar and gray dust still on the paws of a search dog who stood at attention for the moment of silence.

But color could be found just around the corner, where a makeshift shrine adorned the fence of a tennis court with flowers, photos and a sign that read, "Miami-Dade Search and Rescue mourns with you."

Faith leaders offered prayers, and at one point an impromptu religious procession unfolded as sisters in brown robes lit candles and marched with a priest holding a statue of Our Lady of Fatima.

Some of the families who lost loved ones were brought to the site Thursday for a visit at their request, Levine Cava said.

"We held a moment of silence with our first responders. They paused their work on the pile briefly to honor the victims and their families and they received an aerial salute by Miami-Dade County Police Department," the mayor said.

Each victim recovered is "handled with extreme care and compassion," Levine Cava said in Thursday's news conference. Faith leaders, including rabbis, have been embedded with search and recovery workers and they're working with police to handle the remains of Jewish victims in a way that's consistent with their faith, she said.

"We have a tent designated on-site and when a Jewish body is discovered, a prayer is performed and specific protocols are followed to honor both the faith traditions and the integrity of the investigation," Levine Cava said.

Authorities are also collecting all manner of personal items, like legal or identifying documents, photos, wallets and credit cards, cell phone and tablets. Any currency, firearms and safes are also being set aside.

The way the building collapsed gave people inside the lowest probability of survival, Miami-Dade Fire Rescue Assistant Fire Chief of Operations Raide Jadallah said Wednesday, referring to it as a "pancake."

"The other factors that we have to include, you know, the fact that we did not get in the alert (from) a K-9, a sensor trip forward, sound, and any visual utilizing our cameras. The last known alert that we received was in the initial hours the day of the collapse," Jadallah said.

Condo associations in Surfside will soon receive letters signed by the town mayor advising them to take steps to give residents confidence their buildings are safe.

The Town of Surfside shared a copy of the letter with CNN. It provides recommendations for all buildings east of Collins Avenue, regardless of the age of the building, including retaining a structural engineer to review structural drawings and perform a basement review, as well as a geotechnical engineer to review the foundation.

City and county officials have launched audits and inspections of residential condo buildings in the surrounding areas, and so far, three have generated concern.

One in Miami-Dade County had an issue with four balconies. Another in Miami Beach required the evacuation of a three-story building.

The largest impact has been in North Miami Beach, where all 156 units of Crestview Towers south were evacuated Friday after officials there said the building was deemed structurally and electrically unsafe. According to an inspection report by Miami-Dade Fire Rescue, the building, built in 1972, has 18 pending code violations, various fines and liens.

Eyes are also on the collapsed structure's sister building, Champlain Towers North, which Burkett has previously described as "substantially the same" as Chaplain Towers South, with "the same construction, the same developer, the same name, probably the same materials."

On Thursday, Burkett told reporters that experts are collecting samples of concrete from Champlain Towers North to look for potential salt contamination, "which can significantly compromise the structure."

Report of damage in the garage emerges

Approximately 55 of the building's 136 units collapsed early June 24, leaving many officials and residents asking: What caused the collapse and did the building association do enough to prevent it from happening?

The top prosecutor in Miami-Dade County said Wednesday she has formally tasked a grand jury with investigating the cause of the collapse.

In a statement, State Attorney Katherine Fernandez Rundle said she also asked the grand jury to "look into how we can prevent such a disaster from occurring again, not just in Surfside, and not just in condominiums, but in all buildings and structures in the coastal, intercoastal and surrounding areas of our county, state and nation."

Grand juries are groups of residents who typically have subpoena power and work in secret with local prosecutors to investigate issues. In Florida, they can produce a report on a topic that does not necessarily pair with criminal charges.

Reports of damage to the building, cracks in the concrete and disputes over repair work have surfaced in the weeks since the collapse. And while they have prompted speculation about a potential cause, officials have said they have not identified a single trigger for the collapse.

A new detail emerged Wednesday via a police report released by the town of Surfside to CNN, which disclosed a car crash in the basement garage in 2016 caused visible damage to a cement pole.

The driver of a BMW sedan said he "accidentally hit the accelerator instead of the brake" before crashing into a second car and then the pole, according to the report filed just after the crash.

A crash in the garage has been among the theories floated by engineers reviewing the collapse as a possible contributing factor, and the 2016 accident, which has not been previously reported, would likely be another piece of evidence considered by investigators. But engineers who spoke to CNN cautioned it could be insignificant, especially considering when it took place.

"I would think that if the vehicle impacting the column was a factor, that you would usually find that within close proximity to the time of the accident," said Richard Slider, a structural engineer who consults on building construction.

CNN has reached out to a spokesman for the building's condominium board for comment and the town for more information.