Deaf dog rescued after falling down California ravine, family calls it a 'miracle' 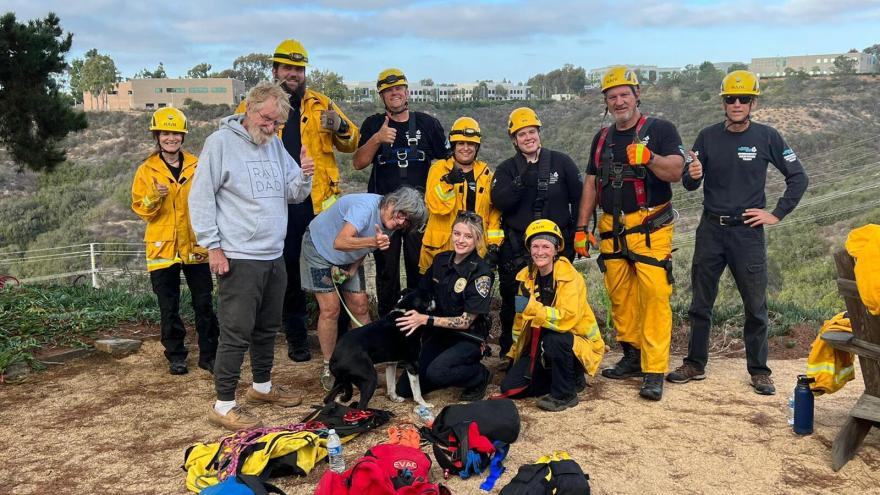 A California family says they're thrilled after their deaf dog was rescued by emergency responders after falling 100 feet down a ravine.

(CNN) -- A California family says they're thrilled after their deaf dog was rescued by emergency responders after falling 100 feet down a ravine.

"It was a miracle," Julia Plant told CNN affiliate KGTV, after Hobo, an 8-year-old Australian shepherd, was rescued.

Plant was walking Hobo near their Sorrento Valley home when he darted after something in the ravine, lost his footing and tumbled into the brush far below, Plant told KGTV.

Members of the San Diego Humane Society's Emergency Response Team rushed to the scene, where they realized they would need to rappel down the ravine to reach the dog, according to their Facebook post.

Lt. Clint Ganus of the rescue team told CNN that the rescue was especially complicated because Hobo landed in some "really thick brush" that was difficult even for humans to navigate. And Hobo had arthritis and other mobility issues that made it difficult for him to move.

"When my rescuers got on scene, we built the systems to go down and rescue the dog," Ganus explained, eventually cutting away trees and branches to free Hobo from the foliage. Finally, they put him in a safety harness and pulled him up to the top, where his family was waiting.

Hobo was "all wiggles," when he was finally free, Ganus said. "All my team members had big smiles on their faces. Seeing that reminds me, you know, why I come back and do what I do every single day."

Hobo's family says they're very grateful. "Thank God for the Humane Society," Plant told KGTV and added that hopefully, Hobo won't go near the ravine again. "I'm going to keep him on this very short lead."