DEA suspends agent for standing outside the Capitol during the insurrection 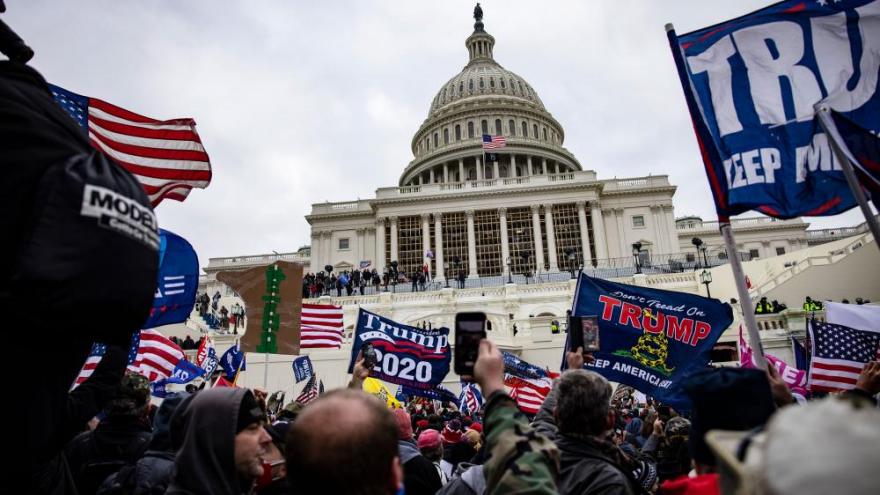 Pro-Trump supporters storm the U.S. Capitol following a rally with President Donald Trump on January 6 in Washington, DC. A US DEA agent was suspended this week for his participation in the US Capitol riot, though he insists he never went inside the building.

(CNN) -- A US Drug Enforcement Administration agent was suspended this week for his participation in the US Capitol riot, though he insists he never went inside the building, his lawyer said Thursday.

Mark Ibrahim was left "perplexed and damaged" when the DEA took an "adverse employment action" for participating in the rally and marching to the Capitol as hundreds of pro-Trump rioters and extremist group members stormed the building, his lawyer Darren Richie said in a statement.

Richie said that the agent was "put on leave and his security clearance was suspended ... because of his presence on January 6th." Reuters was the first to report the suspension.

Ibrahim was off duty with his family behind the barricades to enjoy "an important day in history" as then-President Donald Trump spoke and participated in a "peaceful march to the Capitol," Richie said.

"Mr. Ibrahim was not part of, affiliated with nor participatory in any trespass or violent acts and vehemently denounces them. Those participants comprised only a fraction of the total attendees," Richie wrote.

Ibrahim has not been charged for his participation, according to the federal court records database.

The government has charged nearly 300 others in connection to the January 6 insurrection that left dozens injured and five people, including US Capitol Police Officer Brian Sicknick, dead. The rioters were attempting to stop the Senate from counting the electoral votes to confirm Joe Biden's presidential win.

When Ibrahim realized the crowd was "violating laws he swung into action in his capacity as a law enforcement officer to capture video which likely led to arrests in support of law and order," Richie said.

"DEA cannot comment on specific personnel matters. If we receive information indicating an employee engaged in misconduct, DEA's policy is to promptly refer the case to the appropriate authorities to review," a DEA official said in a statement.

The DC US Attorney's Office and the Justice Department's Office of Inspector General both declined to comment.

Richie said Ibrahim is "left perplexed and damaged ... knowing how easily and quickly the DEA compromised" his pride as a member of the agency "that professes support for this nation and its security."