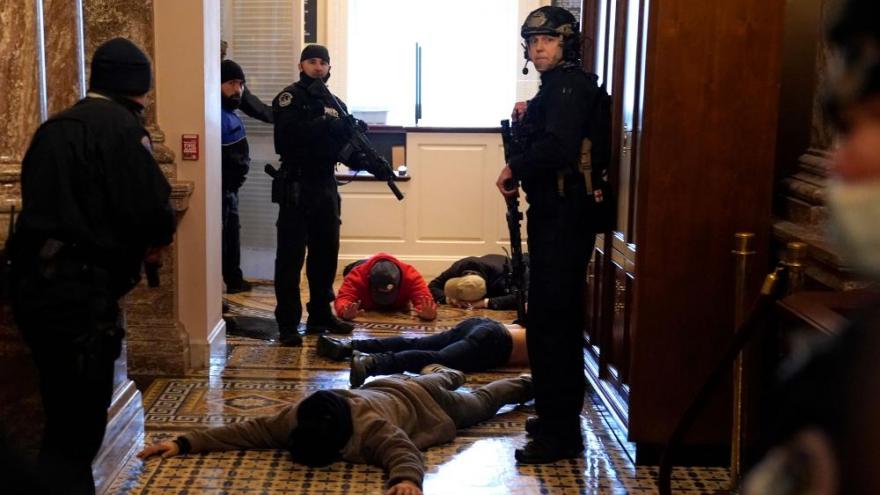 US Capitol Police detain rioters outside of the House Chamber during a joint session of Congress on January 6, 2021.

When a mob of President Trump's supporters broke into the US Capitol on Wednesday, they were confronted by a far smaller police presence -- and by the end of the day, far fewer of the rioters ended up in custody.

DC police arrested more than five times as many people at the height of the Black Lives Matter protests last summer than they did during the day of insurrection at the Capitol, according to a CNN analysis of Metropolitan Police Department (MPD) data. And many of those arrested amid this week's unrest were detained on less serious charges.

The stark disparity in arrests came even though more DC officers were injured during the Capitol mayhem, which left five people dead, including a police officer.

The District's police made 61 "unrest-related" arrests on Wednesday, compared with 316 on June 1, when protesters and rioters filled city streets a week after Minneapolis police killed George Floyd. That was the same day as Trump's infamous Bible-holding photo op, when law enforcement officers dispersed mostly peaceful protesters with tear gas.

Even including 14 additional people who were arrested by the US Capitol Police, a separate agency, the number of people both agencies arrested amid Wednesday's tumult was less than a fourth of those detained by city officers alone on June 1.

Activists in DC said they were shocked that a deadly assault on the heart of American democracy led to far fewer people in police custody than the clashes that erupted during protests over law enforcement brutality.

"It's so, so insulting to racial justice activists that have been bringing attention to Black lives that have been lost," said Anthony Lorenzo Green, one of the activists leading the Black Lives Matter DC group. "The way they chose to secure the Capitol was to let everybody go -- they let these people back on our streets."

Then-Attorney General William Barr has said that including federal troops and agents sent to the city, about 150 law enforcement personnel suffered injuries in DC over a multi-day period during the protests.

The Capitol attack was also deadlier than the summer protests: Brian Sicknick, a Capitol Police officer, died Thursday night "due to injuries sustained while on-duty" as he was "physically engaging with protesters,"according to his department. Sicknick's death has prompted a federal murder investigation. Four other people also died Wednesday, including a woman shot by another Capitol officer and three others who suffered what authorities described as "medical emergencies."

No law enforcement officers died in DC while responding to the protests and riots over the summer.

Of course, the protests during the summer and the Capitol insurrection this week were very different events -- for example, there were likely far more protesters spread out over a wider area of the city last summer than there were on Wednesday.

Kristen Metzger, an MPD spokeswoman, said the department didn't make more arrests Wednesday in part because, unlike during the summer protests, the city's curfew wasn't announced in advance of the incident.

Metzger also noted that the Capitol is the jurisdiction of the US Capitol Police and that the district's police were only called for assistance after demonstrators breached the building's security.

"At that point, it was just controlling the situation and getting them out of the Capitol building," she said.

But Monica Hopkins, the executive director of the ACLU of DC, said she couldn't believe the department wasn't more prepared -- especially because pro-Trump figures had been openly planning their riot for weeks, and the MPD had just arrested a leader of the far-right Proud Boys group in DC days before the Capitol insurrection.

"We are a city that deals with mass demonstrations all the time," Hopkins said. "For any law enforcement agency in this city to say they were caught flat-footed or they didn't know what was coming is just incredibly false."

Capitol Police spokespeople did not respond to a request for comment, but said in a statement that the attack on the building was unprecedented and that the agency would review its security planning. Steven Sund, the department's chief, announced Thursday that he would resign next week.

There will likely be additional arrests connected with the Capitol intrusion. Michael Sherwin, the acting US Attorney for DC, said Thursday that federal officials plan to review social media footage from the bedlam and arrest people they identify. Federal prosecutors have already charged 15 people, Sherwin said.

So far, at least, there are also notable disparities in the seriousness of charges facing the Capitol arrestees and those arrested during the summer protests.

Most of the people arrested Wednesday were held on misdemeanor curfew violations or unlawful entry charges. DC police arrested only one person on a charge they specifically listed as a felony: a 39-year-old man accused of rioting and unlawful entry at the Capitol. His arrest doesn't necessarily represent all felony arrests made Wednesday, since DC police did not always include this information in its data. It's possible that more people could face felony charges as prosecutors move forward with their cases.

At least 29 people were arrested on felony charges on June 1, most of whom faced burglary and rioting charges, the MPD data showed. On another night of Black Lives Matter protests — August 14, when demonstrators chanted the names of people killed by the local police department before clashing with officers — police arrested at least 37 people on felony rioting charges.

DC Mayor Muriel Bowser's office did not respond to requests for comment about the disparity in arrests and the charges. Bowser has criticized the federal response to the insurrection, noting at a press conference Wednesday that "we saw a different posture used" by federal officials as compared to the highly militarized response to the summer protests.

While many of the demonstrators who filled the streets during protests over the death of George Floyd were peaceful, there was also rioting and looting in the city over several days in late May and early June. Sporadic protests continued throughout the rest of the year — there were five other days later in 2020 when DC police made more than two dozen unrest-related arrests. Some of the arrests from December appear to be tied to another pro-Trump rally.

President-elect Joe Biden focused on the racial disparities in a speech Thursday, saying "no one can tell me that if that had been a group of Black Lives Matter protesting yesterday, they wouldn't have been treated very, very differently than the mob of thugs that stormed the Capitol."

The data released by the police department also shows that the people arrested during the Black Lives Matter protests were more local than those arrested this week, most of whom flocked to the capital from elsewhere around the country.

Hopkins, the ACLU executive, said that the disparity between the treatment of "White supremacists coming to our city" and Black protesters was a textbook example of the disparities in policing.

The events show that police reformers should be paying attention to "not only what police do," she said, but also "when officers choose to do something and when they choose to do nothing."