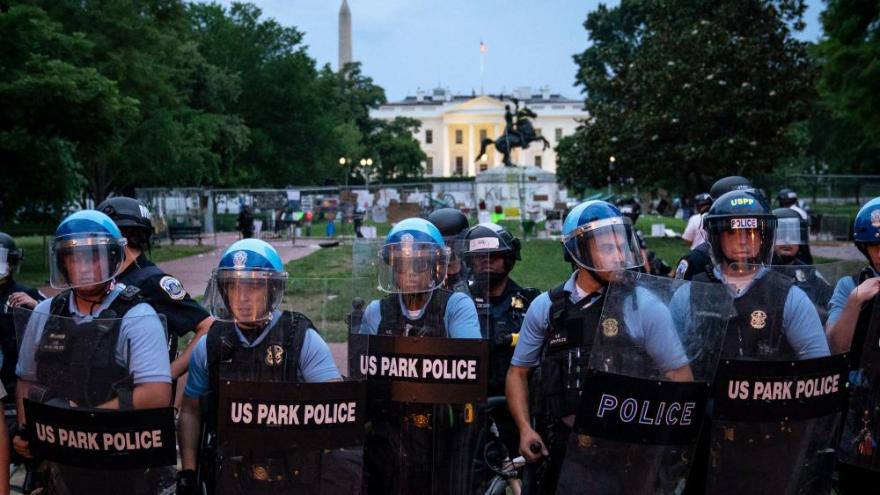 "The District of Columbia National Guard is responding to a request to support law enforcement officials and has dispatched unarmed personnel, with others on stand-by, National Guard spokesman Major Robert Perino said in a statement to CNN. "Activated Guardsmen are expected to provide security for local monuments and critical infrastructure."

A defense official says Army Secretary Ryan McCarthy signed the memo Tuesday authorizing the activation of the DC National Guard forces, after the National Park Police made a request for the assistance.

The official strongly emphasized that no Guard forces have yet been sent onto the streets and so far have all stayed inside their barracks. There are currently about 100 troops in the immediate Washington, DC, area. The activation could grow to 400 in total to rotate troops if needed. The Pentagon expects the guard forces to be used as a stopgap measure until the Justice Department can muster additional federal law enforcement personnel to take over the mission, the defense official said. Nonetheless it is expected the guard units will remain in the DC area through July 4th.

Speaking to reporters Tuesday morning, President Donald Trump said he would sign an executive order punishing those who damage monuments to US veterans, though he acknowledged that federal law already allows up to 10 years prison time for offenses.

On Tuesday, Secretary of the Interior David Bernhardt appearing on Fox News said he asked DOD to make National Guard "available" to them if needed to protect monuments.

On Tuesday, law enforcement cleared streets at the Black Lives Matter Plaza in Washington, DC, removing several tents near the White House in which protesters were encamped leading to a tense confrontation between police and demonstrators.

The Trump administration has been criticized over the use of police tactics during protests against police brutality and after peaceful protesters were forcibly cleared from Lafayette Park earlier this month. CNN reported Tuesday that Defense Secretary Mark Esper and other Pentagon officials are concerned about the militarized appearance of police and other civilian law enforcement officers responding to protests.

Earlier this month, roughly 5,000 National Guard troops were called up to patrol the city amid the protests before being withdrawn. 1600 active duty troops were also moved to the region but were not deployed before being removed.

After those deployments, DC Mayor Muriel Bowser sent a letter to Trump and other administration officials requesting the withdrawal of federal law enforcement and military personnel from the city.

Attorney General William Barr responded to Bowser in a letter, saying the presence of National Guard troops and military personnel were necessary because unrest in the city reached unprecedented and dangerous levels.