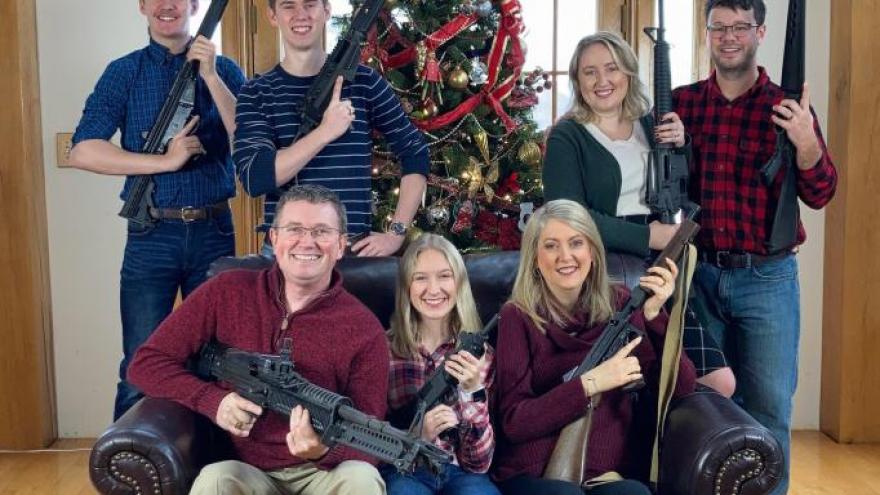 Rep. Thomas Massie tweeted a photo of him and his family holding guns in front of a Christmas tree, just days after four teenagers were killed in a school shooting in Michigan.

(CNN) -- US Rep. Thomas Massie is drawing criticism after tweeting a photo of him and his family holding guns in front of a Christmas tree, just days after four teenagers were killed in a school shooting in Michigan.

"Merry Christmas!, ps. Santa, please bring ammo," read the Saturday tweet by the Republican representative from Kentucky, which showed everyone in the photo holding various types of guns.

The reaction of parents who have lost children in school shootings was swift.

"@RepThomasMassie, since we are sharing family photos, here are mine," tweeted Fred Guttenberg, whose daughter Jaime was one of 17 people who died in the 2018 shooting at a high school in Parkland, Florida. "One is the last photo that I ever took of Jaime, the other is where she is buried because of the Parkland school shooting."

"This is also something that should teach us who should we elect and not," Oliver said. "It's a very nasty post."

CNN has reached out to Massie and a spokesperson for the representative for comment but has not yet received a response.

On Tuesday, four students were killed in a shooting at Oxford High School in Michigan, and seven people were wounded. A 15-year-old boy is accused of the shooting and faces murder, terrorism and other charges, and his parents face four counts of involuntary manslaughter in connection with the shooting.

The attack was the deadliest US school shooting since eight students and two teachers were slain in May 2018 at Texas' Santa Fe High School, according to a CNN tally. There have been 48 shootings this year on K-12 campuses, 32 of them since August 1.