Day of the Dead has everything to do with the afterlife, love and those colorful skulls you've seen around 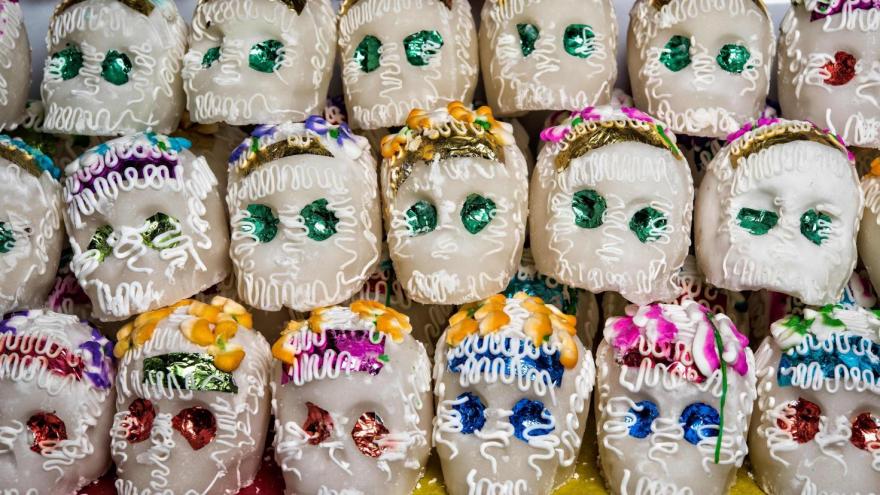 Skulls made and decorated with sugar decorate altars and are given as gifts for Día de los Muertos.

(CNN) -- Families are spreading bulks of marigold petals, lighting up candles for their loved ones and some are even wearing colorful skull makeup.

The Mexican holiday, also known as Day of the Dead, extends over the first two days of November and has nothing to do with Halloween. It's an ode to the afterlife and a reminder that death is nothing to be afraid of.

If you enjoyed Disney's animated film "Coco," here are the many ways people celebrate the Día de los Muertos holiday.

Skulls were a powerful symbol in the Aztec culture, and some were used as tribute to Mictecacihuatl, the goddess of death. To celebrate the holiday, artisans spend hours turning sugar, hot water and lime into a sugar paste similar to caramel that they mold into skull-shaped treats of all sizes.

These treats are then decorated with icing, multi-colored foil and sometimes feathers. Calaveritas are for the most part edible, but people mainly use them to decorate their altars.

The colorful multi-level memorials are built in homes, schools and public places as a tribute to deceased loved ones. The different levels represent the underworld, Earth and heaven.

A large photo of the deceased is usually placed at the very top of the altar with papel picado. Sugar skulls, candles, pan de muerto (dead man's bread) and Mexican marigolds are featured throughout the altar.

The pungent scent and bright color of fresh marigold petals are meant to guide the spirits to their altars, and glasses of water are handy to quench the thirst of the dead after their long journey.

The ofrendas (offerings), as the altars are called, are carefully assembled using many traditional elements, but each of them is unique on its own. They can be personalized with the dead person's favorite food, mementos from their lives and their favorite items. Some altars have books, jewelry, music and clothes on display.

People flock to cemeteries through the holiday to visit the graves of dead relatives and friends. But they are not mourning or empty-handed.

After cleaning the graves and headstones, some decorate with flowers, marigold petals and light up candles. While some come to pray in silence, others serenade their lost loved ones with mariachis.

People make their way to the gravesites every year to keep the memory of the deceased alive in their hearts and in the minds of their family members. They share stories, drink and eat together as if it were a party.

Skeletons walk among the living

People parade the streets with beautiful skulls painted on their faces and wearing costumes to commemorate Día de los Muertos.

Women usually paint their faces, wear elegant dresses and hats adorned with feathers and flowers. They are actually evoking "La Catrina," a rich skeleton lady in a fancy floral hat. The image, sketched by Mexican artist José Guadalupe Posada in 1910, was political satire that mocked Mexico's upper-class and their negative attitude toward indigenous people.

Crowds dance in cheerful parades held during the day in numerous cities, or parade together on their way to cemeteries the night of Halloween.