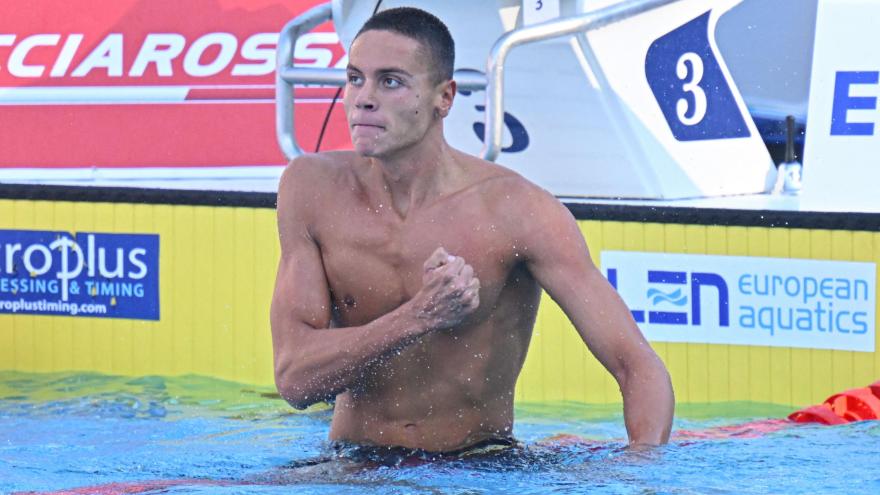 (CNN) -- Romanian teenager David Popovici set a world record in the 100-meter freestyle with a time of 46.86 seconds at the European championships in Rome on Saturday.

The 17-year-old broke the previous record, set by Brazilian Cesar Cielo in 2009, by 0.05 seconds as he took gold ahead of Hungary's Kristof Milak and Italy's Alessandro Miressi.

"I wanted to go as fast as possible and it looks like I did it," he told the BBC, calling himself a "skinny legend."

"A fantasy now might be a 45 (second time)," he added. "Adam Peaty is a pioneer in terms of the goals he set. For others it was science fiction, but not for him."

British swimmer Peaty set himself the benchmark of becoming the first man to swim the 100m breaststroke in under 57 seconds during his career -- a feat he achieved when he broke his own record in 2019.

The prospect of a new 100m freestyle record looked likely when Popovici broke the 47-second barrier for the first time in the semifinals on Friday. After his record-breaking swim the following day, he was congratulated by Cielo.

"I knew this day was coming... And it did! My 100m freestyle world record was broken after 13 years!" Cielo wrote on Twitter.

"Congratulations, Popovici! Glad to have had this huge record for so long!

"There is the new fastest man in the world in the 100 meters freestyle and he is just getting started!"