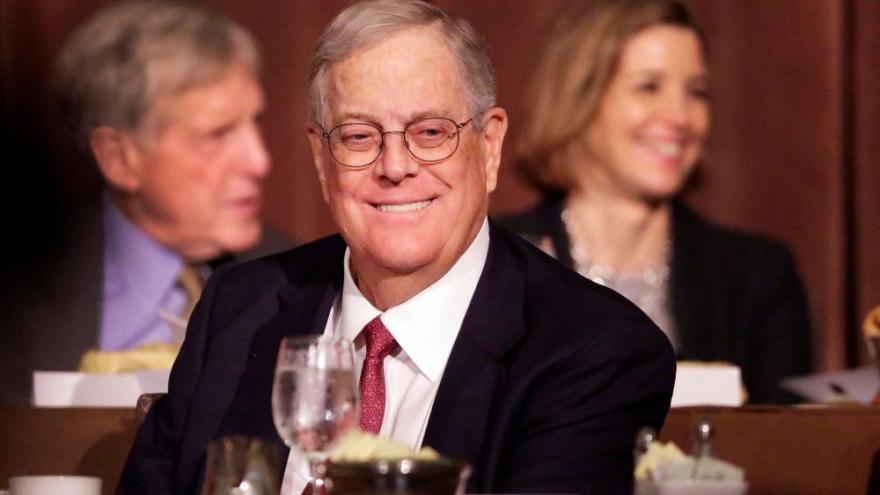 (CNN) -- Conservative billionaire David Koch, who became a household name through the policy and political empire he created with his older brother, Charles, has died. He was 79.

"It is with a heavy heart that I announce the passing of my brother David. Anyone who worked with David surely experienced his giant personality and passion for life," the elder Koch said in a statement. The statement did not cite a cause of death but noted David Koch's decades-old battle with prostate cancer. He is survived by his wife Julia and their three children.

Koch retired from the company and the Koch political operations in 2018, citing health reasons. Sources close to the family told CNN he had been in declining health in recent weeks.

The Koch brothers were best known -- and vilified by Democrats -- for their role in politics, and they used their vast wealth to build a sprawling array of think tanks, foundations and political groups to spread their small-government, free-market message. In some elections, the Koch network rivaled the spending and scope of the national Republican Party, and analysts view their activism as helping to have fueled the Tea Party movement.

Koch's death is not expected to bring major changes to the network founded by Charles Koch and now overseen on a day-to-day basis by his top lieutenant Brian Hooks.

The organization already was in midst of transformation when David Koch stepped away from his formal roles. The Koch groups now are called Stand Together and have made more investments in philanthropy and policy issues, such as K-12 education.

David Koch was most active in Americans for Prosperity, the grassroots arm of the Koch's sprawling network, which built a coalition of more than 3 million activists to push the agenda of the Kochs and the roughly 700 like-minded donors to help fund their public policy work.

But in the era of President Donald Trump -- whom Charles Koch pointedly declined to support in 2016 -- the network has undergone a significant shift in focus, upping its commitment to work across party lines on top priorities, such as promoting free trade and creating a path to permanent legal status for undocumented immigrants brought to the US as young children.

In June, Americans for Prosperity announced four new political action committees and said it would wade into primaries to help incumbent politicians, including Democrats, who side with Koch on trade, immigration and other issues.

David Koch himself entered politics decades ago, waging an unsuccessful bid as the Libertarian Party's vice presidential nominee in 1980 with Ed Clark. They won just 1% of the vote.

The Koch network has spread a hardline, limited-government message that has helped move the GOP to the right in recent years, as they bankrolled efforts to elect conservatives to Congress and statehouses around the country.

David Koch, instantly recognizable in any crowd at 6-feet-5-inches, was the more affable and public face of the duo, while Charles Koch, who still lives in the compound where they were raised in Wichita, was the driving force behind the company and the brothers' political activism.

"I think (David Koch) would like to be seen as a philanthropist in the traditional sense," said Daniel Schulman, the author of the 2014 book about the brothers' rise, "Sons of Wichita: How the Koch Brothers Became America's Most Powerful and Private Dynasty."

"But his legacy is intertwined with his very robust role in politics and the political culture," he added. The brothers' work to boost the Tea Party wave in the 2010 election "is a precursor to the politically fractious era we are living in," Schulman said.

Their activism made them villains to Democrats; then-Senate Majority Leader Harry Reid, a Nevada Democrat, once denounced them as "power-drunk billionaires" out "to buy the country." But it also put them at odds with Trump, who called them a "total joke" last year after Charles Koch and his top lieutenants publicly criticized the administration's trade policies.

Even so, the Kochs have close ties to key figures in the administration, including Vice President Mike Pence and Secretary of State Mike Pompeo, who represented Wichita in the US House.

One of the world's richest men

David Koch was born on May 3, 1940 to Fred Koch -- an ultra-conservative businessman who was a founding member of the John Birch Society -- and Mary Koch.

David was one of four Koch brothers: Frederick, the oldest; Charles; and William, David's fraternal twin.

Charles, who was groomed at a young age to take over the family's oil business, and David prevailed in a years-long feud with Frederick and William to retain control of a company that would become one of the country's largest industrial empires.

The two brothers largely made their fortune through Koch Industries, an industrial conglomerate and one of the world's largest private companies, the company is engaged in everything from oil refining to making consumer products such as Brawny paper towels. In March, Forbes listed both Koch brothers as the 11th wealthiest men in the world, with an estimated individual worth of $50.5 billion.

As philanthropists, the brothers' mission expanded to include large donations to colleges and universities as well as advocating for criminal justice reform. They also dedicated funds toward medical research and the arts.

David Koch, a well-known figure in New York, became a major benefactor of the Memorial Sloan Kettering Cancer Center and a patron to arts organizations. A dance-focused theater at Lincoln Center bears his name, courtesy of his $100 million pledge in 2008. Last year, Koch Industries said David Koch's donations and pledges to philanthropic organizations had topped $1.3 billion.

"Twenty-seven years ago, David was diagnosed with advanced prostate cancer and given a grim prognosis of a few years to live," Charles Koch said in Friday's statement. "David liked to say that a combination of brilliant doctors, state-of-the-art medications and his own stubbornness kept the cancer at bay. We can all be grateful that it did, because he was able to touch so many more lives as a result."