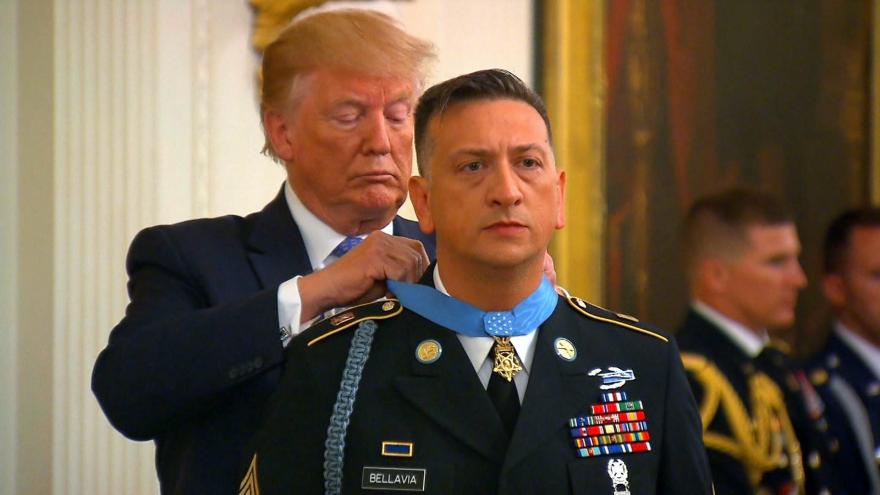 "David, today we honor your extraordinary courage. We salute your selfless service and we thank you for carrying on the legacy of American valor that has always made our blessed nation the strongest and mightiest anywhere in the world," the President said during an East Room ceremony at the White House.

Bellavia received the Medal of Honor, the nation's highest award for combat valor, for his actions on November 10, 2004, while serving as a squad leader in support of Operation Phantom Fury in Fallujah, Iraq.

Until Tuesday's ceremony, the Medal of Honor had only been awarded posthumously to service members who served during the Iraq War.

"I served with some of the greatest men I've ever met in my entire life," he told reporters after receiving the medal. "That whole night, Fallujah, the entire thing is impossible to think about unless you're talking about the men we lost, who we didn't bring home."

The Iraq veteran also defended his actions in the War on Terror.

"The Iraq war veteran has nothing to apologize for whatsoever. We served our country." Bellavia continued. "I'm proud to be an Iraq War veteran. I'm proud to stand with the men and women who served in Iraq and entire thing is -- I can't even comprehend it."

Specifically, Bellavia, who at the time was with A Company, 2nd Battalion, 2nd Infantry Regiment,1st Infantry Division, was clearing a block of houses when his platoon became pinned down by enemy fire.

"He entered the house where his squad was trapped, and engaged insurgents, providing cover fire so that he and his fellow soldiers could exit safely," according to his citation. "Then-Staff Sergeant Bellavia re-entered the house, armed with an M16, and assaulted insurgents who were firing rocket-propelled grenades."

"That remarkable day, then-Staff Sergeant Bellavia rescued an entire squad, cleared an insurgent strongpoint, and saved many members of his platoon from imminent threat," it said.