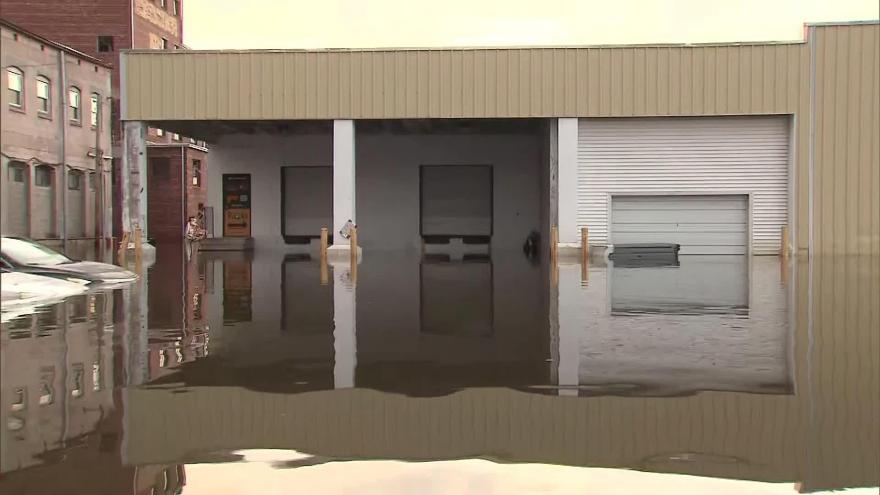 Buildings and cars are still submerged all around the Davenport area.

And now more inclement weather is on the way in the days ahead.

The flooding began last Tuesday when a temporary levee failed, sending water into Davenport buildings and flooding vehicles that had been left behind. Officials have said they are concerned that the flooding could weaken some buildings' foundations over time.

The Mississippi River at Rock Island, by Davenport, reached a record crest of 22.70 feet last Friday and has since dropped to a crest of 21.1 feet, according to the National Weather Service. Anything above 18 feet is considered to be major flood stage.

The height of the river is expected to go down over the coming days, despite the forecast of rain ahead. The Mississippi River initially reached that dangerous height due to a mix of rain and melting snow that caused all of the rivers in the system to crest at the same time.

There is a potential for more flooding at other cities southward along the Mississippi until the water flushes out into the Gulf of Mexico in several weeks, CNN meteorologist Chad Myers said.

Davenport, located in eastern Iowa along the Mississippi River, has a population of about 100,000 people and is the largest of the so-called "Quad Cities."

Davenport typically puts up a temporary barrier when the Mississippi River rises, but in this case, that barrier gave way and the water started pouring in.

Joe Gauthier told CNN affiliate WHBF last week he just happened to be looking out a window from his downtown loft Tuesday when the water started rushing into the streets.

"I saw people running, and I saw some water coming up the side of the street. So I just threw my shoes on, grabbed my keys, and got my car out of the lot -- otherwise the car would have been sunk underwater," he said.

This story has been updated to reflect the new record crest of the Mississippi at Rock Island, at 22.70 feet on May 2, 2019.