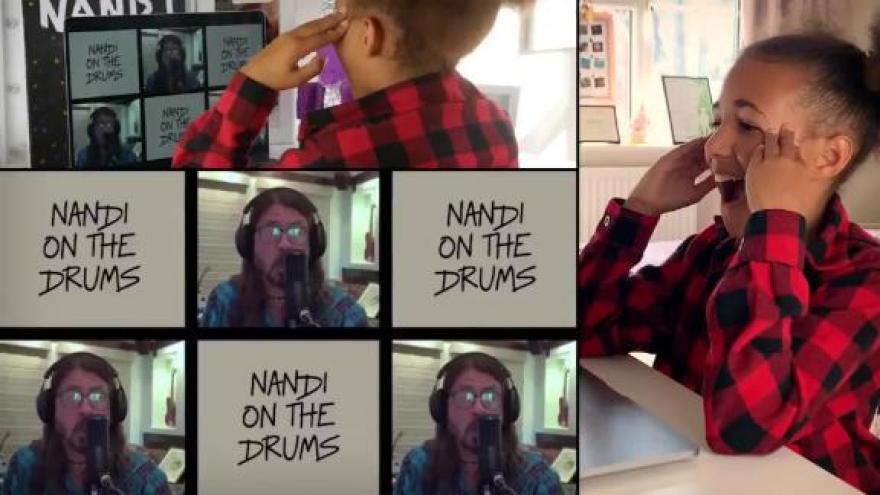 (CNN) -- Nandi Bushell can't embark on a world tour right now, hammering out impressive drum solos that belie her age. Pandemic aside, she's still in elementary school, and it's not very "rock'n'roll" to tour with your parents as chaperones and a backpack full of homework.

She can, though, embark on an internet friendship with Dave Grohl, the rock legend and Foo Fighters frontman who's inspired some of her gnarliest percussion performances.

The two, separated by decades of experience and one iconic "MTV Unplugged" performance, have repeatedly squared off (online) in an ongoing drum battle. This week, the Grammy Award-winning rocker wrote an original song about Nandi and her precocious talent.

Ten-year-old Nandi is a skilled drummer (and rocks out on guitar and keyboard, too). After performing several covers of Foo Fighters' hits on her YouTube channel, the petite percussionist from Ipswich, UK, challenged Grohl to a drumming duel in August.

Grohl, who's routinely ranked among the best drummers in rock, finally accepted the drum-off invite. Manning his daughter's drum set so they'd rock out on sets of the same size, Grohl jammed to the Fighters' classic "Everlong" (his first stab at drumming that song, he said, since he recorded it in 1997).

In response, he challenged her to play "Dead End Friends" by Them Crooked Vultures. Nandi, copying Grohl's red flannel and unhinged facial expressions, was more than up to the task.

Grohl, who has three daughters of his own, conceded the victory to young Nandi.

Grohl, accompanying himself on electric guitar, bass and drums, unleashed his original song, "Nandi," with his daughters on background vocals.

Of course, there's a drum solo sandwiched in between Grohl's effusive praise for the musical prodigy.

Nandi filmed herself listening to her eponymous song for the first time, a slack-jawed smile stuck to her face for all two minutes.

"He wrote a song about me!" she tells the camera in delight.

At the end of the video, she bounds out of her chair, excited to cover the song herself.