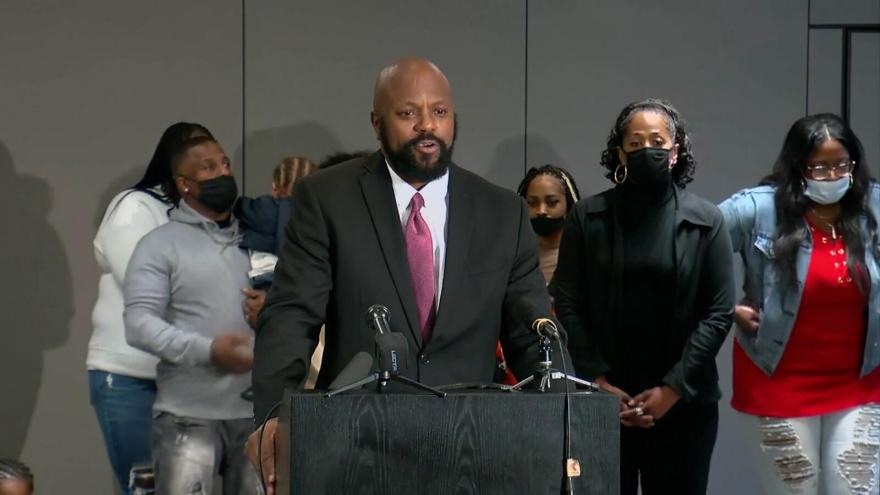 (CNN) -- Following the fatal police shooting of Daunte Wright in Brooklyn Center, Minnesota, his family has received death threats, an attorney for the mother of his child said Friday.

"There have been some threats to the family, which is disturbing," attorney Thomas Bowers said during a press conference Friday.

Bowers said he has received racist calls and emails and that some people have said they are happy Wright was killed.

Wright was stopped over what police said was an expired tag on April 11. During the stop, an officer drew her weapon and yelled "Taser!" as she fatally shot him.

The shooting took place ten miles from where the trial of former police officer Derek Chauvin -- accused of killing George Floyd -- was held in Minneapolis.

Wright's killing sparked nights of protests in Brooklyn Center and reignited conversations about policing and the use of force.

Floyd's family were among the mourners at Wright's funeral Thursday. And though there has been an overwhelming outpouring of support, Bowers said the family has been hurt by comments like one from a police association saying Wright would still be alive if he had complied.

"It's painful for a family to have to not only go through a funeral and see him there laying there lifeless," Bowers said. "It's even more painful to have to relive this every single day."

Chyna Whitaker, the mother of Daunte Wright Jr., read a letter to the father of her child during the press conference.

"Where did you go? Why did you leave?" she said. "My heart breaks for our son. He's only a year old and without his dad."

"When I look at his face it makes me want to cry...the fact that somebody took you from him, it leaves me speechless," she said, adding "This feels like a nightmare. The thing is it's not a bad dream. It's reality."

"I never imagined that I would be standing here," Katie Wright, Daunte Wright's mother, said. "The roles should completely be reversed. My son should be burying me."

Wright was a "warm and loving person who would do anything for his family and friends," his obituary said. He loved the Fourth of July, when he would gather with his family and light fireworks. And he became a father in 2019, when his son, Daunte Wright Jr., was born.

"My son had a smile that was worth a million dollars," Wright said. "When he walked in the room, he lit up the room. He was a brother, a jokester, he was loved by so many. He's going to be so missed."

"Our heart is broken with yours as we come to lay him to rest," Crump told Wright's parents. "But, most importantly, we celebrate his life, and we define his legacy once more: Daunte Wright's life mattered."

Crump acknowledged Floyd's family at the funeral, saying, "This time last year, they were being introduced to the world because they became part of a fraternity that no family wants to be a part of."

The families of Philando Castile, Oscar Grant, Jamar Clark and Emmett Till also were at the funeral, Crump said, along with Kenneth Walker, the boyfriend of Breonna Taylor, who was shot and killed by Louisville police as they executed a no-knock warrant last March.

A gun said to be mistaken for a Taser

"I felt anger, I felt sadness, I felt loss and I felt helpless," Wright's mother told reporters. "I don't want to feel helpless. I need my son to have justice."

The Wright family in recent days has drawn strength from relatives of Floyd.

"And that family, they see us, and they give us hugs, you know, just -- yes, encouragement to keep going because that's what we're going to do. We're going to keep fighting."