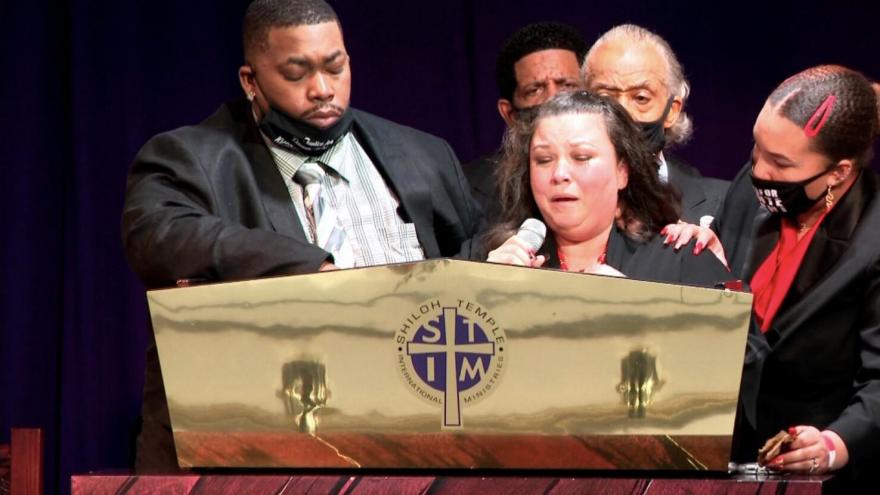 Daunte Wright's mother, Katie Wright, said her late son "had a smile that was worth a million dollars" during his funeral today in Minneapolis.

(CNN) -- The families of George Floyd and Philando Castile joined mourners in Minneapolis on Thursday to bid farewell to Daunte Wright, a Black man whose death this month at the hands of a police officer prompted renewed cries for justice and accountability.

In his eulogy for Wright, whom he called the "Prince of Brooklyn Center," the Rev. Al Sharpton referred to "a resting place ... a martyr's bench," where the 20-year-old could take his seat next to other Black men killed in encounters with police.

"The world will never be the same," he added, "because we are going to stand up for situations like this."

Wright's death on April 11 in the Minneapolis suburb of Brooklyn Center happened about 10 miles from where the trial in Floyd's death was held. Wright's killing sparked nights of protests in Brooklyn Center and reignited conversations about policing and the use of force.

"I never imagined that I would be standing here," Katie Wright, Daunte Wright's mother, said during the funeral. "The roles should completely be reversed. My son should be burying me."

Wright was born in St. Paul, Minnesota, and moved to Minneapolis at age 7, according to the obituary included in the funeral program. He attended Edison High School, where he excelled at sports and played basketball, the obituary said.

Wright was a "warm and loving person who would do anything for his family and friends," it said. He loved the Fourth of July, when he would gather with his family and light fireworks. And he became a father in 2019, when his son, Daunte Wright Jr., was born.

"My son had a smile that was worth a million dollars," Katie Wright said. "When he walked in the room, he lit up the room. He was a brother, a jokester, he was loved by so many. He's going to be so missed."

"Our heart is broken with yours as we come to lay him to rest," Crump told Wright's parents. "But, most importantly, we celebrate his life, and we define his legacy once more: Daunte Wright's life mattered."

In attendance Thursday were members of George Floyd's family, whom Crump acknowledged, saying, "This time last year, they were being introduced to the world because they became part of a fraternity that no family wants to be a part of."

The guilty verdict this week in the trial of Derek Chauvin loomed large at the funeral Thursday -- a focus of celebration as well as a source of hope that Wright's loved ones would see a similar outcome in his case.

"While this was a historic moment for our country, we cannot confuse accountability for justice," Minnesota Sen. Amy Klobuchar said. "Because true justice is not done as long as having expired tags means losing your life during a traffic stop," she added, a reference to the stated reason police initially pulled Wright over.

The families of Castile, Grant, Jamar Clark and Emmett Till also were at the funeral, Crump said, along with Kenneth Walker, the boyfriend of Breonna Taylor, who was shot and killed by Louisville police as they executed a no-knock warrant last March.

Speakers called for systemic change, including Sharpton, who in delivering Wright's eulogy, reprised a role he played at Floyd's funeral nearly 11 months ago in the same city.

He specifically called for the passage of the George Floyd Policing Act, saying, "We are going to make it against the law across this country to keep having funerals for our young princes ... God has turned the page in the state of Minnesota and we're never going back no more."

Another gun said to be mistaken for a Taser

"I felt anger, I felt sadness, I felt loss and I felt helpless," Wright's mother told reporters last Friday. "I don't want to feel helpless. I need my son to have justice."

The family hopes to see "some type of justice," Wright's aunt, Naisha Wright, said Thursday, as Daunte Wright joins the list of Black men killed by US police, including Grant. He was fatally shot in 2009 at age 22 by an officer in Oakland, California, who said he intended to draw and fire his Taser rather than his gun.

Justice "would be a bittersweet moment, of course, because again, today we close that casket on my nephew," Naisha Wright said. "This is the last day that we can ever touch, we can ever see him. We can give something where other families don't have to go through this."

The Wright family in recent days has drawn strength from relatives of Floyd.

"And that family, they see us, and they give us hugs, you know, just -- yes, encouragement to keep going because that's what we're going to do. We're going to keep fighting."

To mark the start of Wright's funeral, Gov. Tim Walz issued a proclamation calling for two minutes of silence at noon CT in his honor.

"We know that this tragedy is connected to the deep, systemic racism in our society that Black people in Minnesota and across the country face every single day," the proclamation by Walz reads. "While nothing can bring Daunte Wright back to his loved ones, we must continue to work to enact real, meaningful change at the local, state, and national levels to fight systemic racism so that every person in Minnesota --- Black, Indigenous, Brown, or White -- can be safe and thrive."

Wright's killing is the latest in a string of deaths of Black men during police encounters in the Minneapolis-St. Paul area in the past five years, including the shooting of Castile in Falcon Heights in 2016 and the death of Floyd in May.

"It's too often that traffic stops end up as deadly sentences, a death sentence," Crump said Thursday. "We're going to have to make sure that Daunte Jr. knows that we stood up for his father."