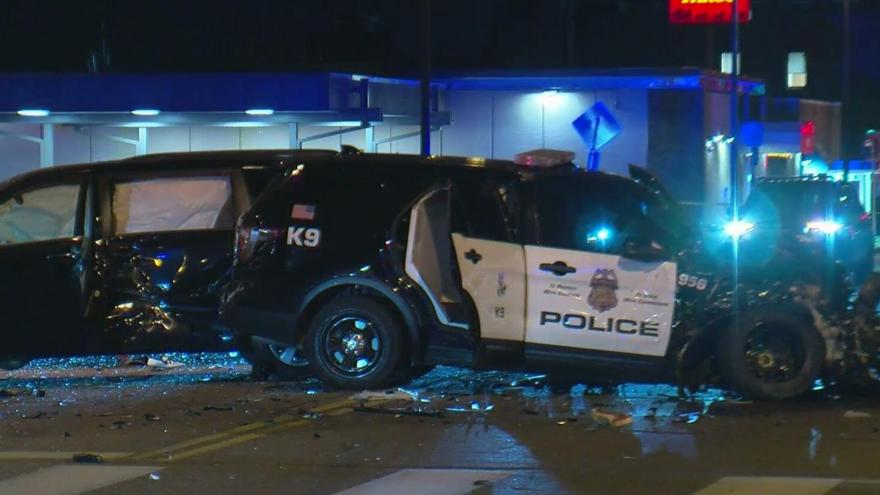 Frazier identified her uncle as Leneal Lamont Frazier in a Facebook post, saying she is "so hurt" and "nothing feels real."

"Minneapolis police has cost my whole family a big loss ... today has been a day full of heartbreak and sadness," Frazier wrote.

An officer attempted to stop a carjacked vehicle involved in several robberies when the driver fled, the Minneapolis Police Department said on Tuesday morning.

The officer pursued the vehicle and as he entered an intersection, "collided with a vehicle that was (traveling) westbound. A southbound vehicle was also involved in the crash," Minneapolis Police spokesperson John Elder said in a statement.

The officer and the driver of the westbound vehicle were taken to the hospital where the driver died and the "officer was treated for serious but non-life-threatening injuries," according to the police statement.

Officials have not publicly identified the officer.

The Hennepin County Medical Examiner's Office identified the driver as Leneal Frazier in a news release and said he was "was the driver of a vehicle that was struck by another vehicle" and that his "cause of death is multiple blunt force injuries."

Frazier slammed police for conducting a high-speed chase in a residential area, writing on Facebook, "It's not fair how the police can just go around killing people... you took an innocent life trying to catch someone else."

"He would help you if you needed help, he'll give you the shirt off his back if he had to ... he was always that type of person," Cheryl Frazier said.

The Minnesota State Patrol is leading the investigation into the crash.

"At the request of Minneapolis Police Department, the State Patrol will lead the investigation into the fatal crash that occurred at 41st Avenue North and Lyndale Avenue North on July 6. This is an open and active investigation. When completed, the State Patrol will turn its findings over to the county attorney for review," said Minnesota Department of Public Safety spokesman Bruce Gordon.