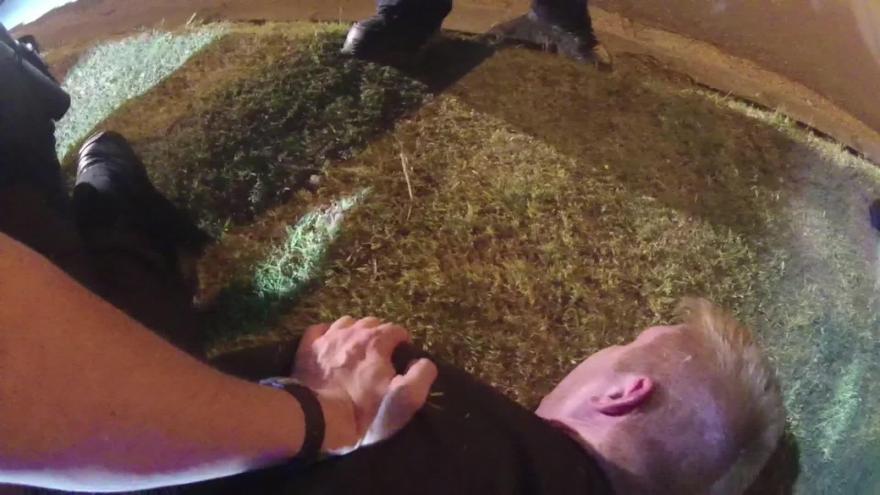 The City of Dallas and its police department fought the release of the footage, first citing an ongoing investigation that saw three officers indicted, then the case's dismissal.

(CNN) -- The body camera footage tells the story: Tony Timpa was struggling, begging Dallas police officers who were holding him in a controversial position to let him go.

Within minutes he had stopped breathing, while officers joked that he had fallen asleep, according to the footage first obtained from the police department by The Dallas Morning News after a nearly three-year battle for its release -- part of the newspaper's investigation into the August 2016 death of the 32-year-old man.

The City of Dallas and its police department fought the release of the footage, first citing an ongoing investigation that saw three officers indicted, then the case's dismissal.

'The public has a compelling interest'

But a federal judge ruled this week in favor of the Timpa family, The Dallas Morning News and NBC5, saying "the public has a compelling interest in understanding what truly took place during a fatal exchange between a citizen and law enforcement."

"...The Court holds that there is no longer good cause to shield the documents from public scrutiny," US District Court Judge David C. Godbey wrote in his order.

"Because there is pending litigation surrounding this incident, we are unable to comment on the actions of the officers. You may request the investigation and any other material through our open records process," Carlos Almeida, a public information officer for the Dallas Police Department, said.

CNN filed an open records request and was notified by email the request could take up to 20 days to process. The attorney for the Timpa family provided CNN with the footage from two police body cameras - one was 27 minutes, and the other, 18 minutes.

Timpa's family has filed a federal lawsuit against the city and the officers, alleging the officers used excessive and deadly force that "no reasonable officer could believe that use of force was justified."

The wrongful death lawsuit, which was first filed in December 2016, accuses the officers of false imprisonment, assault and battery and negligence. The family is seeking "actual and consequential damages," according to the lawsuit filed by the family's attorney, Geoff J. Henley.

Timpa's family alleges in the lawsuit that the city and the police have withheld the details about what happened the night Timpa died. The police department and city have declined to comment on the civil lawsuit, citing ongoing litigation.

From there, the details diverge.

He was initially restrained and handcuffed by private security officers before police arrived on the scene, according to court documents.

A police press release more than a year later, dated December 7, 2017, said Timpa was arrested "due to his erratic behavior."

"During the arrest, he was combative and aggressive. While taking Mr. Timpa into custody, he was subjected to physical restraint and was later pronounced deceased," the release said.

The release said the Dallas County Medical Examiner ruled the death a homicide and determined Timpa "died of sudden cardiac arrest, secondarily caused by the toxic effects of cocaine and stress associated with physical restraint."

'He didn't just die down there, did he?'

The officers said they used only enough force to restrain Timpa, according to police incident reports reviewed by The Dallas Morning News.

But the body camera footage released this week shows the officers holding Timpa in a prone position, face down in the grass while officers swap out his handcuffs and zip-tie his legs. Timpa can be seen struggling, begging the officers to stop holding him down. He screams, "You're gonna kill me." One of the officers repeatedly tells him to relax, saying "You're going to be all right."

The footage shows Timpa, his face down in the grass, falling unconscious. The officers can be heard making jokes about Timpa falling asleep and about waking him up for school. One officer appears to mimic a teenager, saying: "I don't want to go to school! Five more minutes, Mom!"

The footage shows officers and paramedics putting Timpa's lifeless body onto a gurney, and one of the officers can be heard asking, "He didn't just die down there, did he?"

Once in the ambulance, paramedics tell the officers he is not breathing.

A review of the footage by CNN appears to show Timpa stopped breathing within 20 minutes of police arriving. He was later pronounced dead at a local hospital, according to court documents.

Three police officers were indicted on charges of misdemeanor deadly conduct, according to the 2017 police press release and court records.

The indictments were handed down more than a year after Timpa's death and three months after The Dallas Morning News published its investigation into the death.

On March 18, the Dallas County District Attorney's office dismissed the charges, saying the decision was made following a lengthy investigation into the official cause of death and a discussion with three medical examiners.

"They stated they do not believe the officers acted recklessly. Additionally, they cannot, and will not, testify to the elements of the indictment beyond a reasonable doubt," according to a news release by the DA's office.

At a news conference in Dallas on Friday, Timpa's mother, Vicki Timpa, said that her son's screams on the footage have long haunted her.

"I have been trying to get it released since I first saw it," she said, "because it is my own private nightmare."