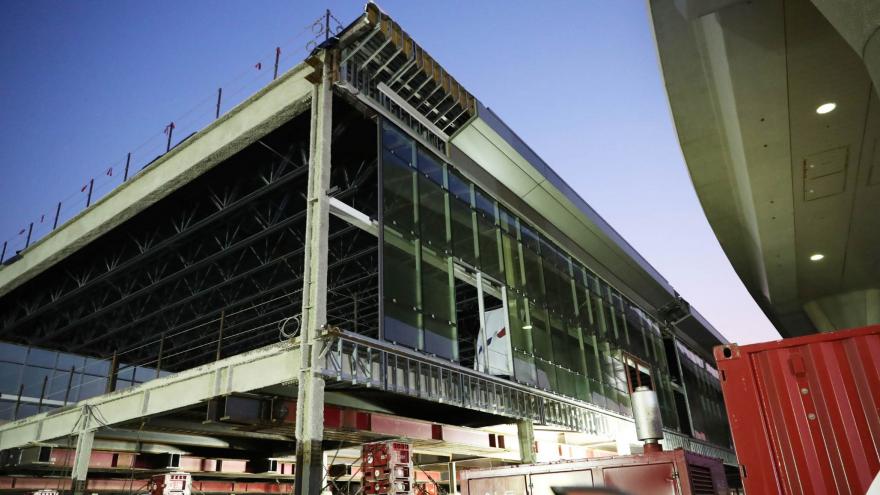 (CNN) -- Airport gates are usually the last point of solid ground that fliers experience before taking to the skies, but at one US airport this month, a remarkable engineering feat saw several gates embark on their own incredible journey.

In what's believed to be an aviation industry first, four newly built gates -- boxy rooms made of concrete, glass and steel -- could be seen crawling in the middle of the night across the tarmac at Texas' Dallas-Fort Worth International Airport, the second busiest airport in the United States, before being installed in their new home at Terminal C.

The almost inconceivable achievement was completed late last Thursday night and into the following morning, when the final gate -- built remotely on airport land for its Terminal C -- was carried via a high-tech, flatbed truck across one runway and hooked up to the terminal for use by American Airlines at their primary hub.

Three other new gates were moved the same way from August 26 through September 8. Next year, passengers will be boarding and disembarking flights through them, if all goes according to plan.

DFW officials told CNN in an exclusive interview that this mode of gate construction and transport -- in the works before the pandemic began -- is a first for airports worldwide.

They also said it could create a template for other airports to copy, since it creates both time and cost efficiencies and also offers sustainability features.

Terminal C is fully occupied by American, which operates narrow-body and regional aircraft there. It is also DFW's largest, busiest and oldest terminal.

DFW Chief Executive Sean Donohue said Terminal C's five 1988 gates were supposed to be used for 10 or 15 years at most. Because of their central location and constant use, DFW chose not to replace them until now.

Their demolition began in February and was finished in March, when work on the foundation and underground utilities for the new gates began at the terminal. This work was completed in August.

Such a complicated project needed a lot of players to make it happen.

They came up with a scheme to build four new gates remotely and to renovate the fifth old gate on-site.

DFW could build the four new gates remotely because of its tremendous size: Encompassing 17,000 acres in the vast plains of North Texas between Dallas and Forth Worth, it is the second-largest airport in land area in the United States.

Khaled Naja, DFW's executive vice president of infrastructure and development, explained another appeal of the plan: By working at the remote site next to the airfield on the east side of the airport, DFW could speed up what was essentially a prefabrication process.

Airline operations at DFW cease each night at 11 p.m. The four new gates -- broken up into six prefabricated modules -- were moved by a high-tech, flatbed truck on six overnight shifts, the first running August 26-27 and the last September 9-10.

After the modules were moved, they were welded to the end of Terminal C previously occupied by the 1988 gates.

The four new gates occupy a total of 80,000 square feet and have prefabricated steel frames, glass walls, concrete floors and roofs made of concrete, asphalt and fiberglass.

Now that they are in place, their interiors will be finished.

This process will include connecting underground and aboveground utilities and installation of restrooms. Once this work is done, American will be able to fit out the gates' interiors, adding seats, desks, signs and the architectural framework for concessions.

The opening of the new gates is scheduled for June 2022.

The fifth new gate will be built on-site at Terminal C from June through August of 2022. During this process, travelers will be able to bypass the construction as needed by walking through the terminal's hall, which will be unobstructed.

Donohue said the new gates will offer traveler-friendly features he hopes will be available throughout all five of DFW's terminals long-term.

Each new gate's space will be about 30% larger than that of other DFW gates, while new electric signs will show flight information easily visible throughout the gate area.

The new gates' restrooms also will provide information on availability of stalls there and elsewhere in the terminal, a feature DFW began offering in May 2020 in Terminals A and D.

Most significantly, the new gates' walls are made of what is called "dynamic glass," which Donohue said will make temperatures in gate areas 15 to 20 degrees cooler in the summer.

Faster and cheaper than traditional methods

Donohue said the construction and moving process of Terminal C's new gates "enabled us to deliver the project" 20% faster and 25% more cheaply than if traditional construction methods had been used.

Donohue also said the Covid-19 pandemic had had "no major impact" on this process.

DFW said it's been contacted by other domestic and international airports requesting information on the Terminal C gates project.

"As airports, we do share a lot of information, and we are open to sharing this with other airports," said Donohue.

"Net net, it will be a good thing if airports can do such projects efficiently, from a time and cost perspective," he added, predicting that what DFW has done could be "a complete paradigm shift in terminal development, helping deliver them much faster and more efficiently."

Sustainability is also a factor, according to Naja.

The dynamic glass will keep gate areas cooler and thus reduce the need for air-conditioning and electricity, while the remote construction of the gates minimized waste since they were fabricated to size.

He predicted other airports and airlines beside American, which occupies Terminal C, would find DFW's concept very attractive.

"If an airport can spend less on its terminal investment, it can charge airlines less fees, which will mean lower fares for passengers, better profitability for airlines," he explained.

American Airlines did not respond to a request for comment on its new gates at DFW.