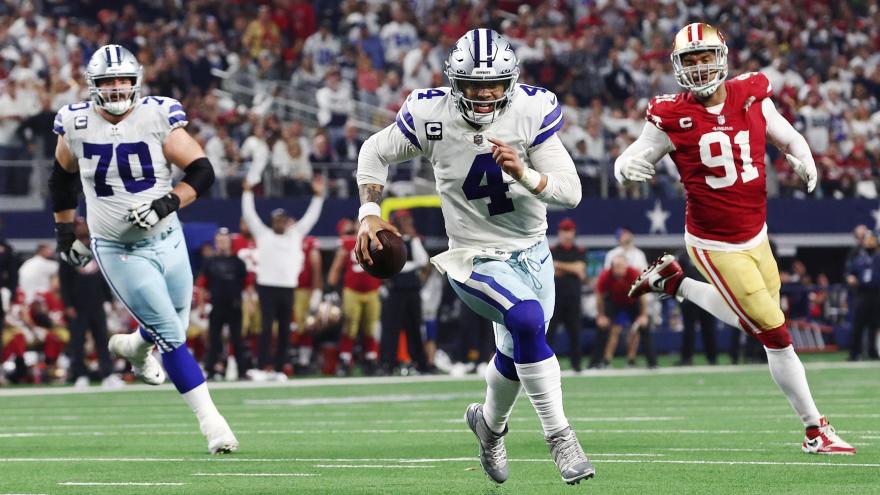 (CNN) -- The Dallas Cowboys' 2021 season couldn't have ended in a more heartbreaking manner for fans, and they wasted no time in expressing that frustration.

Shortly after the Cowboys' 23-17 loss to the San Francisco 49ers on Sunday in the NFC Wild Card game, video captured fans throwing trash at players and referees as they ran off the AT&T Stadium field.

Cowboys defensive end DeMarcus Lawrence could be seen batting away an object that was about to hit him, although he later told reporters that it was aimed at the officials.

When star quarterback Dak Prescott was asked about the fans' actions, he initially expressed his disappointment thinking that they were directing their anger at the players.

But when he was informed the trash was aimed at the referees, Prescott's message changed: "Credit to them."

After the circumstances surrounding the ending of the game, it's perhaps understandable why Cowboys fans were frustrated.

Despite all the offensive talent the team has, Dallas struggled to move the ball against the 49ers -- the Cowboys had 11 possessions, seven of which ended with no points.

But trailing by six points and with just over 30 seconds on the clock, Prescott had an opportunity to make amends.

He managed to move the offense to the San Francisco 41-yard line with 14 seconds left, at which point the 49ers called a timeout to stop the clock.

However, instead of throwing for the endzone -- and with no timeouts remaining -- Prescott ran 17 yards on a designed quarterback run.

As the Cowboys and the 49ers attempted to get into position for Prescott to stop the clock by throwing the ball to the turf, umpire Ramon George was also running to spot the ball.

George collided with Prescott before the quarterback could stop the clock and time expired before the QB could get the snap off.

In his press conference after the game, Prescott said the intended play was something he and his teammates had practiced.

"We've practiced it," Prescott said. "You hand it to the center. The umpire, all he has to do is usually come in and tap the ball. Don't necessarily know exactly ... why the hit (with the official) happened, I guess. Yeah, I know he's going to come in and touch the ball. We could say, 'Yeah, he needs to be closer to the ball,' or whatever, but in hindsight, it's just tough. Just tough to accept."

Referee Alex Kemp said that George spotted the ball correctly and explained that he bumped into Cowboys players because he was moving the ball to its "proper spot" in his postgame pool report.

Cowboys head coach Mike McCarthy said he believed the sequence of events would be reviewed by officials and time would be added back on to allow his team to have one final shot at winning the game.

However, that wish was not granted and the Cowboys were knocked out of the playoffs at the first time of asking.