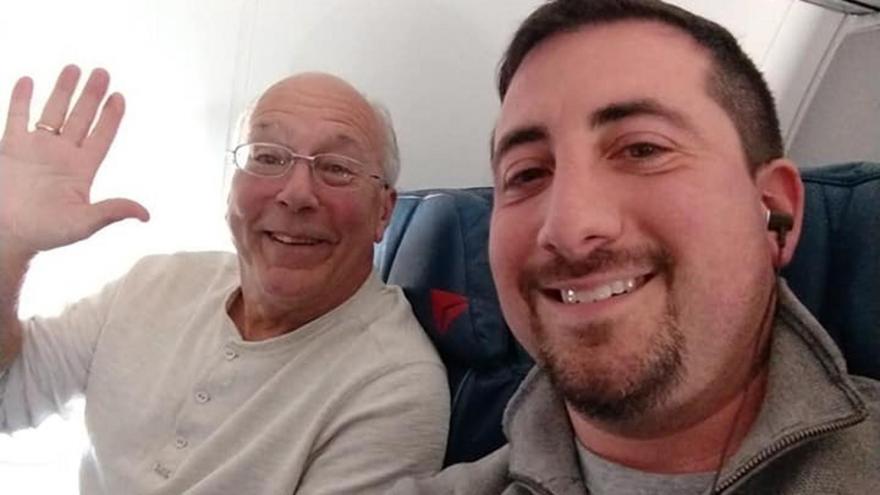 Beaming father Hal Vaughan, left, sits next to fellow passenger Mike Levy on one of his daughter's holiday flights. Vaughan booked multiple flights so he could see his daughter Pierce, a flight attendant for Delta Air Lines, over the holidays.

(CNN) -- Christmas is a time of the year when you're supposed to spend quality time with your family. But what to do if your daughter is working for an airline over the holidays?

In a heartwarming gesture, Hal Vaughan booked multiple flights so he could see his daughter Pierce, a flight attendant for Delta Air Lines.

A fellow passenger on one of those flights, Mike Levy, shared Vaughan's story on Facebook, calling him a "fantastic father."

"The flight was from Fort Myers (Florida) to Detroit," Levy told CNN. "While chatting with Hal, I mentioned I was heading back home. He then told me about his daughter working as our flight attendant and how he was along for the ride to spend Christmas with her.

"I was amazed and thought he was such a phenomenal father for going well out of his way to be with his daughter."

He added, "Pierce is very sweet. She definitely knows now how great her dad really is."

Pierce Vaughan later shared Levy's viral post: "Dad's first trip using his benefits was a success! A special thanks to all of the patient, wonderful gate agents around the country and my perfect crew. He made it on every flight and even got first class RSW-DTW (Christmas miracle)."

Levy said the father struggled a bit through airports due to an accident that happened this year.

"He is still recovering from a neck injury from earlier in the year, which had left him quadriplegic for a period," Levy said. "This was his first trip since the accident."

CNN has reached out to both Hal and Pierce Vaughan.

Delta responded to this story of a dad's devotion to his daughter at Christmastime.

"We appreciate all of our employees for working during the holidays to serve Delta customers, and love seeing this awesome Dad having the chance to spend Christmas with his daughter -- even while crisscrossing the country at 30,000 feet," it said.