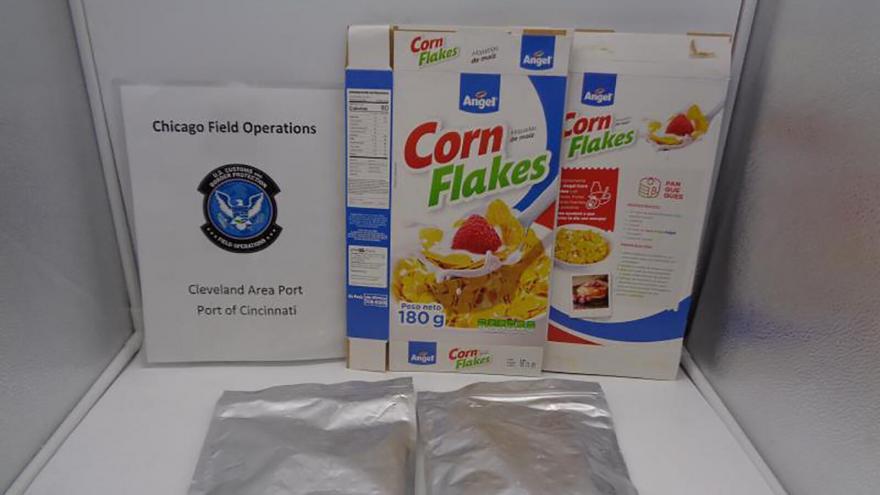 On February 13, US Customs and Border Protection (CBP) officers in Cincinnati intercepted smuggled narcotics in a shipment of cereal originating from South America.

(CNN) -- US Customs and Border Patrol (CBP) seized a shipment of cereal from South America that was covered in cocaine instead of sugar.

CBP officers in Cincinnati, Ohio, intercepted the package on February 13 containing cocaine-coated corn flakes, according to a news release. The cocaine on the corn flakes weighed 44 pounds.

While working on incoming freight from Peru, a CPD narcotic detector dog named Bico flagged the cereal shipment going to a private residence in Hong Kong. Upon further inspection, officers found and tested white powder on the cereal that was positive for cocaine.

"The men and women at the Port of Cincinnati are committed to stopping the flow of dangerous drugs, and they continue to use their training, intuition, and strategic skills to prevent these kinds of illegitimate shipments from reaching the public," Cincinnati Port Director Richard Gillespie said.

On a typical day in fiscal year 2020, CBP said it seized 3,677 pounds of drugs at ports of entry across the nation.

In July, for example, police in Italy discovered cocaine stuffed inside individually hollowed-out coffee beans, after opening a parcel addressed to a fictional Mafia boss from a Hollywood movie.

Correction: An earlier version of this story incorrectly described the weight of the cocaine-coated corn flakes. The cocaine on the corn flakes weighed 44 pounds.