Cuomo apologizes, says he didn't know he was making women uncomfortable and rejects calls to resign 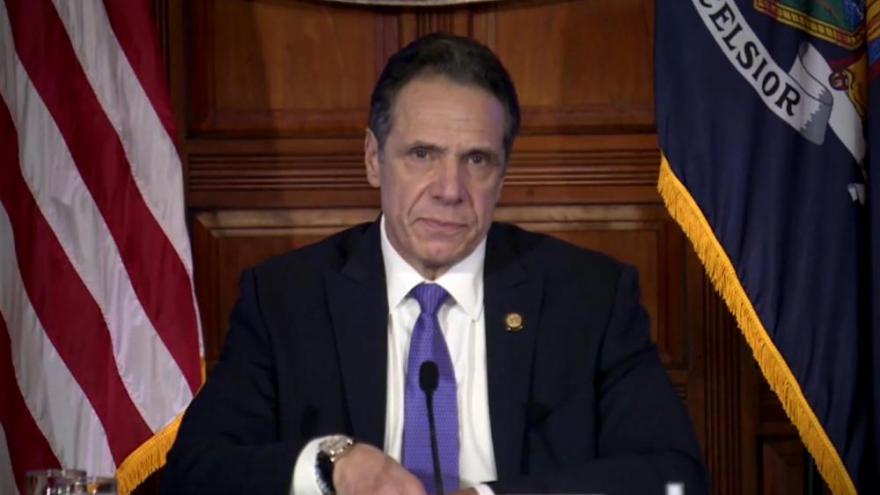 New York Democratic Gov. Andrew Cuomo apologizes for his behavior after two women accused him of sexual harassment and another alleged an unwanted advance, saying he didn’t know he was “making anyone feel uncomfortable” while rejecting calls to resign.

(CNN) -- New York Gov. Andrew Cuomo emerged on Wednesday after more than a week away from the cameras to apologize for his behavior after two women accused him of sexual harassment and another alleged an unwanted advance, saying he didn't know he was "making anyone feel uncomfortable."

But the Democrat flatly rejected calls for his resignation and pleaded with New Yorkers to wait for the state attorney general to issue a report on the matter before forming an opinion on his alleged transgressions. The pending inquiry, though, could take months to complete and Cuomo seized the news conference spotlight in an effort to push back against calls for him to immediately step down.

Cuomo started his briefing speaking about Covid-19 numbers in the state before acknowledging the elephant in the room and pivoting to a statement on the allegations.

"I want New Yorkers to hear from me directly on this. First, I fully support a woman's right to come forward. And I think it should be encouraged in every way," said the governor, who had not taken questions for more than a week. "I now understand that I acted in a way that made people feel uncomfortable. It was unintentional and I truly and deeply apologize for it. I feel awful about it, and frankly, I am embarrassed by it, and that's not easy to say but that's the truth."

Cuomo repeatedly asked New Yorkers to withhold judgment on his alleged actions until an investigation, to be overseen by Attorney General Letitia James, delivered a full report. That position largely reflects the posture of leading state Democrats, including US Senate Majority Leader Chuck Schumer and Sen. Kirsten Gillibrand, who have called for James' independent inquiry but stopped short of weighing in on Cuomo's ultimate fate.

New York state Senate Majority Leader Andrea Stewart-Cousins, in an interview with CNN's Brianna Keilar after the news conference, said much the same -- that Cuomo should resign if the attorney general's office finds wrongdoing.

After a back-and-forth over who would run the investigation last weekend, Cuomo -- who initially pushed for a retired federal judge to carry it out before suggesting James partner with another state official -- relented and sent a referral to the attorney general's office, which will hire an outside firm to conduct the probe. The firm will have subpoena power.

Still, the chorus of voices pushing for Cuomo to step down now is growing. Before he spoke on Wednesday, Democraatic New York City mayoral candidate Maya Wiley released a video calling for his resignation and Democratic state Sen. James Skoufis, chair of the Senate investigations committee, called for the same.

"I cannot in good conscience wait for a months-long inquiry by the Attorney General to run its course," Skoufis said in a statement. "I have seen sufficient evidence to conclude that, beyond a reasonable doubt, the Governor's behavior represents a pattern of abuse that deems him unfit for office. Governor Cuomo must resign."

A 'customary way of greeting'

The three-term governor, who is still expected to pursue reelection next year, faces two allegations of sexual harassment by former aides and one accusation that he made an unwanted advance toward a woman, Anna Ruch, at a 2019 wedding.

Ruch told The New York Times, in an account that was corroborated to CNN by a friend, that Cuomo approached her during a crowded wedding reception in New York in 2019. Ruch told the newspaper she thanked Cuomo for his toast to the newlyweds, and in response, she says he put his hand on her bare lower back, which the Times said was exposed in an open-back dress. The Times published a single photo of Ruch and Cuomo at the event, in which Cuomo appears to be placing his hands around Ruch's face, but it is unclear what happened in that moment.

Ruch has not responded to requests for comment from CNN.

Taking questions after his initial statement on Wednesday, Cuomo continued to apologize but also sought to reframe how the public might view the image of his grasping Ruch's face, describing it as his "customary way of greeting" people and arguing, later on, that he is not "ashamed" of anything he's done in public life.

"You can find hundreds of pictures of me making the same gesture with hundreds of people -- women, men, children, etc.," Cuomo said.

He then referenced his father, the late three-term New York Gov. Mario Cuomo.

"By the way, it was my father's way of greeting people," Cuomo said. "You're the governor of the state, you want people to feel comfortable, you want to reach out to them."

But the governor also acknowledged that his "intent" was a secondary question to how the behavior made those around him feel.

Later on in the question-and-answer session, Cuomo attempted again to draw a line between the behavior for which he asked forgiveness and his standing as an elected official.

"I do not believe that I have ever done anything in my public career that I am ashamed of. I didn't know that I was making her uncomfortable at the time, I feel badly that I did," he said, before again stating, "I understand that sensitivities have changed and behavior has changed."

Charlotte Bennett, a 25-year-old former executive assistant and health policy adviser to Cuomo, told The New York Times that during one of several uncomfortable encounters, Cuomo asked her questions about her sex life during a conversation in his state Capitol office and said he was open to relationships with women in their 20s.

She told the Times that she interpreted the exchange -- which she said took place in June, while the state was in the throes of fighting the pandemic -- as what the newspaper called "clear overtures to a sexual relationship."

In his initial response to the story over the weekend, Cuomo said he believed he had been acting as a mentor and had "never made advances toward Ms. Bennett, nor did I ever intend to act in any way that was inappropriate."

In a statement released after Cuomo's remarks on Wednesday, Debra Katz, an attorney for Bennett, said the news conference was "full of falsehoods and inaccurate information" and rejected Cuomo's claim that he didn't know he was making anyone uncomfortable.

"My client, Charlotte Bennett, reported his sexually harassing behavior immediately to his Chief of Staff and Chief Counsel. We are confident that they made him aware of her complaint and we fully expect that the Attorney General's investigation will demonstrate that Cuomo administration officials failed to act on Ms. Bennett's serious allegations or to ensure that corrective measures were taken, in violation of their legal requirements," Katz said.

Lindsey Boylan, another former aide, alleged that in 2018, the Democratic governor kissed her on the lips following a one-on-one briefing in his New York City office.

Cuomo firmly denied the allegations in a news conference in December when Boylan first made them. CNN has not been able to corroborate the allegations, and when asked for further comment about the allegations, Boylan replied that she was letting her Medium post speak for itself.

Boylan did, however, respond to Cuomo's remarks on Wednesday.

"How can New Yorkers trust you @NYGovCuomo to lead our state if you 'don't know' when you've been inappropriate with your own staff?" she tweeted.

This story has been updated with additional developments and background.