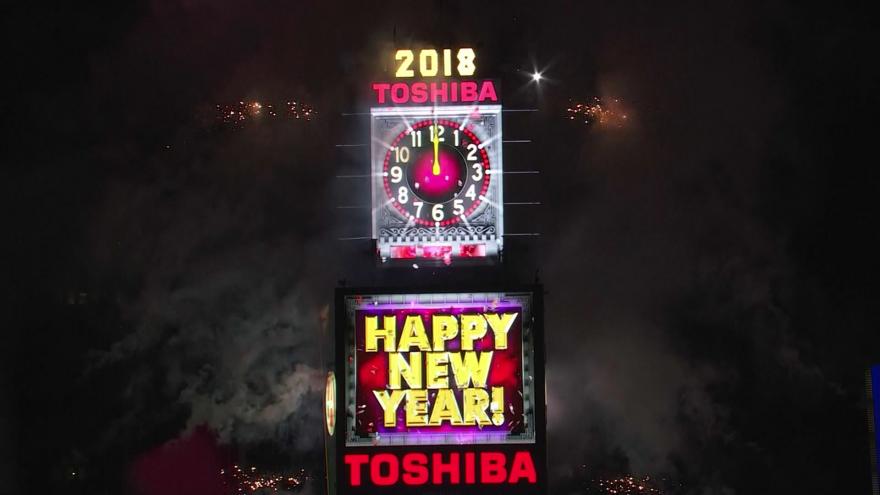 NEW YORK (AP) — The glittering crystal ball dropped with a burst of confetti and dazzling fireworks as revelers rang in 2018 in frigid Times Square — the second-coldest celebration there on record.

It was only 10 degrees Fahrenheit (minus 12 Celsius) in the city, and the celebration was less crowded than other years. Some of the metal pens, usually packed with people, were only partially full. Bundled up in hats, gloves, face masks and numerous layers of clothing, partygoers danced and hugged and kissed as the ball dropped.

Eva Santos, of New York, said she hoped 2018 would bring more unity "for our countries and other countries."

"I hope for a peaceful year and just love, I hope for more love," she said. "We're hoping for better things to come. Our country needs to get better."

New Yorker Colleen Keenan was with her son Kevin Keenan and his friend Devin Wright when midnight hit.

"It is a beautiful experience. There's nothing like it, nothing at all like it," she said as the ball dropped. "Times Square is the place to be on New Year's Eve, that's for sure. Now everyone is going to get drunk and get warm."

Wright, of Long Beach, California, said she was "intoxicatingly in love with every moment of today."

"I'm freezing, but it's worth it," she said. "Every second in this miserable cold is worth it."

Mariah Carey made it through her set on "Dick Clark's New Year's Rockin' Eve with Ryan Seacrest" after bungling the performance last year. She dressed in a floor-length gown and a furry white coat, performing her 1990s hits "Vision of Love" and "Hero."

Carey asked for hot tea between songs — and joked that it was "a disaster" that there wasn't any. But a year ago she stumbled through her short set, failing to sing for most of it despite a pre-recorded track of her songs playing in the background. She was visibly upset during that performance and blamed the show's production team, but they ultimately buried the hatchet.

The dazzling finale of the show was the traditional drop of a Waterford Crystal ball down a pole atop 1 Times Square.

This year, the ball was 12 feet (3.5 meters) in diameter, weighs 11,875 pounds (5,385 kilograms) and was covered with 2,688 triangles that change colors like a kaleidoscope, illuminated by 32,256 LED lights. When the first ball drop happened in 1907, it was made of iron and wood and adorned with 100 25-watt light bulbs. The first celebration in the area was in 1904, the year the city's first subway line started running.

After two terrorist attacks and a rampaging SUV driver who plowed into a crowd on the very spot where the party takes place, police were taking no chances. Security was tighter than ever before. Garages in the area were sealed off. Detectives were stationed at area hotels working with security officials to prevent sniper attacks.

Thousands of uniformed officers lined the streets. Concrete blocks and sanitation trucks blocked vehicles from entering the secure area where spectators gathered. Partygoers passed through one of a dozen checkpoints where they were screened and then screened again as they made their way to the main event.

At 48th Street and Seventh Avenue, Chris Garcia, his girlfriend, Zayra Velazquez, and her brother Edgar Valdez stood rigidly, having waited in the cold for almost six hours. Valdez said he felt "pretty safe" at the event.

"They checked us pretty good," he said. "Police checked what we had, and another scanned us with metal detectors."

The police department estimated that it costs $7.5 million to protect the event.

Sarah Cole and Michael Carter, from Newfoundland, Canada, said they weren't deterred by the weather because they're used to it.

"The experience is 100 percent worth it," she said. "The atmosphere, the people, the entertainment. What's a little cold feet?"

Some wore red scarfs that read "Happy New Year" and others donned yellow and purple hats as a pizza deliveryman sold pies to the hungry crowd.

In a prime viewing spot near 42nd Street, Alexander Ebrahim grinned as he looked around at the flashing lights of Times Square.

"I always saw it on TV, so I thought why not come out and see it in person," the Orange County, California, resident said. "It's an experience you can never forget."

Michael Waller made a snap decision on Saturday evening to drive straight from Columbus, Ohio. He made it to Times Square at 8 a.m. and waited all day in front of the ball.

"I didn't want to stay home for this, by myself," he said.

Tarana Burke, an activist who started a #MeToo campaign a decade ago to raise awareness about sexual violence, started the ceremonial ball drop, pushing the crystal button that officially began the 60-second countdown to the new year.

Just minutes after midnight, partygoers started to drain from the area as if a giant tub stopper had been pulled up. And the cleanup began, led by a small army of city employees including more than 200 sanitation workers, who clear the area of confetti and other garbage. Crews removed more than 44 tons (40 metric tons) of debris last year.