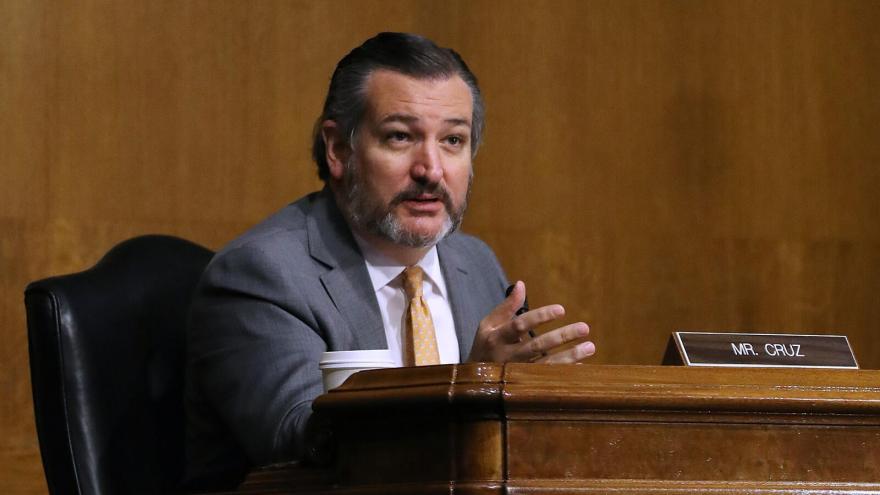 Sen. Ted Cruz and his family flew to Cancun, Mexico, as a winter disaster in his home state left millions without power or water, according to photos posted on social media and confirmed to CNN by a person familiar with the travel itinerary.

(CNN) -- Sen. Ted Cruz said that flying to Cancun, Mexico, as a winter disaster in his home state left millions without power or water "was obviously a mistake" and that "in hindsight I wouldn't have done it."

Cruz, a Texas Republican, spoke to reporters after returning to his Houston home Thursday evening from a trip that has earned fierce criticism on social media and in his own backyard.

"I started having second thoughts almost the moment I sat down on the plane, because on the one hand, all of us who are parents have a responsibility to take care of our kids, take care of our family. That's something Texans have been doing across the state," said Cruz, who had said in an earlier statement that he flew to Mexico because his daughters had asked to take a trip and he was trying to be a "good dad."

"But I also have a responsibility that I take very seriously for the state of Texas and frankly, leaving when so many Texans were hurting didn't feel right and so I changed my return flight and flew back on the first available flight I could take," Cruz continued.

With protesters audible outside his home, Cruz said he understands the anger many Texans feel toward his decision.

"Of course, I understand why people are upset. Listen, we're in a strange time where Twitter's been going crazy and the media is going crazy and there's a lot of venom and vitriol that I think is unfortunate frankly on both sides," Cruz said. "I think everyone ought to treat each other with respect and decency and try to understand each other more particularly at a time of crisis."

Cruz had confirmed the trip in a statement to CNN earlier in the day, saying he flew down for a night because his daughters "asked to take a trip with friends."

"With school cancelled for the week, our girls asked to take a trip with friends. Wanting to be a good dad, I flew down with them last night and am flying back this afternoon," he said in the statement. "My staff and I are in constant communication with state and local leaders to get to the bottom of what happened in Texas. We want our power back, our water on, and our homes warm. My team and I will continue using all our resources to keep Texans informed and safe."

But texts sent by his wife, Heidi, on Wednesday appeared to paint a different picture, The New York Times reported. She asked friends in a group chat, "Anyone can or want to leave for the week?" the Times reported Thursday.

"We may go to Cancún," she said, according to the media organization, referencing a "direct flight" and "hotels w capacity. Seriously."

Their house was "FREEZING," she said, per the Times, and suggested a trip lasting until Sunday. They had stayed at the Ritz-Carlton in Cancún "many times," she said, highlighting the hotel's strong security and rate that week, the Times reported.

Cruz arrived at the George Bush Intercontinental Airport later Thursday, according to a source who was on the flight with him.

"I couldn't take a morning flight because the current restrictions require a Covid test, so I had to get a Covid test this morning, before I could get on a flight back, so I took the first flight I could get after getting the Covid test and testing negative," Cruz told reporters Thursday evening.

A source familiar with the situation told CNN that some of the senator's senior aides did not know he flew down to Mexico until the pictures appeared on social media and inquiries started to come into the office.

It is one of the reasons they weren't ready with an explanation for many hours.

The trip was immediately criticized, including by Texas state Rep. Gene Wu, a Democrat representing southwest Houston, who tweeted a photo of Cruz aboard a flight, saying Cruz was flying south "while the state was freezing to death and having to boil water."

The police request from Cruz's office is not unusual as members of Congress have been advised by law enforcement to seek police assistance as they travel by air.

Congress is not in session this week following the President's Day holiday.

Cruz, who was retweeting notices about electricity and Texas Gov. Greg Abbott on Wednesday, has been silent on social media Thursday.

In a radio interview Monday, Cruz told people to "stay home" and not "risk it. Keep your family safe and just stay home and hug your kids."

As an official elected to federal office, Cruz doesn't have an on-the-ground role in the response to the storm, but natural disasters are often a time in which constituents often reach out to their elected officials for help and access to resources.

The blame for the outages has largely been placed on the Electric Reliability Council of Texas (ERCOT).

Abbott said Wednesday afternoon that he spoke with both the lieutenant governor and the state speaker and that an investigation of ERCOT is slated to begin next week.

But in the meantime, millions of Texans were left without power or running water in the wake of the storm. Power is slowly being restored to homes.

Since last Thursday, 16 Texans have died due to the extreme weather, according to a CNN tally.