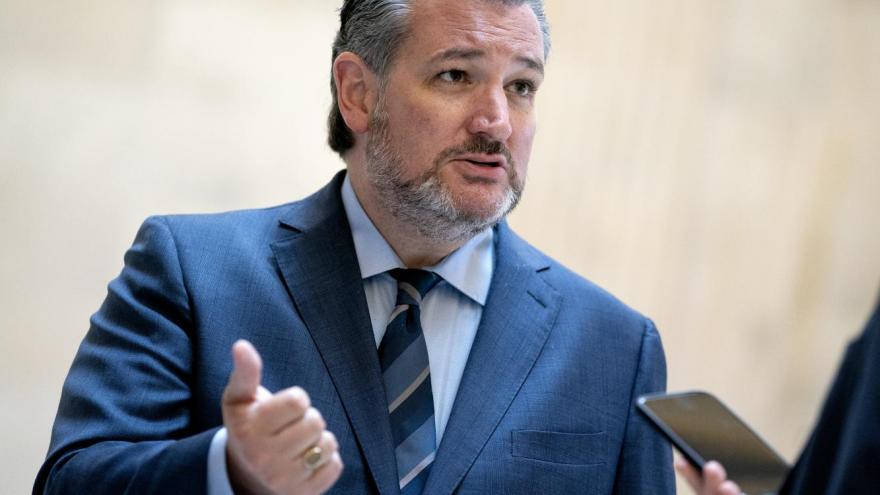 Sen. Ted Cruz is facing renewed backlash from users on Twitter after sharing a news alert from a local Texas station promoting the return of flights to Cancun. Cruz is seen here at the Russell Senate Office Building on Capitol Hill on April 13, 2021 in Washington, DC.

(CNN) -- Sen. Ted Cruz is facing renewed backlash from users on Twitter after sharing a news alert from a local Texas station promoting the return of flights to Cancun.

"Awesome!" the Texas Republican tweeted in response to the tweet from Houston's ABC 13 that asked viewers: "Excited to travel again? This airline can hook you up with a cheap flight to sunny Cancun or even Las Vegas!?"

In February, the senator had hurriedly returned to Texas after being spotted flying to Cancun, Mexico, as a winter disaster in his home state left millions without power or water. Upon his return, Cruz had said the trip "was obviously a mistake" and that "in hindsight I wouldn't have done it."

At the time, Cruz tried to explain his decision, telling reporters, "I started having second thoughts almost the moment I sat down on the plane, because on the one hand, all of us who are parents have a responsibility to take care of our kids, take care of our family. That's something Texans have been doing across the state." The senator also said he had flown to Mexico because his daughters had asked to take a trip and he was trying to be a "good dad."

"But I also have a responsibility that I take very seriously for the state of Texas and frankly, leaving when so many Texans were hurting didn't feel right and so I changed my return flight and flew back on the first available flight I could take," Cruz said at the time.

Cruz also said in February that he understood why Texans were upset with his decision to fly to a Mexican getaway in the middle of the crisis. "Of course, I understand why people are upset. Listen, we're in a strange time where Twitter's been going crazy and the media is going crazy and there's a lot of venom and vitriol that I think is unfortunate frankly on both sides," he said then.

On Tuesday, the senator faced renewed criticism on social media from users who said his attempt at humor was inappropriate.

"The people of your state were in dire straits when you willfully abandoned them," one user wrote. "The fact that you are joking about it confirms that you have no regrets. You are what you are, sir."

Another noted, "Nearly 200 Texans died in the winter storm while @tedcruz was settling into the Ritz Carlton in Cancun. He apparently thinks it's cool to joke about it now."