Workers whittle down piles of uncounted ballots in key states 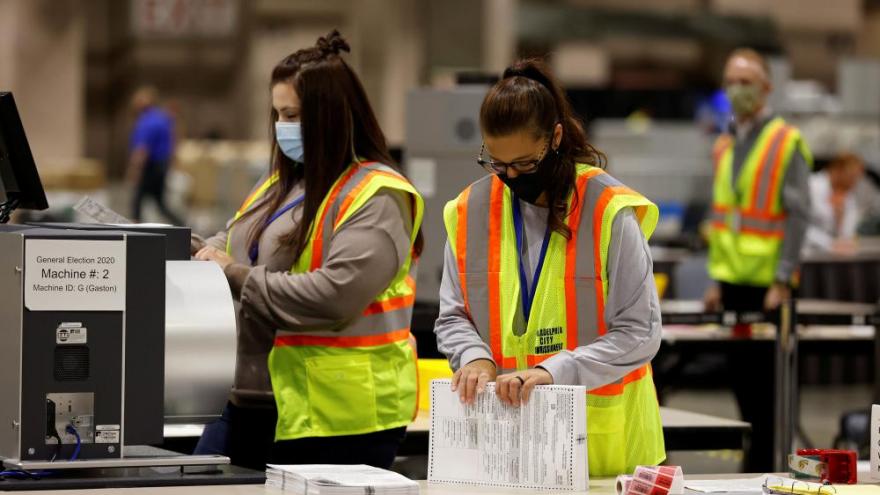 Votes are counted at the Pennsylvania Convention Center on Election Day in Philadelphia, Pennsylvania, U.S. November 3, 2020.

(CNN) -- Officials in key battleground states -- including Pennsylvania, Nevada, Georgia and Arizona -- whittled down the mountains of uncounted absentee ballots Wednesday as President Donald Trump cast doubt on their work.

Two late-counting states, Michigan and Wisconsin, crossed critical thresholds in the afternoon and were called by CNN for former Vice President Joe Biden.

Some of the states not yet called were posting results as they were tallied Wednesday, while another -- North Carolina -- said it would wait to tally outstanding provisional and late-arriving absentee ballots before announcing more results next week. Nevada officials said they did not plan to report new results until Thursday morning. Officials in Georgia and Arizona said they expected to post additional tallies early Thursday morning.

Mail-in ballots, which smashed records this year as a result of the Covid-19 pandemic, have favored Biden, whose campaign encouraged Democrats to vote early, while in-person votes on Election Day appear to have given Trump an advantage.

In Michigan, Pennsylvania and Wisconsin, election officials were not allowed to begin processing absentee ballots until on or just before Election Day, after Republican-led state legislatures successfully opposed changing laws to allow earlier preparations like other states.

CNN on Wednesday projected Biden would win Wisconsin and Michigan. Wisconsin finished counting nearly all of its ballots early in the day after keeping workers going overnight, and Michigan officials said they were hoping to complete the tally of all of its remaining absentee ballots as soon as later Wednesday.

After Biden early Wednesday called for patience while workers continued to count, Trump attacked the legitimate counting of votes and falsely claimed he had won in states where millions of ballots are yet to be counted. He continued to spread false claims about the election on Twitter throughout the day Wednesday.

The Trump campaign said Wednesday it would request a recount in Wisconsin, which candidates can do if they are within 1% of the winner's total. Biden has a roughly 20,000-vote lead after the county finished counting its absentee ballots Wednesday morning.

Ahead of Election Day, the Republican National Committee scaled up for a large-scale legal battle, and Trump's campaign threatened lawsuits on Wednesday in several battleground states. "We have thousands of volunteer lawyers and several law firms already on retainer in these battleground states," said RNC spokesperson Mandi Merritt.

Democrats have also amassed their own legal army to fight any potential court battles.

Pennsylvania Gov. Tom Wolf, a Democrat, said at a press briefing on Wednesday that he is prepared to defend the votes in Pennsylvania as the state continues to process and count mail-in ballots.

"I'm going to fight like hell to protect the vote of every Pennsylvanian," Wolf said Wednesday of the legal challenges to the state's election processes.

There have been tensions at the TCF Center, the convention center in Detroit where absentee ballots are being processed. Several individuals were removed from the ballot counting board, including two who appeared not to be wearing masks and were shouting as they were escorted out, and a third who appeared to have been badgering poll workers.

Pennsylvania Secretary of State Kathy Boockvar said in a press briefing Wednesday evening that the state expects hundreds of thousands more ballots to be counted tonight. But she cautioned it could be days before the "overwhelming majority" of ballots are counted.

The Department of State website said late Wednesday that roughly 70% of mail-in ballots have been tallied so far.

In the major Democratic stronghold of Philadelphia, where more than 350,000 mail-in ballots had been received, city officials still had hundreds of thousands of mail-in ballots left to count on Wednesday, Philadelphia City Commissioner Al Schmidt said on CNN. He noted that Pennsylvania allows mail-in votes to be received and counted up until Friday.

"We are going to continue day and night until we get every one of those votes counted," Schmidt said.

Democratic-leaning Montgomery County, northwest of Philadelphia, planned to count "24 hours a day until completion," according to county spokesperson Kelly Cofrancisco.

In Allegheny County, which includes Pittsburgh, there were about 110,000 absentee ballots remaining late Wednesday.

A handful of Pennsylvania absentee ballots were being challenged in court. A judge heard a GOP challenge to about 93 absentee ballots in Montgomery County over how voters were given opportunities to fix ballots with issues that would have caused them to be thrown out. The Republicans alleged that the county had begun processing mail-in ballots too early and was illegally trying to allow voters to fix defects, such as by adding missing inner envelopes.

The Trump campaign said Wednesday it would seek to challenge late-arriving mail-in ballots in Pennsylvania at the Supreme Court, which had declined to expedite a challenge before the election to the state's law, which allows ballots to arrive three days late if postmarked by Election Day. Boockvar said she has heard of only a "very modest number" of mail-in ballots that arrived after 8 p.m. ET Tuesday, numbering in the hundreds.

Officials in the states where ballots were still outstanding urged patience while the results are calculated.

Nevada election officials said they weren't releasing any results on Wednesday, planning instead to do so on Thursday morning. Secretary of State communications director Jennifer Russell confirmed to CNN officials will provide updated election results at 12 p.m. ET Thursday. Those results will include additional votes from the state's two most populated counties.

In Nevada, which Democrat Hillary Clinton won by a slim margin in 2016, the counting of mail-in votes in populous Clark County stopped overnight on Tuesday and resumed late Wednesday morning, according to the county's registrar of voters. Clark County, which includes Las Vegas, is the home of 70% of all voters in Nevada and heavily Democratic.

Of the 1.2 million ballots sent to Clark County voters, records show 413,000 have been returned so far, of which officials have processed 337,000.

Georgia Secretary of State Brad Raffensperger said Wednesday evening that the state had fewer than 100,000 absentee ballots left to count.

"My team has sent a reminder to counties to get all, let me repeat, all results counted today," Raffensperger said earlier in the day.

Yet in Fulton County, which includes Atlanta, elections director Richard Barron told reporters Wednesday evening that the county still had roughly 20,000 absentee ballots remaining -- and might stop for the night and resume in the morning.

DeKalb County, in Atlanta's eastern suburbs, was down to its final batch of roughly 1,000 mail-in ballots late Wednesday, said Erica Hamilton, the county's director of voter registration and elections.

Georgia ran into some issues as it began to tally absentee ballots on Tuesday. A pipe burst early Tuesday morning at Atlanta's State Farm Arena above the processing room for all absentee ballots in Fulton County, delaying counting there, said county spokeswoman Regina Waller. No ballots were damaged, according to Waller.

A suspected problem with voting tabulation software had caused delays Tuesday in the counting of as many as 80,000 mail-in ballots in Gwinnett County, which is east of Atlanta, according to a county spokesman. Officials believe the software erroneously identified flaws in the way voters filled out the ballots.

Maricopa elections officials reported a batch of mail-in ballots on Wednesday and were expected to release another set of results early Thursday morning ET. The county estimated it had about 338,000 absentee ballots left to process and count, along with 17,000 provisional ballots.

The next biggest share of outstanding votes come from blue-leaning Pima County, home of Tucson, which has just under 91,000 ballots to count.

Of Arizona's 13 other counties, five have not posted information about their number of remaining votes to count. Seven of the remaining eight were counties that Trump won over Clinton in 2016, but they account for about 12% of the known remaining ballots to be counted.

The North Carolina State Board of Elections announced the number of outstanding absentee ballots is 116,000 as of Wednesday afternoon. The state has signaled it's not likely to report additional results until next week. Those are ballots that were requested but not returned, although the state still has to determine how many of those outstanding voters cast a ballot in person on Election Day.

"With very few exceptions, North Carolina's numbers are not going to move until November 12 or 13," North Carolina State Board of Elections Executive Director Karen Brinson Bell said. That's when county boards of elections will meet to consider the remaining absentee and provisional ballots.

The state board says they are now watching for ballots that were mailed back and postmarked by Election Day. In North Carolina, an Election Day-postmarked ballot can be counted if it is received by 5 p.m. ET on November 12.

Several states had other issues pop up that led to delays in counting ballots. In Outagamie County, Wisconsin, which is outside Green Bay, poll workers on Tuesday were working to transfer votes from around 13,500 misprinted absentee ballots to clean ballots that won't jam the electronic tabulating machine, the county clerk told CNN.

In South Carolina, a printing error delayed the counting of 14,600 absentee-by-mail ballots in Dorchester County, north of Charleston, until later in the week, state elections officials said. The marks at the tops of the ballots that alert the scanner to start tabulating votes are too small for the scanner to read, said Todd Billman, executive director of Dorchester County Elections.

An internet outage occurred Tuesday in Osceola County in central Florida, and ballots were taken to the county's elections office for counting, said Brandon Arrington, a county commissioner.

While election officials expressed concern about the challenges of voting during a pandemic, the battleground states reported that voting at polling places was mostly smooth, with only isolated incidents. Michigan Secretary of State Benson said Tuesday that "precincts are islands of calm," while the spokesman for Florida's Broward County Supervisor of Elections said the day was "boring."