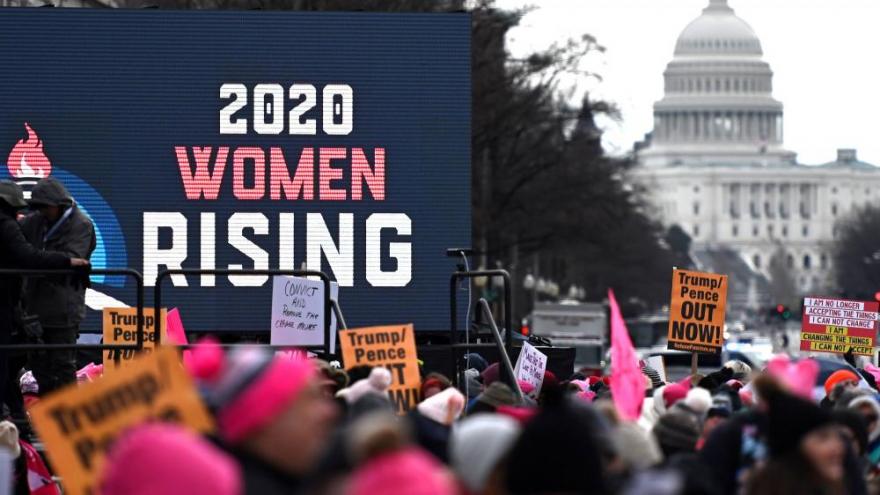 Demonstrators gather on Saturday, January 18, for the fourth annual Women's March in Washington.

(CNN) -- Donning their iconic pink knit pussyhats, women and their allies are gathering Saturday across the United States for the fourth annual Women's March.

In Washington, where the main event is being held, participants -- many toting tough-worded signs -- gathered in Freedom Plaza and planned to march around the White House in a symbolic blitz of President Donald Trump, whose election and inauguration prompted the first Women's March in January 2017.

"We are so angry and channeling that rage into empowering our communities, into coming out and engaging our communities in a powerful way so that this administration can come to an end," Isa Noyola, a Women's March board member, told CNN.

"Our communities," she said, "our powerful women deserve so much more."

In New York, marchers gathered in Columbus Circle and listened to speeches and performers who echoed the Women's March organization's broad swath of principles, like protecting reproductive rights, LGBTQIA rights, immigrant rights and environmental justice, among others.

Among the speakers there was Evelyn Yang, the wife of presidential candidate Andrew Yang. Yang this week told CNN she was sexually assaulted by her OB-GYN while she was pregnant with their first child.

"You might have heard that I'm standing here today also as a survivor of sexual assault," she told the crowd. "There are far too many of us."

Yang described discovering that other women had also been assaulted and the doctor got a plea deal that allowed him to register as the lowest-level sex offender. The doctor's attorney has denied Yang's allegations in legal filings.

"I wish I could say this was an isolated case, a freak example of injustice, but unfortunately it is not," she said. "Far too many women in our society are harmed and hurt and then betrayed and betrayed again by the institutions that are meant to protect us."

Marches were held in other cities, too, like in Syracuse, New York, where Melanie Nappa participated. She told CNN that she was at the march in part because of her daughters, one of whom will be able to vote for the first time this year. They carried signs with messages like, "Public cervix announcement: no uterus, no opinion."

"The Trump administration," Nappa said, "in its attempts to restrict and roll back safeguards for women and marginalized populations requires engagement and social activism."

The Women's March organization has suffered from growing pains since its first show of force in 2017.

Controversy and allegations of anti-Semitism surrounding its founders eventually led to three of them stepping down from the board last year. They had denied the allegations. The Women's March then appointed 17 new leaders to the board.