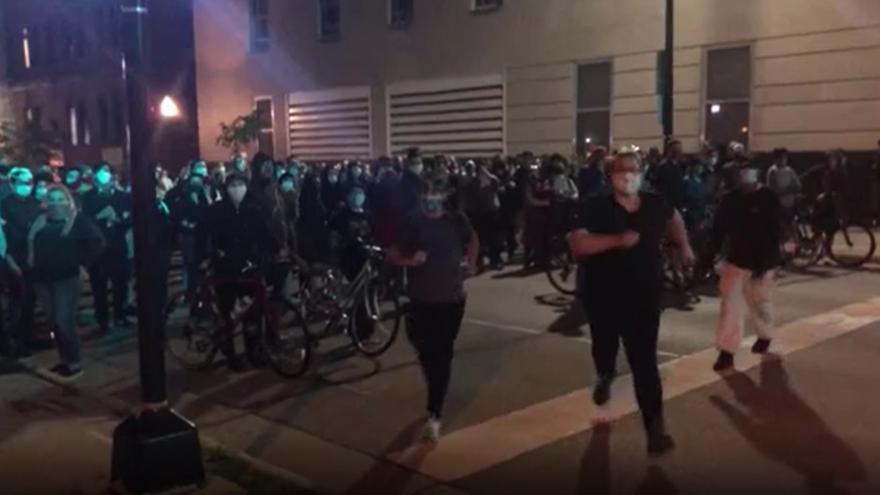 MADISON, Wis. (AP/CBS 58) — Crowds outside the Wisconsin State Capitol tore down two statues and attacked a state senator amid protests following the arrest of a Black man who shouted at restaurant customers through a megaphone while carrying a baseball bat.

Video released by the Madison Police Department shows the man talking through the megaphone Tuesday while walking around the restaurant's outdoor patio. He then goes inside, says he's "disturbing" the restaurant and walks out.

I took this pic- it got me assaulted & beat up. Punched/kicked in the head, neck, ribs. Maybe concussion, socked in left eye is little blurry, sore neck & ribs. 8-10 people attacked me. Innocent people are going to get killed. Capitol locked- stuck in office.Stop violence nowPlz! pic.twitter.com/Zw2hdfYG66

Statues of Wisconsin's motto "Forward" and of Col. Hans Christian Heg were dragged away. The unrest followed weeks of mostly peaceful protests of the death of George Floyd in Minneapolis.

Gov. Tony Evers released the following statement regarding the protests:

“What happened in Madison last night presented a stark contrast from the peaceful protests we have seen across our state in recent weeks, including significant damage to state property. I want to be clear: violence against any person—whether in the middle of the street in broad daylight, at home trying to sleep, going for a run, or happening upon a protest as was the case last night—is wrong. It should never be tolerated. Any single act of injustice against one person is less justice for all of us, and the people who committed these acts of violence will be held accountable. My thoughts are with Sen. Carpenter who was among the individuals attacked last night and wish him a quick recovery.

We also cannot allow ourselves to forget the reason why these protests began: because of the murder of George Floyd, of Breonna Taylor, of the many Black lives taken before them, and because racism and structural inequality still pervade this country. Our cause and our purpose must continue to be the pursuit of the promise of an equitable, just, and fair state and country, and we cannot delay delivering on these promises any longer.

We are assessing the damage to state property, including the State Capitol building, the surrounding area, and the Tommy G. Thompson Center. Both “Forward” and Col. Hans Christian Heg statues have been recovered. The Capitol Police Department responded to attempts to breach the State Capitol and were able to prevent additional penetration of the building. Additional resources from the Wisconsin State Patrol were also dispatched to provide support to the Madison Police Department.
We are prepared to activate the Wisconsin National Guard to protect state buildings and infrastructure and are continuing to work with local law enforcement to understand their response to last night’s events and their plan to respond to similar events in the future.”