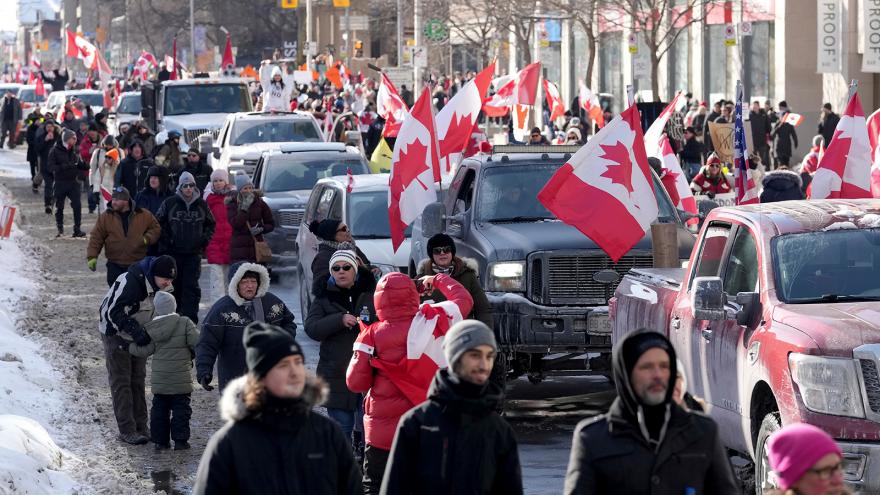 (CNN) -- From the western province of Alberta, moving east to Quebec City, and in cities and towns in between, thousands of Canadians have hit the streets in trucks, tractors, cars and on foot to protest the nation's Covid-19 restrictions.

With persistent and noisy horn honking, protesters are demanding governments at all levels lift their health restrictions, including vaccine and mask mandates, lockdowns and restrictions on businesses and gatherings.

"The whole event has gone beyond just vaccines and it is now about the entire ordeal," protester James MacDonald told CNN, adding he's been in Ottawa since last weekend and has no intention of leaving until health measures are dropped.

The "Freedom Convoy" was initially started by truckers protesting a recent mandate requiring drivers entering Canada to be fully vaccinated or face testing and quarantine requirements. But others have joined the cause. Demonstrators reached Ottawa, Canada's capital, last weekend, and its organizers said the protests will linger there and elsewhere if necessary.

Ottawa's police chief called it a "nationwide insurrection driven by madness," claiming his city was under siege and would need more reinforcements beyond those it had already received from other police forces.

"We do not have sufficient resources to adequately and effectively address this situation while adequately, effectively providing policing in this city," Ottawa Police Chief Peter Sloly warned during a police services meeting Saturday.

While mostly nonviolent, the protests have been noisy and chaotic, and some residents, especially in Ottawa, said they feel like they're being held hostage by demonstrators.

"I understand the police force does not want to directly intervene for fear of violence," Ottawa resident Jack Krentz told CNN this week, "but it feels like we've been left alone a little bit."

Ottawa police said they have responded to more than 400 calls for service related to the demonstrations since they began last week. At least 50 criminal investigations are underway, including 11 involving potential hate crimes.

A Manitoba man was arrested after allegedly driving a vehicle into a crowded protest and striking four people in Winnipeg on Friday night, according to a statement from the Winnipeg Police Department.

David Alexander Zegarac, 42, drove through a group of people gathered at Winnipeg's Legislative grounds as part of the "Freedom Convoy," police said.

After allegedly striking the four people with his Jeep Patriot, the suspect fled "at high speeds and passing through red lights," police said. He was subsequently arrested after a brief struggle with law enforcement, police said.

Zegarac faces 11 charges connected to the incident, including assault with a weapon, dangerous operation of a conveyance, and failure to stop after an accident, authorities said.

Three of the people struck by the man sustained minor injuries which did not require medical attention, and the fourth individual was treated and released from an area hospital, according to Winnipeg Police.

In Vancouver, five people were arrested Saturday for allegedly adding to the general havoc as police received reports of "rocks and eggs being thrown, cars being kicked, and nails being strewn on roadways," police said. Several hundred vehicles traveled through the city en route to the demonstration, Vancouver Police said.

The five people were taken to jail and have since been released from custody, police said.

One of them, a 29-year-old US citizen from Washington state, was arrested after officers saw him wearing a balaclava and pulling a wagon full of egg cartons. The man had a knife in a sheath tied to his belt, and two eggs in his jacket pocket, police said.

"Everyone has the right to peacefully assemble and express their views, and the Vancouver Police Department is committed to providing a safe environment for lawful protest," said police Sgt. Steve Addison. "Today's protests attracted thousands of people who feel passionately about their causes. While most protesters were peaceful, some had to be arrested for violent behavior and unlawful conduct."

In Toronto, Canada's largest city, thousands took to the streets Saturday. And despite the efforts of Toronto police, several trucks blocked a major intersection for hours.

Police reported problems clearing the way for emergency vehicles close to the protest, warning again in a statement this was "unacceptable and will not be tolerated."

Quebec City similarly reported thousands of protesters and hundreds of trucks clogging streets while residents and visitors tried to enjoy a winter carnival.

While the protests were started by truckers, those who have joined them and donated money include many who said they are vaccinated and have so far complied with public health measures.

"We're asking for freedom, that's all," said one couple who joined the protest in Ottawa this week.