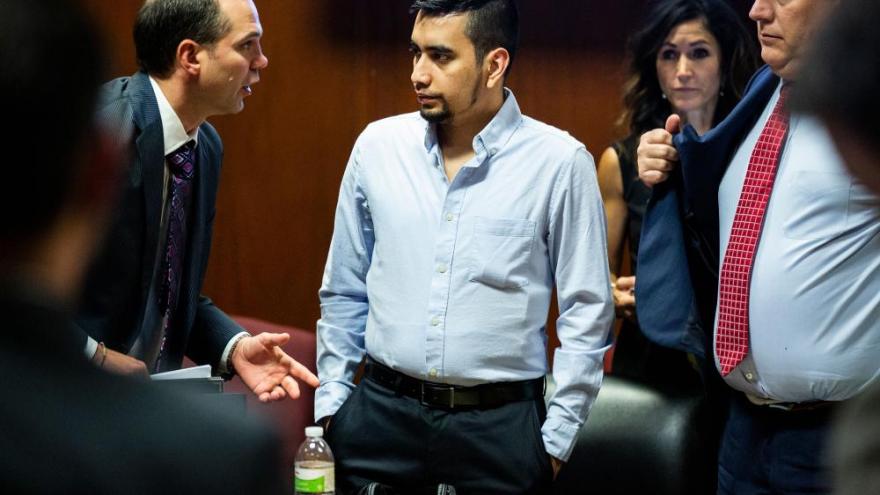 Cristhian Bahena Rivera, pictured here on May 26, has been sentenced to life in prison with no eligibility for parole for first-degree murder in the abduction and fatal stabbing of college student Mollie Tibbetts in July 2018.

(CNN) -- A farm worker has been sentenced to life in prison with no eligibility for parole for first-degree murder in the abduction and fatal stabbing of college student Mollie Tibbetts in July 2018.

The sentencing comes just over three years after the body of the 20-year-old woman was found in an Iowa cornfield.

Cristhian Bahena Rivera, a 27-year-old undocumented immigrant from Mexico, admitted in an August 2018 interview with police that he followed Tibbetts while she was out for an evening run, got angry at her and "blacked out," according to an arrest affidavit and testimony at trial. He said he later came to and realized she was bleeding in his vehicle's trunk and he then buried her in a remote Iowa cornfield, prosecutors said.

Rivera then led police to the cornfield, where investigators found her body with fatal stab wounds, prosecutors said.

"Mr. Rivera, I selected this particular sentence for you after considering the nature of the offense committed by you, the harm to the victim and the victim's family, your need for rehabilitation and the necessity for protecting the community from further offenses by you and others," Judge Joel Yates said at the sentencing.

After Rivera was found guilty, prosecutor Scott Brown said the Tibbetts family was "relieved" and "pleased" with the decision.

"The family, and other people that are that close to it, they live with it forever," Brown said of the tragedy. "We hope that in the end ... when these cases are over, we can bring a sense of justice to them, even though we would never have the ability to bring Mollie back."

Tibbetts disappeared after a run

Tibbetts disappeared after a run in Brooklyn, Iowa, sparking an extensive search that drew national attention.

She had been studying psychology at the University of Iowa and wanted to get a doctorate and write books, her father said. Rivera, meanwhile, had worked for four years at Yarrabee Farms, a nearby dairy farm.

The prosecution based its case on three key aspects: surveillance video of Rivera's vehicle near Tibbetts, his admissions to investigators in August 2018 and her DNA found in his trunk.

After more than a month of searching for her, the break in the case came when home surveillance video surfaced from the night of July 18, 2018, showing the silhouette of a woman running -- as well as repeated sightings of a black Chevy Malibu, prosecutors said. An investigator later spotted the vehicle and identified the driver as Rivera, Klaver said.

Although Rivera did not explicitly tell investigators he stabbed Tibbetts, prosecutors said that was the only conclusion.

Rivera's testimony in his own defense sharply contradicted his earlier admissions, though.

Rivera testified that he was told to stop, while the man with the knife exited the car. He said both men then got out of the vehicle and he heard them opening and closing the trunk. When the men left, he said he found Tibbetts' body in the trunk of the car. He said he took her body out of the trunk, placed her in a corn field and covered her body with corn stalks.

Rivera said he didn't know why the men sought his help. He testified that he falsely confessed to police because he feared the men would harm his daughter and ex-girlfriend and because he thought telling investigators what they wanted to hear would help him.