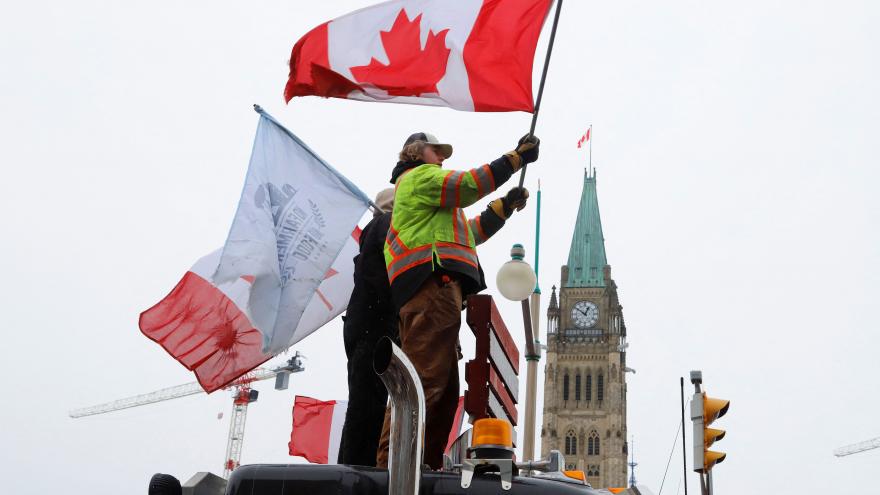 (CNN) -- Canadian protests over Covid-19 regulations are stretching into a second week of blocked roads and boisterous demonstrations, with claims of hate-related incidents under investigation and arrests made amid reports of rocks and eggs thrown.

Sparked by a group of truckers who drove into the heart of Ottawa on January 29 to protest new coronavirus vaccine and testing rules, other protests sprouted over the weekend in major cities across the nation, including Vancouver, Winnipeg, Toronto and Quebec City.

Ottawa Mayor Jim Watson declared a state of emergency Sunday afternoon as the capital city has become a focal point of the "Freedom Convoy" protests. Most of the more than 60 criminal investigations underway in Ottawa involve hate crimes, property damage, thefts and mischief, police there said.

"Declaring a state of emergency reflects the serious danger and threat to the safety and security of residents posed by the ongoing demonstrations and highlights the need for support from other jurisdictions and levels of government," Watson said in a statement.

At least seven arrests were made Sunday and at least 450 citations issued since Saturday morning, the Ottawa Police Service said. Demonstrators "exhibited extremely disruptive and unlawful behaviour," police said in a statement, which created "risks to public safety and unacceptable distress" for residents.

While mostly acting peacefully to voice their disapproval of recent vaccine mandates, demonstrators' tactics of idling trucks and blocking motorways have become a greater nuisance with each passing day for residents and businesses.

The majority of businesses in downtown Ottawa have been closed for more than a week or have been operating with reduced hours, and owners are complaining to city officials of financial difficulties as customers dwindle.

Still, some attendees of the protests say they're not going anywhere until changes are made.

"The whole event has gone beyond just vaccines, and it is now about the entire ordeal," protester James MacDonald told CNN, adding he's been in Ottawa since last weekend and has no plan to leave until health measures are dropped.

The demonstrations began as an objection to a recent vaccine mandate requiring truckers entering Canada to either be fully vaccinated or face testing and quarantine requirements. Other protesters have joined to rail against mask mandates, lockdowns, restrictions on gatherings and other Covid-19 preventative efforts.

Canada has one of the highest vaccination rates in the world, with about 4 in every 5 Canadians fully vaccinated, according to data from Johns Hopkins University.

Police have responded to more than 650 calls for service in relation to the demonstrations since they began, they said Sunday.

The city's hate-motivated crime hotline -- established after reports of anti-Semitic, racist and homophobic acts at the Covid-19 protests -- has also gotten more than 200 calls, according to police.

Road closures and barricades remained in place Sunday morning across much of Ottawa, especially in the city's downtown core, according to police, who have repeatedly advised demonstrators to "not enter Ottawa, and go home."

Police issued hundreds of notices over the weekend, including for excessive honking, driving the wrong way or on a sidewalk, not wearing a seat belt, having alcohol readily available and having the improper class of driving license, they said.

Vehicles and fuel have been seized, police said, and they are advising "anyone found bringing fuel to the demonstration trucks in red zone could be subject to arrest and charges."

A weekend of arrests and protests

In Vancouver, several hundred vehicles traveled through the city en route to demonstration there, Vancouver Police said. Five people were arrested Saturday amid reports of "rocks and eggs being thrown, cars being kicked, and nails being strewn on roadways," police said. The five were taken to jail and released, police said.

Among them was a 29-year-old US citizen from Washington state who was arrested after officers saw him wearing a balaclava and pulling a wagon full of egg cartons, police said. The man had a knife in a sheath tied to his belt, and two eggs in his jacket pocket, they said.

"Everyone has the right to peacefully assemble and express their views, and the Vancouver Police Department is committed to providing a safe environment for lawful protest," said police Sgt. Steve Addison. "Today's protests attracted thousands of people who feel passionately about their causes. While most protesters were peaceful, some had to be arrested for violent behavior and unlawful conduct."

In Toronto, Canada's largest city, thousands took to the streets Saturday. And despite the efforts of Toronto police, several trucks blocked a major intersection for hours. Police reported problems clearing the way for emergency vehicles near the protest, warning again in a statement this was "unacceptable and will not be tolerated."

Quebec City similarly reported thousands of protesters and hundreds of trucks clogging streets while residents and visitors tried to enjoy a winter carnival.

In Winnipeg, a demonstration Friday night turned dangerous when a man drove into a crowd, hitting four people, according to the Winnipeg Police Department. Three of those hit didn't require medical attention and the fourth was treated and released from an area hospital, police said.

The suspect, who was arrested after a brief struggle with law enforcement, faces 11 charges, including assault with a weapon, dangerous operation of a conveyance and failure to stop after an accident, authorities said.