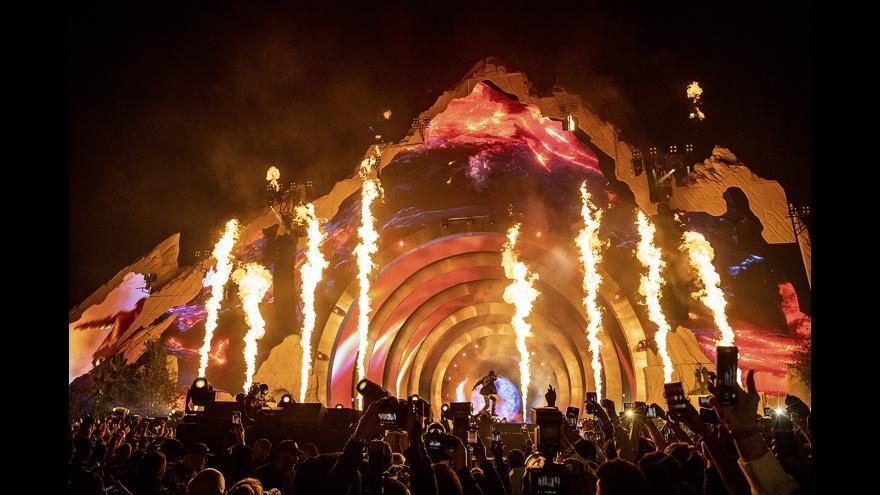 (CNN) -- Police are in the early stages of a criminal investigation after a crowd surge at a Houston music festival on Friday left eight people dead and scores more injured, with at least two fighting for their lives in critical condition.

Houston Mayor Sylvester Turner said authorities were working to determine the circumstances behind the crush at the Astroworld Festival, and told CNN's Pamela Brown Sunday the city's thoughts are with those who were killed or injured.

Rapper Travis Scott, who headlined and organized the festival, was due to perform shortly after 9 p.m. Friday when thousands of attendees rushed forward, getting closer to the stage.

"The crowd for whatever reason began to push and surge towards the front of the stage, which caused the people in the front to be compressed -- they were unable to escape that situation," Houston Fire Chief Sam Peña told CNN.

As Scott performed, the situation worsened as concertgoers near the front were trapped. Witnesses told CNN of harrowing scenes of people crushed or trampled as calls for help were drowned out by the music.

An ambulance soon made its way into the crowd to assist, as staff and first responders worked to respond to the unfolding tragedy. Scott stopped the show at least three times to ask for help for stricken concertgoers, audience members Nick Johnson and Angel Rodriguez told CNN.

Eight people ranging in age from 14 to 27 died from the surge, officials said. Hundreds were injured -- many of whom were treated at a field hospital near the event -- and Turner said 13 people were hospitalized as of Saturday.

The Houston Police Department said Sunday the investigation is "very active and is in its early stages," and department services remained available to those seeking information on loved ones who were in attendance.

"There's a criminal investigation underway at this point in time," Turner told CNN, stating he and his team met Sunday morning to begin "a detailed review of everything that has taken place. It will take probably weeks if not longer, and I'm sure that what took place will be looked at from many different angles, as well as it should be."

More than 500 Houston police officers were at the event as well as more than 700 private security personnel, Turner said, calling it a substantial increase from prior iterations of the festival.

Houston Police Chief Troy Finner visited Scott before his set to express "concerns about the energy in the crowd," according to reporting from The New York Times citing a source familiar with the chief's account.

CNN has reached out to Houston police and representatives for Travis Scott for comment on The New York Times report.

In 2019, three people were trampled and injured as patrons rushed in to the venue. The event was first held in 2018.

Manuel Souza "suffered serious bodily injuries when the uncontrolled crowd at the concert knocked him to the ground and trampled him," the lawsuit said, which CNN obtained from the law firm Kherkher Garcia representing Souza.

"Defendants failed to properly plan and conduct the concert in a safe manner. Instead, they consciously ignored the extreme risks of harm to concertgoers, and, in some cases actively encouraged and fomented dangerous behaviors," the lawsuit said.

"We will be investigating this tragedy over the next few days and hope to shed light on what happened and provide answers to victims and the families of those victims. No one should ever attend a concert in fear. This must stop," according to a statement from Kherkher Garcia.

In a video posted on Instagram Saturday night, Scott said, "I'm honestly just devastated," and added "we're actually working right now to identify the families so we can help assist them through this tough time."

CNN has reached out to Scott, Live Nation and Scoremore for comment on the lawsuit.

Kylie Jenner, who shares a 3-year-old daughter with rapper Travis Scott, said neither she nor Scott were aware of the Astroworld fatalities during Friday's concert.

"I want to make it clear we weren't aware of any fatalities until the news came out after the show and in no world would have continued filming or performing," Jenner said in an Instagram post. "I am sending my deepest condolences to all the families during this difficult time and will be praying for the healing of everyone who has been impacted."

Victims continue to be identified

As the investigation into what happened Friday night continues, family and friends are mourning those lost, including high school and college students as well as a man trying to save his fiancée from greater harm.

Among those identified who were killed in the surge include: John Hilgert, 14; Brianna Rodriguez, 16; Jacob Jurinek, 20; Franco Patino, 21; Rodolfo Peña, 23; and Danish Baig, 27.

The identity of one of the victims who previously had been unknown by authorities has been determined, Turner told CNN Sunday.

The Harris County Institute of Forensic Sciences released a statement asking for assistance in identifying a man in his early 20s with "short black or dark brown wavy hair" and "a slight mustache with a noticeable goatee."

The man was just over 6 feet tall, weighed about 500 pounds, and was wearing size 11 Nike sneakers, the statement said.

"That person has been identified, and contact has been made with his family," Turner said.

Rapper Roddy Ricch, one of the festival's performers, announced he will donate his share of concert proceeds to families of the victims.

"Please have the families of those we lost yesterday reach out to @shawnholiday. I'll be donating my net compensation to the families of this incident," Ricch posted on Instagram, sharing the hashtag "Pray4Houston."

Astroworld Festival organizers canceled Saturday's show after the surge and said in a statement, "Our hearts are with the Astroworld Festival family tonight -- especially those we lost and their loved ones. We are focused on supporting local officials however we can."