Crews were dredging the river. Instead of muck, they pulled up three cannons and a mystery 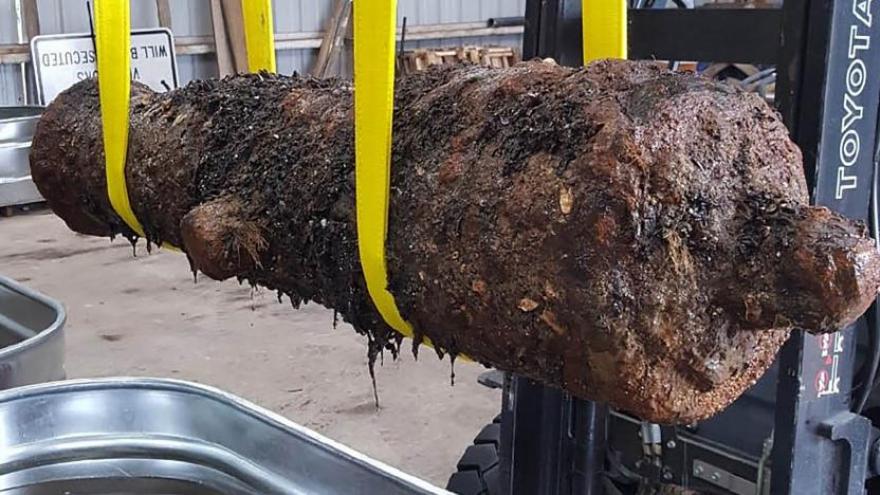 Three recovered cannons, one of which is seen here, are believed to be from the 18th century.

(CNN) -- Dredging the Savannah River is like a box of chocolates, say those who head up the task.

You never know what you're gonna find.

How about three cannons that may date to the American Revolution, an anchor and a likely piece of ship's timber?

The Army Corps of Engineers halted work in the vicinity after the late February discovery east of the Georgia city's famous River Street. Then it sent out feelers to maritime experts, historians and those who have worked on wreck sites in the river, asking for their insight into the finds.

Perhaps the cannons were tossed overboard or they served as ballast. Maybe the old artillery pieces are related to a Civil War ironclad, which was scuttled by its Confederate crew. The Corps doubts that theory.

Archaeologists and Britain's Royal Navy are offering an even more intriguing and exciting possibility.

They told CNN last week that -- based on measurements and appearance -- the cannons may be from the HMS Rose, a famed British warship that mixed it up with colonists during the revolution or, as the UK calls it, the War of Independence. Nearly 250 years ago, the British scuttled the ship in the Savannah River to block the channel and prevent French ships from coming to the aid of colonists trying to retake the city.

Research, diving and sonar scans of the site will be conducted before anyone knows for sure -- if certainty is even possible -- the origin and context of the artifacts. For now, there's a mixture of caution about jumping to conclusions and tantalizing possibilities.

"It could (tell) a part of the story of Savannah that has not been looked at in a very long time," Corps district archaeologist Andrea Farmer said of the discovery.

So why were British troops in Savannah?

A short refresher course might be in order to answer that question.

The 13 colonies, determined to gain their independence, fought the forces of King George III on land and sea. The British, hoping they would gain support from royalists in the South, took Savannah in 1778, only to find themselves defending it less than a year later.

The HMS Rose, with its 20 cannons and 160 sailors, was brought in to help fellow Redcoats.

The warship was already famous, having been a "scourge" on the colonists, as the Royal Navy puts it. It quelled smuggling in Rhode Island, prompting the formation of the forerunner of the US Navy.

The Rose fought in and patrolled New York waterways and parts of the Eastern Seaboard before it sojourned south.

In Savannah, the vessel was sacrificed September 19, 1779, to keep French allies from joining the siege at that point in the river. The British eventually won the battle and controlled the city until almost war's end.

The cannons appear to date to possibly the mid-1700s -- predating the Civil War by about a century -- which aligns closely with the HMS Rose's history. They are about 5 feet long. Further study and the removal of sediment on the cannons may provide information on when and where they were manufactured.

"We are looking at whether they came from a single context, or if the anchor came from a later ship," Farmer told CNN.

Archaeologists and historians believe the HMS Rose may have been partially salvaged at some point after its sinking.

That poses another of myriad mysteries surrounding the recovery of the artifacts: Are the remnants of the HMS Rose on the river bed, in some shape or form? Officials said that will be part of their work in the months ahead.

"I think it's fantastic and interesting when artifacts from maritime history come to light," said Cmdr. Jim Morley, the UK's assistant naval attache in Washington. "It just gives us an opportunity to look back at our common maritime history and history in general."

A busy and 'dynamic' river

During the multiagency harbor expansion project, the Army Corps of Engineers has long contended with challenges presented by the Savannah River, which is swift, has shifting currents and features practically no visibility.

"This stretch of the river can be a dynamic river," Farmer, the archaeologist, said of the heavily traveled channel. "We never quite know. Materials can shift and move."

There's a good bit of material that lies beneath the surface, from Native American pottery that was pushed downstream, to a small amount of debris from the CSS Georgia ironclad that sank in 1864 and other vessels lost over time.

So-called clamshell dredgers designed to pull up muck encountered the artifacts during the week of February 22, the Corps said. The project is in the final stages of deepening the Savannah harbor from 42 feet to 47 feet to make sure supertankers have room to navigate, said Corps spokesperson Billy Birdwell.

"Studies demonstrate the deepening will produce substantial economic benefits for the nation by enabling larger and more heavily loaded vessels to call on the harbor with fewer tidal delays," the Corps office says.

'You have to do the detective work'

Officials with the Naval History and Heritage Command said there's not enough early evidence to suggest which vessel carried the discoveries.

The Corps, using US Navy divers and contractors, removed most of CSS Georgia's remains a few years ago as part of the harbor deepening. Several cannons were pulled up and conserved.

The newly found artillery pieces were recovered outside the area where the Corps would have anticipated more CSS Georgia artifacts, though they were in the general vicinity, it said. Robert Neyland, head of the underwater archaeology branch at the NHHC, said it's possible the Rebel ironclad had these older guns onboard.

"I think it is a significant find," said Neyland, whose office has been in touch with the Corps. "Future investigation will tell us just how significant it is."

Farmer said the district is in the process of bringing on experts who will look at historic and cartographic material. It will use divers, side-scan sonars and magnetometry in the area where the artifacts were found. The Corps also will turn to artillery experts to go over the evidence.

She and others say it is important to look at all options regarding their origin.

"You have to do the detective work to solve the mystery," said Neyland. "We are not going to find a name on it. You have to build a body of evidence."

Discovery will bring research from across the sea

The Army Corps of Engineers has not detailed the precise area where the artifacts were found, wishing to discourage treasure hunters. And, it says, diving in the area is extremely hazardous.

As for the artifacts themselves, the Corps will require the assistance of outside experts, as it did with the CSS Georgia, for conservation.

Statements distributed by the British Embassy and a Royal Navy news article say the artifacts likely date to the siege of Savannah. A postscript on the HMS Rose: A replica built in 1970 was modified to become the HMS Surprise, which is featured in the Russell Crowe film "Master and Commander." The replica is now at the the Maritime Museum of San Diego.

While the American colonies and the crown were bitter enemies 250 years ago, the United States and the United Kingdom have long been strong allies.

Morley, the British Embassy assistant naval attache, said the find in Savannah provides an opportunity "to work together and further our knowledge."