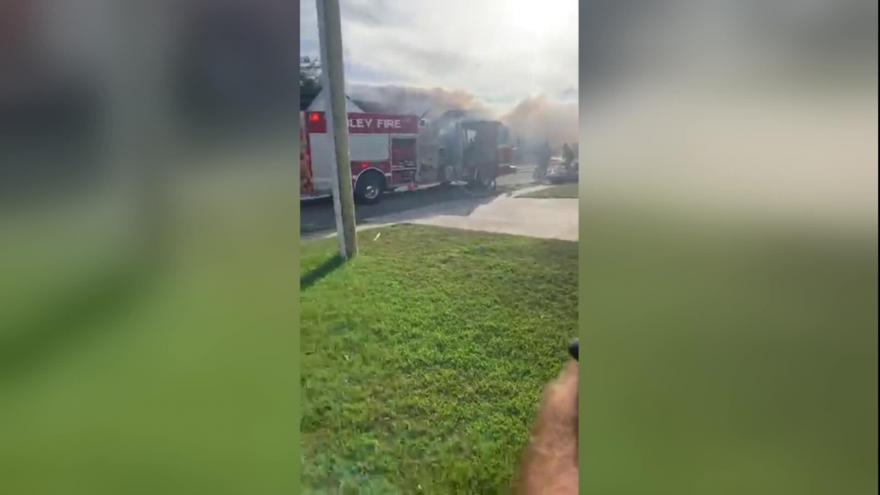 A neighbor captured the scene of heavy smoke filling the sky moments after a US Naval aircraft crashed in Magnolia Springs, Alabama on Friday evening.

(CNN) -- The crew of a Navy T-6B Texan II was killed Friday when the two-seat airplane crashed in a small town near Mobile, Alabama, according to the Navy.

The turboprop aircraft crashed in Foley, which is about 30 miles by air from Mobile, at about 5 p.m. CT, said Cmdr. Zach Harrell, a public affairs officer with Naval Air Forces.

Harrell said the names of the deceased would be released after relatives have been notified. The plane is typically occupied by a student pilot and an instructor.

"It is with a heavy heart that we mourn two of our pilots who lost their lives during an aircraft crash in Alabama today," the Chief of Naval Air Training said in a Twitter post. "Our deepest sympathy goes to their family and friends at this difficult time. Rest in peace, Shipmates. We have the watch."

The Navy is not aware of any civilian casualties, Harrell said.

A home caught fire after the plane crashed but the Baldwin County Sheriff's Office also said no one on the ground was injured.

The T-6B Texan II is a tandem-seat, turboprop aircraft primarily used to train Navy and Marine Corps pilots, according to the Navy.

NAS Whiting Field is "where the future of Naval Aviation begins," its web page says. About 1,200 new pilots go through training there each year.

The airfield is about 45 miles from the crash site.

CNN reached out to the Federal Aviation Administration, which had no further comment.