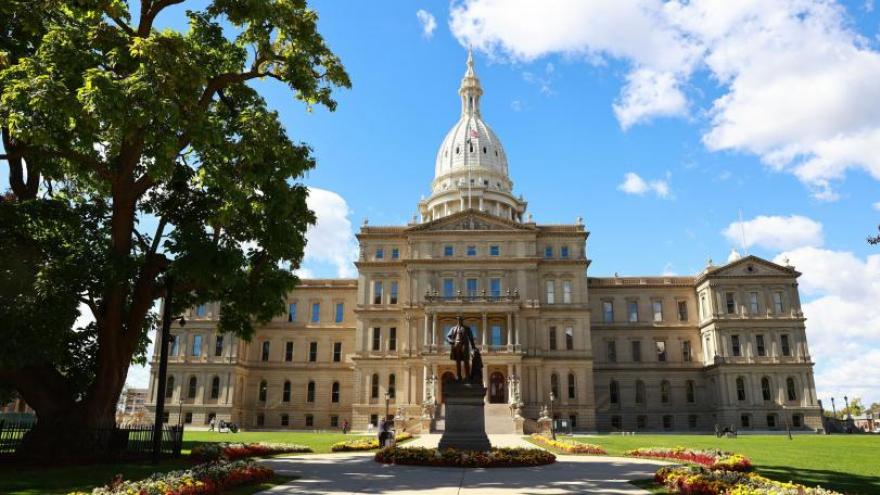 The Michigan State Capitol building is seen on October 8, 2020 in Lansing, Michigan.

(CNN) -- "Credible threats of violence" have prompted Michigan authorities to close the state capitol to the public and shutter House and Senate offices, a spokeswoman said, on the day the Electoral College will formally declare Joe Biden the President-elect.

The tension surrounding Monday's procedure -- a typically routine event affirming a presidential victory -- was underscored in an interview with a GOP state lawmaker who floated the possibility of violence at the capitol and was swiftly stripped of his committee assignments by the legislature's Republican leaders.

"The decision was not made because of anticipated protests, but was made based on credible threats of violence," Amber McCann, the deputy chief of staff and spokeswoman for Republican Senate Majority Leader Mike Shirkey, said in a statement.

Gideon D'Assandro, the communications director for state GOP House Speaker Lee Chatfield, also told CNN Sunday evening that the offices would be closed. He didn't elaborate on the security concern, but said the House and legislative bodies were informed about it by the Michigan State Police, which declined to comment on the matter to CNN.

"Only those needed for the Electoral College will be permitted in the Capitol Building," says the email, a copy of which was shared with CNN by D'Assandro.

The Electoral College meeting will be streamed via Senate TV, McCann said.

Monday morning, Chatfield and Speaker-Elect Jason Wentworth announced that state Rep. Gary Eisen, a Republican, had been stripped of his assignments following remarks in a WPHM radio interview in which he said he was helping coordinate protests and could not assure that there would not be violence.

Eisen, who supported the failed Texas lawsuit that sought to overturn the election results, did not give details about who was organizing the protests but said he was warned "it's going to be violence, it's going to be protests."

"We have been consistent in our position on issues of violence and intimidation in politics -- it is never appropriate and never acceptable," Chatfield and Wentworth said in a statement. "That is true of threats or suggestions of violence against Gov. Whitmer, Secretary Benson, Rep. Johnson and others on the Oversight committee, Republicans, Democrats, and members of the Electoral College. That applies to threats made toward public officials, and it must also apply when the public officials open the door to violent behavior and refuse to condemn it. We must do better."

Other states are also increasing security protocols due to concerns over safety, threats and protests.

Electors in Pennsylvania told CNN they are getting a law enforcement escort, in groups, to the venue where the vote will be held and then back to their hotels and other locations. In Arizona, the Electoral College will meet at an undisclosed location, according to the public information office for the secretary of state. And electors in Wisconsin are being told to use an unmarked entrance with police escort, according to one of the electors.

The Electoral College count has gained a new significance this year amid unprecedented pressure from President Donald Trump and several Republican allies who have sought to overturn the election in key battleground states -- including Michigan -- that he lost to Biden.

Michigan, in particular, has been an epicenter of tension this year. In the spring, Democratic Gov. Gretchen Whitmer faced heated pushback over pandemic stay-at-home orders, and protesters, some of whom were armed, stormed the Michigan capitol. And weeks before the election, 13 people were charged in an alleged domestic terrorism plot to kidnap Whitmer.

Whitmer and other state Democratic officials have at times blamed Trump for provoking tensions, with the governor writing in an Atlantic op-ed that every time the President attacks her on Twitter, there is a "surge of vicious attacks" and that he is putting women leaders "at risk."