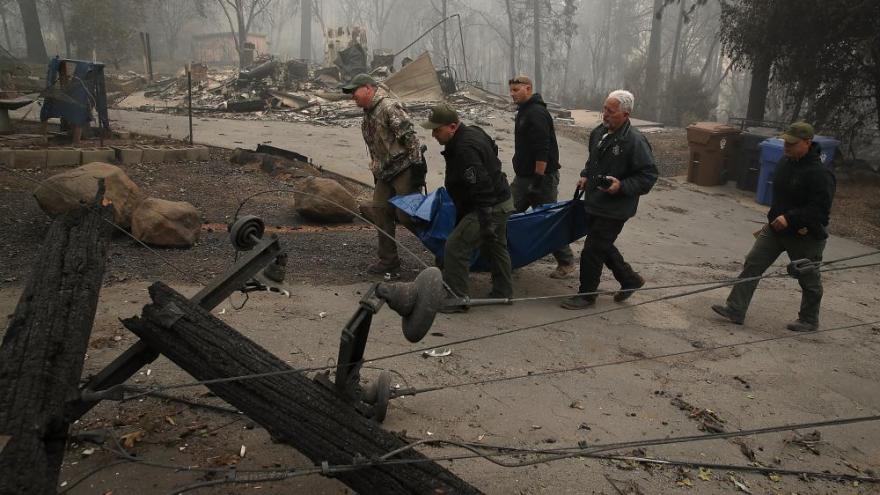 Yuba and Butte County sherriff deputies carry a body bag with a deceased victim of the Camp Fire on November 10, 2018 in Paradise, California.

(CNN) -- One picture showed a dead cat with a beer bottle in its mouth.

In another, a man is jumping through a burned trampoline.

And then there's the one where two men pretend to go for a drive in the charred remains of a motor home.

The photos are among several taken by employees of a crane rental and sales company who were working at sites ravaged by the Camp Fire. California-based Bigge Crane and Rigging Co. said Saturday it has terminated three employees after the offensive photos surfaced on Facebook.

The Camp Fire began November 8 and burned through more than 153,000 acres in Butte County, killing at least 86 people and destroying nearly 14,000 structures. It was contained November 25 after becoming the deadliest and most destructive wildfire in California history.

The Town of Paradise posted the photos Saturday saying it was "unacceptable and reprehensible behavior."

"Town leadership has contacted this subject's employer and he will no longer be working in our Town. The Paradise Police Department is looking into criminal charges. #NotInMyTown #ParadiseStrong #RidgeRecovers," the post read.

The Paradise Police Department did not respond to CNN's request for comment.

Bigge Crane and Rigging Co. identified one of the former employees by name in a Facebook post of their own Saturday, but did not identify the two others.

"Bigge Crane and Rigging Co. regrets the insensitive and reprehensible actions of Mr. Rob Freestone," one post read. "Mr. Freestone has been removed from the Camp Fire recovery effort and we are working with International Union of Operating Engineers regarding his actions. Bigge fully supports Paradise and all of Butte County in the effort to recover from the fires and we will continue to do so."

About four hours after the initial post, the company said they "identified three participants in this abhorrent event and their employment has been terminated."

"Bigge expects its employees and contractors to work with the utmost integrity and professionalism. The behavior of these individuals is not consistent with our company values and ethical code," the post read. "Bigge regrets that the residents of Paradise and Butte County have suffered an egregious insult during an already devasting time at the hands of these three individuals."

Cal Fire, the state's forestry and fire protection agency, has said the cause of the Camp Fire is still under investigation.