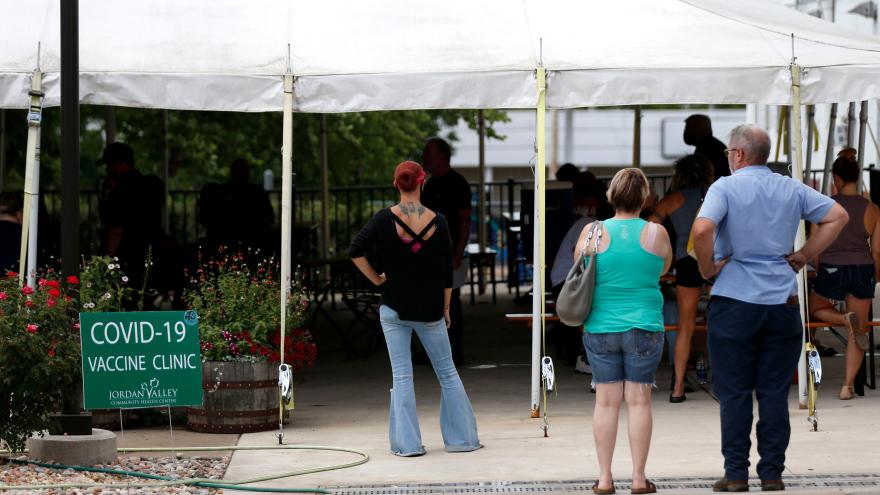 (CNN) -- With Covid-19 cases rising and the Delta variant gaining increased prevalence in the United States, health experts are reiterating that vaccines are effective in the ways that matter most: preventing severe disease, hospitalization and death.

"When you start seeing what's called breakthrough infections, if you look carefully at them, the overwhelming majority of those are people who either have no symptoms or only very mild symptoms," Fauci said. "So the vaccines are still very, very effective in preventing severe disease."

The Delta variant has "pretty much taken over" in the US, said Dr. Paul Offit, director of the Vaccine Education Center at Children's Hospital in Philadelphia and a member of the US Food and Drug Administration's vaccine advisory committee. But it's clear the vaccines work against the Delta variant, too, he said.

Yet the pace of inoculations is slowing, with less than half of the US population -- 48.5%, per the latest data from the US Centers for Disease Control and Prevention -- fully vaccinated. And it's the communities with lower vaccination rates that are at risk.

"If you are unvaccinated, the risk is incredibly high -- and maybe in some areas higher than it's ever been," said Dr. Craig Spencer, director of global health in emergency medicine at Columbia University Medical Center, adding people are acting a "little more carefree and lackadaisical," raising the chance of exposure.

Indeed, the number of people traveling by air set a pandemic-era record Friday, with nearly 2.2 million people screened at US airports, a spokesperson for the Transportation Security Administration said, adding an admonition: "#MaskUp."

In the meantime, vaccinated people should "continue to be smart," but are very unlikely to get sick, be hospitalized or die of Covid-19, Spencer said.

In the US, officials are increasingly focused on increasing vaccination rates among younger people.

"Young people sometimes ... feel that they're invulnerable. They need a little, I would say a gentle push -- not forcing or threatening, but to get them to understand why it's important for their own safety," Fauci, the director of the National Institute of Allergy and Infectious Diseases, told CNN on Saturday. "Because as we're getting more and more infections with the Delta variant ... we're seeing more and more young people who are getting seriously ill."

To that end, Fauci teamed up with 18-year-old pop star Olivia Rodrigo this week, appearing in a video released by the White House that encourages young people to get vaccinated.

"The sooner all of us get vaccinated, the sooner we can, like, hang out with our friends and sing songs and all of the fun things," Rodrigo said.

Alabama health officials Friday announced a TikTok contest aimed at increasing Covid-19 vaccination rates among people between the ages of 13 and 29. Contestants are asked to submit a video that shows them getting vaccinated and a message that shares why they chose to do so. Four winners will be chosen to receive a $250 Visa gift card, officials said.

Darrell Hudson, principal of A.H. Parker High School in Birmingham, Alabama, told CNN school officials don't know how many of their students are vaccinated, and "some are still a little concerned about taking the vaccine and what's in the vaccine." But he said he's hopeful students will get the shot, along with their families, so they can safely return to the classroom August 2.

"We don't want any child coming to our campus, taking the virus back home to parents, to grandparents, to aunties and to their relatives," Hudson said.

As for vaccines for even younger children, studies continue, Fauci told CNN.

"Thus far, things look good, but the final decision is going to be up to the FDA," Fauci said. "And I would imagine that likely will not happen until we get well into the winter, towards the end of this year."

Additionally, Fauci said he "would be astounded" if the Covid-19 vaccine by Pfizer/BioNTech didn't receive full FDA approval for people 16 and older by the end of August (each vaccine available in the US has been authorized for emergency use, but they have yet to be fully approved). The companies announced Friday the FDA had granted priority review designation to their application for approval for their vaccine.

"But even between now and then, people should realize that the data of the efficacy and real-world effectiveness of these vaccines is really extraordinary -- not only in the United States, but in multiple countries throughout the world," Fauci said.

'I don't think we've seen the worst of it'

Local officials continue to sound the alarm about the increase in cases, particularly among those unvaccinated. Twenty states have fully vaccinated more than half of their residents, according to the CDC, but health care facility resources are being stretched in states with fewer vaccinations.

Only a fourth of residents in Mobile County, Alabama, are fully vaccinated, Commissioner Merceria Ludgood said at a news conference Friday. And now the county is seeing a massive increase in hospitalizations, according to Dr. Laura Cepeda, chief medical officer of the Mobile County Health Department, who said there's been a 400% increase in hospitalizations in the past month.

Mayor Sandy Stimpson encouraged those who have gotten the shots to talk with their loved ones and neighbors.

"Today, we have sports heroes, we have rock stars, we have movie stars, coaches encouraging people all across this country to get vaccinated," Stimpson said. "But if you've been vaccinated, don't underestimate your ability to reach out to someone and encourage them to do it. You may be that person to convince them that this is the right thing to do."

Katie Towns, acting director of the Springfield-Greene County Health Department in Missouri, told CNN Friday the department is requesting an alternative care site and staff from the state to address the growing number of Covid-19 cases and hospitalizations, saying, "It's at a level that we've not seen before,"

"Most striking is the demographic and age," she said of Covid-19 patients, "almost all" of whom are unvaccinated. "The illness has really shifted from being an older population ... to being ages 20, 30, 40 years old in the hospital and needing ICU care and oxygen."

And hospitals and health officials are projecting an increase in numbers following the Fourth of July holiday.

"I don't think we've seen the worst of it," Towns said.

The return of mask guidelines

But even in areas with higher rates of vaccination, officials are beginning to reinstitute safety protocols such as mask mandates to try to curb the spread.

Health authorities in the San Francisco Bay Area on Friday announced they are recommending everyone wear masks indoors.

And Los Angeles County will reinstate its indoor mask mandate Saturday night for both vaccinated and unvaccinated people. The county's public health department reported 1,827 new cases Saturday, a fourfold increase in the number of cases reported on July 4.

George Metsos, owner of Patys Restaurant in Los Angeles, told CNN the mask mandates have been confusing, and the changing guidance doesn't help.

Amid growing concern, local authorities "do have the discretion of going that extra mile or going the extra step it takes to make sure that the spread of this virus is really contained," Fauci told NBC's "Nightly News with Lester Holt." "And they do that by saying that everyone should wear a mask."

CORRECTION: An earlier version of this story included incorrect information about the number and percentage of Canadians fully vaccinated for Covid-19.