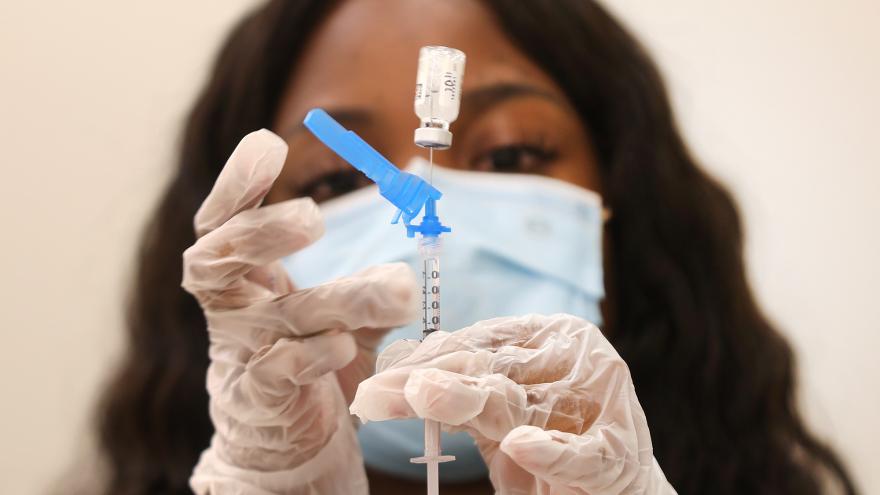 (CNN) -- In the next few weeks, the Biden administration will launch a national vaccine promotional campaign aimed at encouraging hesitant Americans to get immunized, a marketing executive close to the project told CNN.

The advertisements are part of a $250 million Covid-19 education campaign run by the US Department of Health and Human Services, which will include a podcast hosted by "a well-known person" outside of government, the executive said.

In addition to the podcast, Henry Louis Gates Jr., a Harvard professor and host of the PBS series "Finding Your Roots," has narrated an ad about the vaccines for the government campaign, according to the executive and a Biden administration official.

Dr. Marcella Nunez-Smith, the Biden administration's Covid-19 equity task force leader, said on CBS' "Face the Nation" Sunday that the administration is "on the cusp" of launching a national education campaign timed with the increase of vaccine supply.

Asked by CBS' Margaret Brennan about how the White House will convince younger Republicans and non-Biden supporters who are more reluctant to get the vaccine, Nunez- Smith said there would unique messages for different groups within the US.

"We're getting ready to launch that national public education campaign that will work closely with trusted messengers, influencers and others to get to everyone," Nunez-Smith said on "Face the Nation." She would not give a specific date.

Work on the campaign began last fall, but the ads promoting vaccines haven't been released yet because the vaccine is still in short supply, and health officials don't want to create additional demand, a Biden administration official told CNN.

"Once we get to a point where supply starts looking like it might outstrip demand, that's when the vaccine confidence messaging needs to kick in," the official said, adding that "we're getting close" to the right time.

"The trickiest part of this effort from day one has been timing messaging with vaccine supply, and that magic moment is fast approaching," the official said.

With many Americans fighting to get a Covid-19 vaccine -- spending hours online looking for appointments or even dressing like grannies or driving halfway across the country to get a shot -- it's easy to forget that many other Americans aren't so enthusiastic.

"We know that behind the vaccine early acceptors we're seeing now, there lurks a group that is hesitant and reluctant," said Dr. William Schaffner, a longtime adviser to the US Centers for Disease Control and Prevention on vaccines.

A new CNN poll shows that more than 1 in 4 Americans haven't gotten a Covid-19 vaccine and don't intend to get one.

To keep the virus from spreading, about 80% of Americans need to get vaccinated, Schaffner said.

"I hope for the best for this campaign. I hope it's wonderfully effective at reaching people," he added. "They need to use facts, which go to our head, but they also need to reach people's hearts, because it's the heart that makes behavior change."

A campaign without Hollywood glitz

The "vast majority" of the campaign's $250 million budget will be used to buy advertising on television, radio, billboards, and print and digital media, the government official said.

Robert Ehrlich, a former pharmaceutical company executive, said that budget is on par with advertising campaigns for well-known prescription drugs.

"That's a big campaign; $250 million can buy a lot of media," said Ehrlich, who now consults to pharmaceutical companies and is not involved with the government campaign.

HHS started releasing ads in December as part of a "Slow the Spread" campaign to encourage Americans to wear masks, practice social distancing, avoid crowds, and take the vaccine, the marketing executive said.

For the vaccine portion of the campaign, after extensive research and work with focus groups, the advertising executives decided to focus on a particular message to encourage people to get vaccinated for other people.

Dr. Anthony Fauci, President Joe Biden's chief medical adviser, will be used in the campaign, and other government doctors might later be involved.

"Already we're thinking about how we can engage Dr. Walensky and Dr. Nunez-Smith and ... Corbett from NIH. We have so many people who are so interested in her," the executive said.

Dr. Rochelle Walensky is director of the CDC and Kizzmekia Corbett is a researcher at the National Institutes of Health who helped develop Covid-19 vaccines.

The campaign might at some point also include testimonials from people who were hesitant to get the vaccine but then decided to get it, the executive added.

At this point, the campaign will not include any well-known figures aside from Gates and the unnamed podcast host.

"We are not reaching out to celebrities," the Biden administration official said.

Gates said on "The View" last month that he reached out to his friend Dr. Francis Collins, the director of the NIH, offering to help.

Over the decades, other public health campaigns have gone in a different direction and made more use of celebrities.

In 1956, Elvis Presley got a polio vaccine on "The Ed Sullivan Show," and in 2000, "Today" anchor Katie Couric got a colonoscopy on television to bring awareness to colon cancer prevention.

Recently, Elton John and Michael Caine used their star power to encourage Britons to get vaccinated for Covid-19, and in the US, Black celebrities, including gymnast Simone Biles, actress Viola Davis and musician Questlove, are part of a mask campaign by the CDC Foundation.

Former presidents Carter, Clinton, Bush and Obama, and their respective first ladies, are shown in new public service announcements getting vaccinated and urging Americans to take the shot when it's their turn. The ads were produced by the Ad Council and the Covid Collaborative project and are not part of the $250 million HHS campaign.

The marketing executive close to the HHS campaign said while celebrities might be used more extensively at some point, right now that wasn't the right approach.

"There's other more effective ways to try to provide people the information they need so they can make an informed choice," the marketing executive said. "In our research, we rarely, rarely hear people say, 'I'll get the vaccine if this or that celebrity gets it.' "

In formulating the content of the campaign, the marketing experts decided to target those who are "vaccine hesitant" -- not the relatively small group of Americans who are adamantly anti-vaccine, the marketing executive and the government official said.

"We're keeping focused on the folks who are questioning the vaccine," the official said. "There's only so much advertising can do."