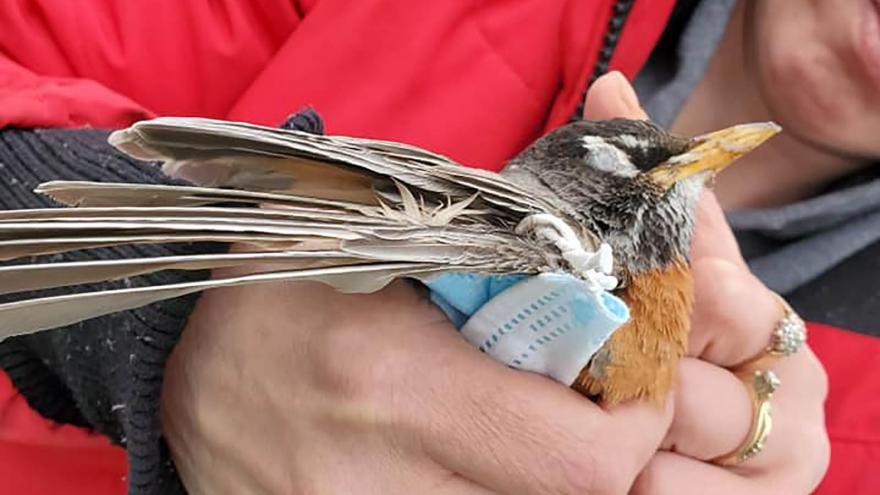 (CNN) -- Waste from lifesaving personal protective equipment (PPE) is killing birds, fish and other wildlife across the globe, a study has found.

Animals are fatally ingesting or becoming entangled in discarded latex gloves and disposable face masks, while others have started building their homes using the same material, researchers said.

"As always with these single-use items, you're not really looking after them and they end up in the environment really soon. They start becoming a real problem," Auke-Florian Hiemstra, a biologist at the Naturalis Biodiversity Center in Leiden and co-author of the report, told CNN Tuesday.

"I think it's ironic that the materials that protect us are so harmful to the animals around us," Hiemstra added.

Scientists found a fish trapped in a medical latex glove in a canal cleanup in the Dutch city of Leiden in August, which prompted researchers to explore whether there was a larger problem.

The biologists found hundreds of discarded face masks in Leiden's historical canals over the course of a few months and soon realized a worrying picture was emerging.

The researchers have so far recorded more than 50 incidences globally where wildlife was harmed, but Hiemstra warned the actual number is likely to be far larger. Those affected are not confined to small fish and birds, Hiemstra said, rather the entire animal kingdom will suffer from Covid-19 litter.

Veterinarians, birdwatchers, and animal rescue centers from across the world reported dogs, monkeys, hedgehogs and even penguins had ingested or entangled themselves in PPE, while birds have been building their nests using face masks, gloves and tissue paper, said the report.

The Covid-19 crisis spurred a rapid expansion in the production of essential plastic products, as governments raced to boost their stockpiles and citizens clamored for their share of supplies.

The UK's Royal Society for the Prevention of Cruelty to Animals (RSPCA) warned in September of wildlife becoming entangled in the ear loops of masks, and urged people to "snip the straps" before they dispose of them. The animal welfare charity issued the plea after a gull was found in Essex with swollen legs after becoming wrapped up in PPE.

"We really encourage people to use reusable face masks," Liselotte Rambonnet, a biologist at the Institute of Biology at Leiden University and co-author of the report, told CNN.

"All the interactions we found were with single-use face masks because they are inexpensive and can be lost more easily," Rambonnet added.

However, even if humans change their behavior now, it may already be too late. An estimated 1.56 billion face masks entered the ocean in 2020, according to a report by OceansAsia, a Hong Kong-based marine conservation organization.

"Even if we take steps tomorrow, then for hundreds of years there will be face masks floating around in the ocean, still impacting our wildlife," said Hiemstra. "I'm afraid it will not stop very soon, and actually the problem will only get worse over time, sadly."

The additional waste from PPE is part of a growing concern for the environment as global plastic production quadrupled over the past four decades, according to a 2019 study. Other studies have estimated that some 8 million tons of plastic trash leak into the ocean annually, with the rate getting worse every year.

The Leiden-based team members hope to expand their research and have set up a database where concerned citizens can share any sightings of animals caught in PPE litter. The research was published last week in the journal Animal Biology.