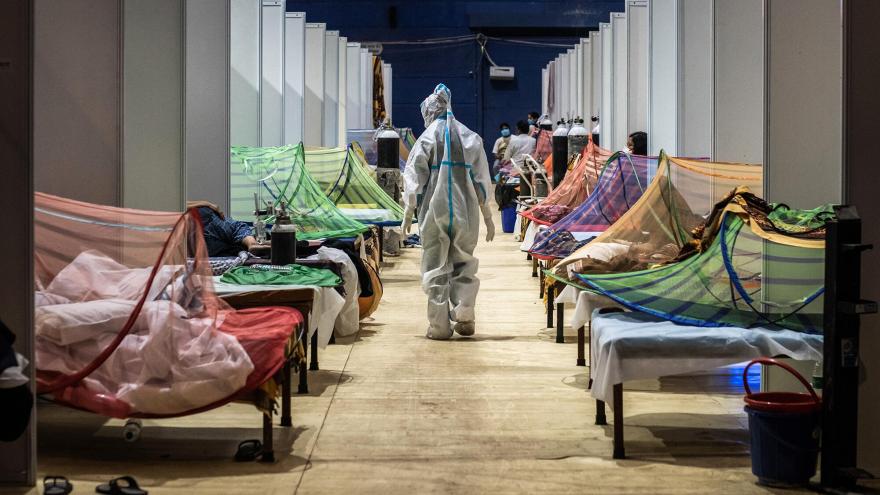 There has been an outbreak of more than 200 cases of coronavirus at the US diplomatic mission in India. This image shows a makeshift Covid-19 care facility in New Delhi on May 02.

(CNN) -- There has been an outbreak of more than 200 cases of coronavirus at the US diplomatic mission in India, a source tells CNN, as the State Department this week authorized non-emergency government employees to depart the country amid a deadly surge of the disease.

In addition to the outbreak of positive cases among the workforce at the diplomatic mission -- which is comprised of the embassy in New Delhi and consulates across India -- CNN has also learned that the State Department had to conduct a medical evacuation from the country.

CNN reported on April 26 that two locally employed staff had died and more than 100 people were infected with coronavirus at the US Mission in India. It is unclear if the increase to over 200 cases developed over the past weeks or where in the country staff have tested positive.

India is in the throes of a deadly second wave of coronavirus, reporting its highest-ever 24-hour surge in Covid-19 cases and a record-high daily death toll on Thursday. Hospitals are facing critical shortages of supplies and oxygen, even as shipments are being sent by governments around the world.

A State Department spokesperson would not confirm the current number of positive cases, citing privacy considerations, but said "the health, safety, and security of US Government personnel and their dependents is the Department's highest priority."

"We are closely monitoring the situation and we will take all necessary measures to safeguard the health and wellbeing of our employees, including offering vaccines to employees," the spokesperson said.

A source previously told CNN that US personnel, family members and locally employed staff in India only began receiving Covid vaccines in mid-April.

The spokesperson said the department made the decision to allow the employees to voluntarily leave the country "because of current conditions associated with the Covid-19 pandemic and diminishing commercial flight options."

They said that employees who wish to return to the United States will do so on commercial flights.

"Authorized Departure status for Mission India will be reviewed in no more than 30 days after the original authorization on April 28," the spokesperson said.

Last week, the Biden administration announced it would restrict entry into the US for foreign nationals who have been in India within the previous 14 days. That restriction does not apply to US citizens, lawful permanent residents or other people with exemptions. The State Department urges American citizens not to travel to India and says those who are there and wish to return to the US should "take advantage of available commercial flights."

Last week, the State Department announced it was dispatching career Amb. Daniel Smith to lead the US Embassy in New Delhi as the new charge d'affaires.

Smith served as acting secretary of state prior to the confirmation of Antony Blinken and led transition efforts at the State Department. The Biden administration has yet to nominate an ambassador to India.

"Ambassador Smith's appointment underscores the United States' strong commitment to our partnership with the Government of India and the Indian people," the State Department said in a media note. "He will spearhead close cooperation with India to ensure that our countries continue to advance our shared priorities, including overcoming the global pandemic."