Covid-19 exposed the devastating consequences of staff shortages in nursing homes. But the problem isn't new 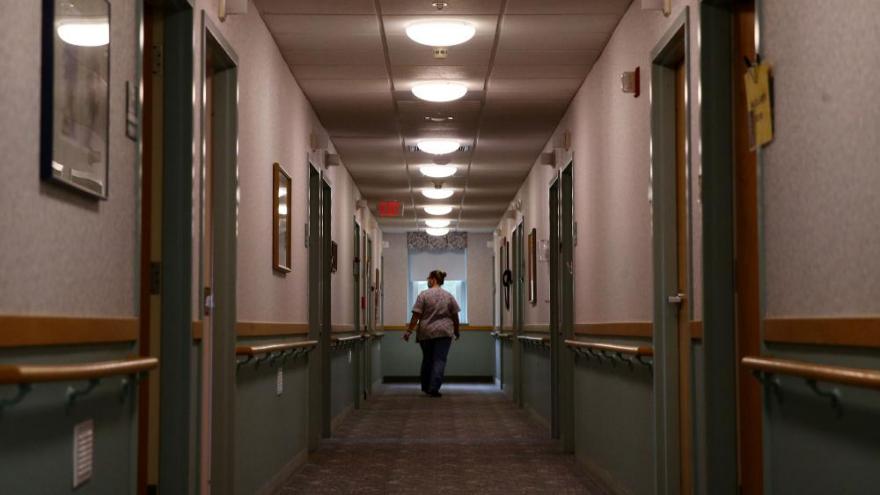 Julie Moore recalls harrowing experiences from the pandemic inside the Philadelphia nursing home where she works.

(CNN) -- Julie Moore recalls harrowing experiences from the pandemic inside the Philadelphia nursing home where she works.

As the virus spread throughout the facility last year, emergency responders came and went regularly, taking yet another resident running low on oxygen to the hospital. Staff members were infected and some died, leaving a facility already running low on employees struggling to keep up with residents' needs.

"It was so few of us in the building that we were just literally running from floor to floor seeing who needed help," Moore, who works as a certified nursing assistant, said. "It was an absolute nightmare."

Covid-19 ravaged nursing homes across the United States -- killing more than 132,000 residents and more than 1,900 staff members as of June 13, according to the Centers for Medicare & Medicaid Services (CMS) -- and it also highlighted the dire consequences that staff shortages in those long-term care facilities can have.

But experts say this has been a decades-old problem.

"Seventy-five percent of the nursing homes had inadequate staffing before the pandemic started," said Charlene Harrington, a professor emerita at the University of California, San Francisco. "It's not surprising that they weren't able to cope with it."

Recruiting new staff wasn't easy before: The pay is low and the work is demanding. In May 2020, the median annual wage for nursing assistants -- most of whom work full-time -- in nursing care facilities was $30,120, according to the US Bureau of Labor Statistics.

"It's a very hard job and no one wants to come to do that job specifically for the amount that we're paid now," said Chaunte Jones, a certified nursing assistant in Michigan.

And the pandemic didn't make things easier. A June 2021 survey from the American Health Care Association and National Center for Assisted Living (AHCA/NCAL) found 94% of nursing home providers had a shortage of staff members in the last month -- and more than half lost key members of their staff during the pandemic due to workers quitting.

"What you're telling nursing home assistants, nursing home staff, is that they need to work for probably the same amount of pay -- or maybe a small raise, who knows -- and they need to put their lives and their family's lives at risk by going into a nursing home where Covid-19 could creep in at any time," said Michael Barnett, an assistant professor of health policy and management at Harvard T.H. Chan School of Public Health.

Now, nursing home staff across the country are demanding change and better pay and providers are calling on the government for more funding to tackle the staffing crisis.

Patients suffer from the shortages

The long-standing shortage in these positions and high turnover rates left staff members across long-term care facilities scrambling for years to tend to every resident, and they're often unable to finish their tasks each day, Harrington said.

Federal regulations require that facilities have "sufficient nursing staff" with the necessary skill sets to keep residents safe and maintain their well-being.

"Nursing homes are perpetually understaffed and the reason for that is because there are no federal minimum staff-to-patient ratio standards," said Richard Mollot, executive director of the non-profit Long Term Care Community Coalition.

And states' minimum standards are "generally well below the levels recommended by researchers and experts to consistently meet the needs of each resident," according to a 2020 report co-authored by Harrington.

The report found that missed care -- often a symptom of staff shortages -- was associated with patients' "adverse events including pressure ulcers, medication errors, new infections and IVs running dry or leaking." It also found facilities with higher nurse staffing levels tended to have reduced emergency room use and rehospitalizations.

"We've documented for over 20 years the terrible care in some of these nursing homes," Harrington said. "And staffing is the fundamental service."

A CMS spokesperson said the agency collects staffing data from nursing homes and uses a star rating system -- available to the public -- to help incentivize higher staffing. If a facility's data shows inadequate staffing, the facility will have a reduction in its rating and will also be subject to unannounced surveys from state officials, the spokesperson said. A nursing home found to have insufficient staff can also face money penalties and be cut off from Medicare payments, the spokesperson said.

But the problem isn't just getting more staff in the door -- it's keeping them. Moore says that even when her Philadelphia facility recruits new staff members, the low wages and heavy workload mean they often don't stick around too long.

"I walk around the facility now and I barely know the people that are working in there because it's like a revolving door now," she said.

"One thing is clear," Barnett, from Harvard, said. "Nursing homes were not helped by the extremely volatile and tenuous nature of nursing home staffing that we went into the pandemic with, and things got worse."

Experts say several factors are driving the shortages and high turnover numbers, and principal among them is low wages.

"It's historically been a sector that has not been valued," said Dr. Robyn Stone, the senior vice president for research at LeadingAge, an association of non-profit providers of aging services. "And I think that that creates a lot of challenges for both thinking about adequate compensation, the attractiveness of the sectors for people to work in. And so, it all sort of has fed on itself."

The ongoing staff shortages are "emblematic of the systemic neglect of the nursing home system," said Barnett.

"The most important aspect of that neglect is how little nursing home workers make, especially certified nursing assistants," Barnett said. "They are the ones who are predominantly immigrants, people of color. It's a huge workforce and they're really -- they're critical for nursing home care because they're the people who are turning people, cleaning them, helping them get up, helping feeding them, those kinds of tasks."

But nursing homes point to their own sources of funding as a big reason behind their workers' pay -- in particular, Medicaid reimbursements.

While some Americans do pay for nursing homes on their own, most of the facilities' income comes from Medicaid and Medicare. Medicaid reimbursements, determined by each state, pay for long-stay residents, who make up the majority of the nursing home population, while Medicare reimburses facilities -- at generally higher rates -- for short-stay patients who are usually there for rehabilitation services.

"Everyone knows that Medicaid underpays," said David Gifford, chief medical officer for the American Health Care Association (AHCA), which represents assisted living and long-term care facilities. "Salaries are about 70% of our revenue overall and so we just can't offer competitive salaries compared to hospitals and other settings."

And with many surgeries canceled this year because of the pandemic, nursing homes across the United States saw resident numbers drop, while costs -- including new ones, associated with Covid-19 protocols and protective equipment -- climbed.

"Our occupancy levels are down 15% and those are typically your short-term rehab Medicare patients, and that would traditionally help offset the losses you had in Medicaid, and that's just not happening right now," said Kristen Knapp, a spokesperson for the Florida Health Care Association, which represents some homes that had to freeze admissions because of staff shortages.

Some experts point out that without strong federal minimum staffing standards, for-profit homes -- which make up roughly 70% of the industry -- are incentivized to operate with less staff to cut back on their costs and boost profits. A 2016 report co-authored by Harrington said the "profit incentive has been shown to be directly related to low staffing," adding that for-profit facilities operate with less staff and more quality deficiencies than their non-profit counterparts.

"For-profit companies are not likely to increase staffing on their own unless they are required to by government," Harrington said.

Gifford said for-profit facilities tend to have lower staffing levels but take care of a slightly higher number of Medicaid patients -- which he said makes a difference "between being able to afford higher staffing levels and not."

"We're all for hiring more staff. I hear every day from our members that they would like to hire more staff, but they don't have the reimbursement from Medicaid," he said.

A historically undervalued -- but vital -- job

The AHCA/NCAL has been pushing for more funding for nursing homes -- particularly better Medicaid reimbursements -- from Congress and state governments. The group is also calling for Congress to help offer better incentives for staff members in the industry, including loan forgiveness and tax incentives.

And in March, President Joe Biden called on Congress to allocate $400 billion to expand access to affordable home- and community-based care.

"These investments will help hundreds of thousands of Americans finally obtain the long-term services and support they need, while creating new jobs and offering caregiving workers a long-overdue raise, stronger benefits, and an opportunity to organize or join a union and collectively bargain," a White House statement said.

In Philadelphia, Moore was among hundreds of nursing home workers who protested last month across Pennsylvania for stronger staffing requirements and higher wages. And nearly 1,000 nursing home staff members across the state voted this month to go on strikes that a local worker's union says come in response to a crisis of "unsafe staffing."

"Nursing is not just about changing somebody or giving somebody some medication," Moore said. "It's also about companionship when you're working in these facilities. And we don't have the time to do it."

But while staff say they've long felt undervalued and overlooked, experts say their jobs are critical -- and will remain so in the coming decades, when America's older population is projected to nearly double.